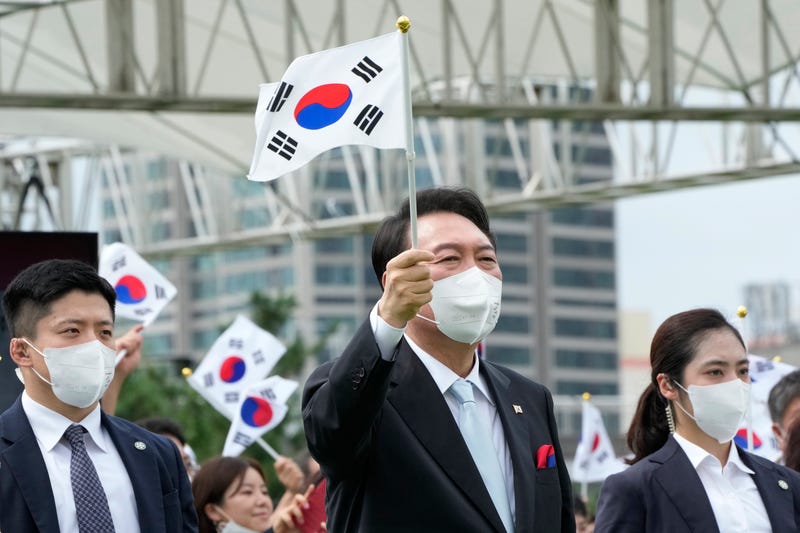 SEOUL, South Korea (AP) — South Korean President Yoon Suk Yeol offered “audacious” economic assistance to North Korea on Monday if it abandons its nuclear weapons program, while avoiding harsh criticism of the North days after it threatened “deadly” retaliation over a COVID-19 outbreak it blames on the South.

In a speech celebrating the end of Japan’s colonization of the Korean Peninsula, Yoon also called for better ties with Japan, calling the two countries partners in navigating challenges to freedom and saying their shared values will help them overcome historical grievances linked to Japan’s brutal colonial rule before the end of World War II.

Yoon’s televised speech on the liberation holiday came days after North Korea claimed a widely disputed victory over COVID-19 but also blamed South Korea for the outbreak. North Korea insists leaflets and other objects flown across the border by activists spread the virus, an unscientific claim Seoul describes as “ridiculous.”

North Korea has a history of dialing up pressure on South Korea when it doesn’t get what it wants from the United States, and there are concerns that North Korea’s threat portends a provocation, which could possibly be a nuclear or missile test or even border skirmishes. Some experts say North Korea may stir up tensions around joint military exercises the United States and South Korea start next week.

Yoon, a conservative who took office in May, said North Korea’s denuclearization is key for peace in the region and the world. If North Korea halts its nuclear weapons development and genuinely commits to a process of denuclearization, South Korea will respond with huge economic rewards that would be provided in phases, Yoon said.

Kim Tae-hyo, Yoon’s deputy national security director, said Seoul is willing to provide economic rewards at each step of a phased denuclearization process if North Korea commits to a denuclearization “roadmap” and proceeds with the “freezing, declaration, verification and dismantlement” of its nuclear weapons program.

Yoon’s proposal isn't meaningfully different from previous South Korean offers that have already been rejected by North Korea, which has been accelerating its efforts to expand its nuclear weapons and ballistic missiles programs, seen by leader Kim Jong Un as his strongest guarantee of survival.

“We will implement a large-scale program to provide food, providing assistance for establishing infrastructure for the production, transmission and distribution of electrical power, and carry out projects to modernize ports and airports to facilitate trade,” Yoon said.

“We will also help improve North Korea’s agricultural production, provide assistance to modernize its hospitals and medical infrastructure, and carry out initiatives to allow for international investment and financial support,” he added, insisting that such programs would “significantly” improve North Korean lives.

Inter-Korean ties have deteriorated amid a stalemate in larger nuclear negotiations between North Korea and the U.S. which derailed in early 2019 because of disagreements over a relaxation of crippling U.S.-led sanctions on the North in exchange for disarmament steps.

North Korea has ramped up its missile testing activity in 2022, launching more than 30 ballistic missiles so far, including its first intercontinental ballistic missiles since 2017. Experts say Kim is intent on exploiting a favorable environment to push forward his weapons program while the U.N. Security Council is divided and effectively paralyzed over Russia’s war on Ukraine.

North Korea’s unusually fast pace in weapons tests also underscores its brinkmanship aimed at forcing Washington to accept the North as a nuclear power and at negotiating badly needed economic benefits and security concessions from a position of strength, experts say. The U.S. and South Korean governments have also said North Korea is gearing up to conduct its first nuclear test since September 2017, when it claimed to have detonated a nuclear warhead designed for its ICBMs.

In the face of the growing North Korean threats, Yoon has vowed to bolster South Korea’s defense in conjunction with its alliance with the United States and also strengthen security ties with Japan, which also is alarmed by the North’s nuclear and missile programs.

South Korea’s relations with Japan declined to post-World War II lows over the past several years as the countries allowed their grievances over history to extend to other areas including trade and military cooperation.

While Yoon has called for future-oriented cooperation with Japan, history may continue to pose an obstacle to relations. The countries have struggled to negotiate a solution after Japanese companies rejected South Korean court rulings in recent years to compensate South Koreans who were subject to wartime industrial slavery, an issue that could cause a further diplomatic rupture if it results in the forced sales of the companies’ South Korean assets. Even as Yoon called for improved relations with Japan, his Foreign Ministry issued a statement expressing “deep disappointment and regret” after three members of Japan's Cabinet visited and prayed at Yasukuni Shrine, which honors Japanese war dead, including some convicted war criminals. The shrine is seen in South Korea as a symbol of Japanese militarism.

“In the past, we had to unshackle ourselves from Imperial Japan’s political control and defend our freedom. Today, Japan is our partner as we face common threats that challenge the freedom of global citizens,” Yoon said. “When South Korea and Japan move toward a common future and when the mission of our times align, based on our shared universal values, it will also help us solve the historical problems that exist between our two countries.”

While Washington has said it will push for additional sanctions if North Korea conducts another nuclear test, the prospects for meaningful punitive measures are unclear. China and Russia recently vetoed U.S.-sponsored resolutions in the U.N. Security Council that would have increased sanctions on the North over its ballistic missile testing this year.

Kim said the countries’ relations were forged by Soviet contributions to Japan’s World War II defeat and that they were strengthening their “strategic and tactical cooperation and support and solidarity” in the face of enemies’ military threats. Putin said closer ties between the countries would help bring stability to the region, the North’s official Korean Central News Agency said.

North Korea has repeatedly blamed the United States for the crisis in Ukraine, saying the West’s “hegemonic policy” justified Russian military actions in Ukraine to protect itself.