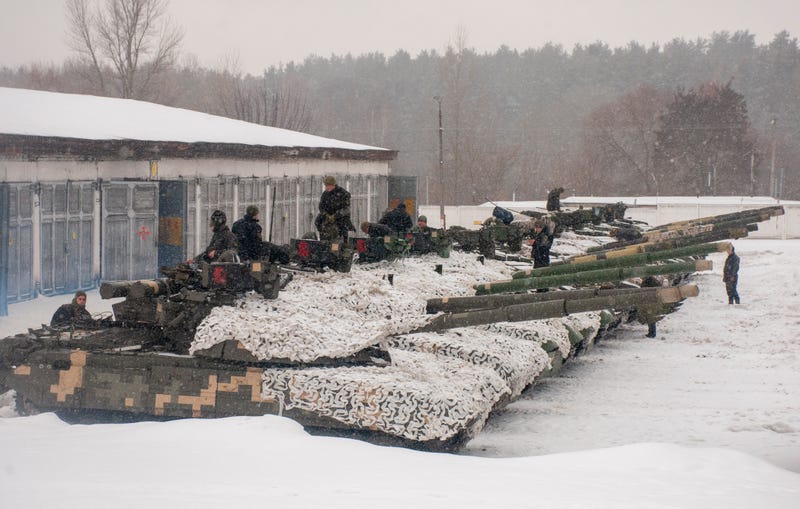 THE HAGUE, Netherlands (AP) — Talks to stave off the threat of war in Eastern Europe moved to the United Nations Security Council on Monday. Russia, a veto-wielding member of the Security Council, dismissed the meeting as a “PR stunt.” The diplomatic push at the U.N. comes with 100,000 Russian troops massed near Ukraine’s border and the Biden administration worrying that Russian President Vladimir Putin will mount some sort of invasion within weeks.

Here are things to know Monday about the international tensions surrounding Ukraine.

Russia accused the West of “whipping up tensions” over Ukraine and said the U.S. had brought “pure Nazis” to power in Kyiv as the U.N. Security Council held a stormy and bellicose debate on Moscow’s troop buildup near its southern neighbor.

U.S. Ambassador Linda Thomas-Greenfield shot back that Russia’s growing military force of more than 100,000 troops along Ukraine’s borders was “the largest mobilization” in Europe in decades, adding that there has been a spike in cyberattacks and Russian disinformation.

“And they are attempting, without any factual basis, to paint Ukraine and Western countries as the aggressors to fabricate a pretext for attack,” she said.

The harsh exchanges in the Security Council came as Moscow lost an attempt to block the meeting and reflected the gulf between the two nuclear powers. It was the first open session where all protagonists in the Ukraine crisis spoke publicly, even though the U.N.’s most powerful body took no action.

U.S. President Joe Biden said in a statement that the meeting was “a critical step in rallying the world to speak out in one voice” to reject the use of force, seek military de-escalation, support diplomacy and demand accountability from every member “to refrain from military aggression against its neighbors.”

The Russian government has sent a written response to a U.S. proposal aimed at deescalating the Ukraine crisis, according to three Biden administration officials.

The officials all spoke on the condition of anonymity. The Russian response comes as the Biden administration continues to press the Kremlin to deescalate the growing crisis on the Ukraine border, where some 100,000 Russian troops have massed.

A State Department official declined to offer details of the response, saying it “would be unproductive to negotiate in public” and they would leave it up to Russia to discuss their counterproposal.

The Russian response comes less than a week after U.S. and NATO officials sent in writing proposals addressing grievances the Kremlin said must be addressed by the West.

The U.S. and NATO, however, held firm to the alliance’s open-door policy for membership, rejected a demand to permanently ban Ukraine from joining, and said allied deployments of troops and military equipment in Eastern Europe are nonnegotiable.

President Biden on Monday said the U.S. continues “to engage in nonstop diplomacy” to deescalate the situation.

“We continue to urge diplomacy as the best way forward, but with Russia continuing its buildup of forces around Ukraine, we are ready no matter what happens,” Biden said.

The U.S. on Monday ordered the departure of families of American diplomats in neighboring Belarus, after already drawing down the American presence around its embassy in Ukraine. Russia has sent troops, tanks and other materiel to Belarus for what it says are military exercises. The deployment raised fears Belarus could be a northern front in any Russian military move into Ukraine.

President Biden met with the ruling emir of Qatar, Sheikh Tamim bin Hamad Al Thani, at the White House to discuss issues including global energy supplies as the U.S. and Europe scramble to put in place backup plans to get gas to Europe if supplies are hit by a possible Russian invasion of Ukraine.

Russia supplies about 40% of the natural gas used in Europe. Natural gas future prices surged last week amid growing market fears that a potential conflict could disrupt Russian exports transiting through Ukraine to the continent.

Qatar is one of the world’s larger suppliers of liquefied natural gas and is among countries that the U.S. is hoping could aid Europe should a Russian invasion of Ukraine lead to Moscow shutting off the flow of gas piped to Europe.

Any Russian invasion into Ukraine would almost surely trigger harsh economic sanctions from the U.S. and its European allies. That could lead to oil and gas shortages around the world and, most likely, higher energy prices that could send tremors through the global economy.

Some women in the Ukrainian city of Kharkiv have vowed to take up arms to defend their nation if there is a Russian invasion and are already training in the use of military weapons.

Svetlana Putilina, the head of an organization for Muslim women in Kharkiv, spends her weekends training with other women how to aim, load and fire automatic rifles and other weapons.

Kharkiv, just 40 kilometers (25 miles) from the border with Russia, is Ukraine’s second-most populous city and some fear it could be one of the first targets in a cross-border attack.

“This city has to be protected. (Russia) has a big appetite and they are taking piece by piece. This should not happen,” said 55-year-old Viktoria Balesina.

Women who have already finished their military-style training aren't resting. They've joined forces to make camouflage netting that can be sent to the front line.

The head of Poland’s National Security Bureau, Pawel Soloch, said that the decision to offer the military support was taken following top-level talks with Ukraine, the United Stats and NATO allies.

“We are talking about political backing, but also about material support in the humanitarian but also in the military dimension,” Soloch said.

The dozens of thousands of rounds of ammunition on offer are for “defense” purposes, Soloch said.

Poland is awaiting Ukraine’s response to the offer.

Follow all AP stories on Russia and Ukraine tensions at https://apnews.com/hub/russia-ukraine