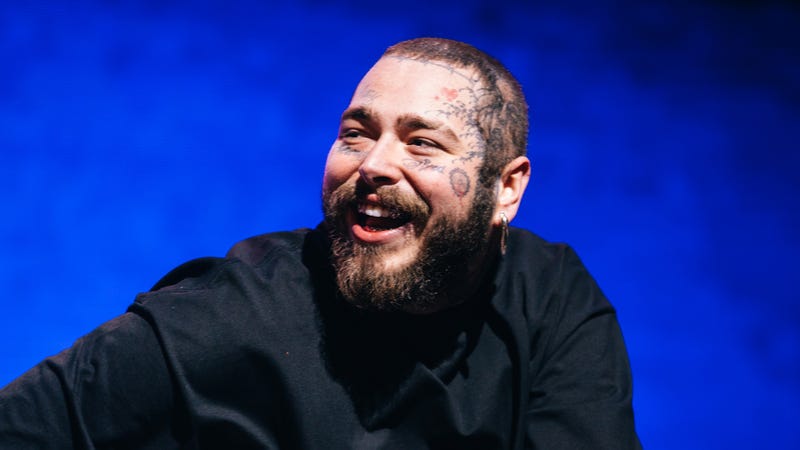 You might assume, given all of his facial and cranial tattoos, that Post Malone would have no problem handling a little hot sauce on his lips. During his most recent visit to First We Feast's Hot Ones, the "Circles" rapper ran the gauntlet and came out on the other side sweating, dancing, and smiling -- although as you could imagine, it was a bit of a supernatural journey.

Listen to your favorite music now -- curated for fans, by fans -- on Audacy’s Post Malone Radio, and more!

Let's all remember for a second that this wasn't Posty's first spicy rodeo. Back in 2016, Malone had his rosé-shaded sunglasses flipped upside-down when he was first introduced to Hot Ones host Sean Evans' torturous lineup of fire juice. Now happier than ever and ready to take on the world with a new album and a baby on the way -- Malone returned for another shot to test his mettle against a brand new roster of abusive condiments.

During their talk, Posty and Sean got into a discussion about Malone's recent move away from the hustle and bustle of Hollywood to the wild hills of Utah. Unfortunately, there's still quite a bit of action that he's been forced to deal with in the form of a "big mamma cougar" getting onto his property. Also, aliens. "Not like a physical alien," he clarifies, "but like a ball. I think it was an alien, or a ghost. We caught it on the infrared camera."

"Does an alien count as wildlife," Malone wondered. "It was so cool. We saw, so we got cameras all around the whole place, and just this big orb... starts taking the shape of Sauron's eye and goes under this door... I don't know what that was," Malone admits, attempting to explain his brush with Lord of the Rings lore. "It's like f***in' 'Dark Souls' whenever I go outside," he laughs. "It's like 'Elden Ring,' I don't know what the hell I'm gonna find out there!"

Towards the end of the line, Posty had some trouble with the final sauces but powered through with only a few hallucinations and screams of torment, and eventually gave Sean advice about some of the equipment he might need if he wants to hunt any paranormal activity of his own. "All of this stuff, Sean Evans, is just a legend," Malone says laughing while pacing the room. "I'm not a scientist," he adds, but "there's definitely something going on that we don't know about." Watch the full episode above. Post Malone's forthcoming album, Twelve Carat Toothache -- featuring collabs with The Weeknd, Roddy Ricch, Doja Cat, Gunna, Fleet Foxes, and The Kid LAROI -- is due on shelves and streaming services June 3. Check out the tracklisting below.

Reputation
Cooped Up (ft. Roddy Ricch)
Lemon Tree
Wrapped Around Your Finger
I Like You (A Happier Song) [ft. Doja Cat]
I Cannot Be (A Sadder Song) [ft. Gunna]
Insane
Love/Hate Letter To Alcohol (ft. Fleet Foxes)
Wasting Angels (ft. The Kid LAROI)
Euthanasia
When I'm Alone
Waiting for A Miracle
One Right Now (with The Weeknd)
New Recording 12, Jan 3, 2020