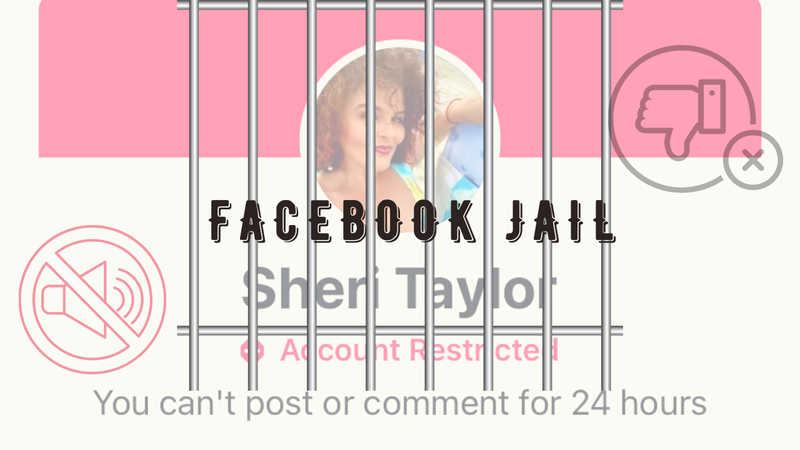 What happens to a content creator who replies to a Facebook post and the reply is taken out of context? You get 24 hours in Facebook lock-up, but you also get one heck of a premise for a story.

In a very basic job description, I can describe my job as I get paid to run my mouth and make people laugh. However, with that same mouth and sharp wit, I was sent to my room or into "time out" as a child. The idea was to think about what I did wrong and the consequences of my actions.

I am always quick with a joke or a rebuttal. It's part of being on the radio, I have to be able to think on my feet and create a theatre of the mind. Let's just say that from an early age, and a few hundred trips to my room to "think about things", I have been practicing my craft.

This Wednesday morning, I woke up, as usual, scrolled social media for show and blog content. I eventually came across a post that my cousin Danielle posted about a hybrid child of the Arachnophobia/Alien/Predator films invading your home. I commented that I would burn the whole place down as I was running away. I am NOT a fan of any of the aforementioned movies, I have a huge aversion to creepy, crawly creatures.

Other people commented that they would leave the house and all of the contents behind. Others used expletives to describe how they would react to finding such a beast in their house. However, the roving powers that be of Facebook within a matter of minutes decided that my comment went against their standards of violence and incitement. Who knew they were such huge fans of house invading, creepy crawling, nightmare fodder creatures?

Let's be clear here, I was NOT trying to spew any hate speech, or incite violence. If you know me personally, I refuse to talk politics, religion, or my disdain for sweet tea around others. I believe all of those are topics that yes, you may have an opinion on, but you will live a happier life if you just keep it to yourself.

So, as I sat in "Facebook Jail" I learned a few things about the system. Although I am not allowed to post for 24-hours, I learned through coincidence, that I can post from a 3rd party and it will appear on the pages that I manage. I posted to Instagram and it also populated my fan page. I also learned that while I cannot comment on anyone's post on their walls or respond to comments on my previous post, I can like and comment on people's stories.

Throughout my day, I was able to communicate and learn a lot about some of my friends and what individual businesses they are running through their social media accounts.

I am proud of my productivity, I signed up for a few coaching classes online and I may very well be licensed to perform weddings in six states and two territories. I chatted with an esthetician friend of mine, who creates custom lash strips and I now have a set of eyelashes named after me. Who knew when I woke up this morning that I would have so many opportunities ahead of me in a 24-hour period?

One valuable lesson that I learned, is that your friends, who know about your status, can tag you and the post appears on your wall for all to see. Thanks to my BFF Genna, I feel like one of the dogs holding the sign that says 'I ate the couch and went potty on the floor" only I can not give my side of the story for another 8 hours.

They say misery loves company, so I reached out to my fellow offenders about their experiences in Facebook jail. There were so many stories that I cannot contain them all in one article. I will share the full scoop once I speak with my Facebook parole officer. I need to make sure talking about my time isn't a violation, along the lines of "...the first rule of Facebook Jail ... is to never talk about Facebook Jail."

In closing, I'd like to say "well played" to all of my friends who posted some hilarious memes about the Amazon Rocket. I'm pretty sure you saved me from a longer suspension, thankfully, I wasn't allowed to comment or post today.