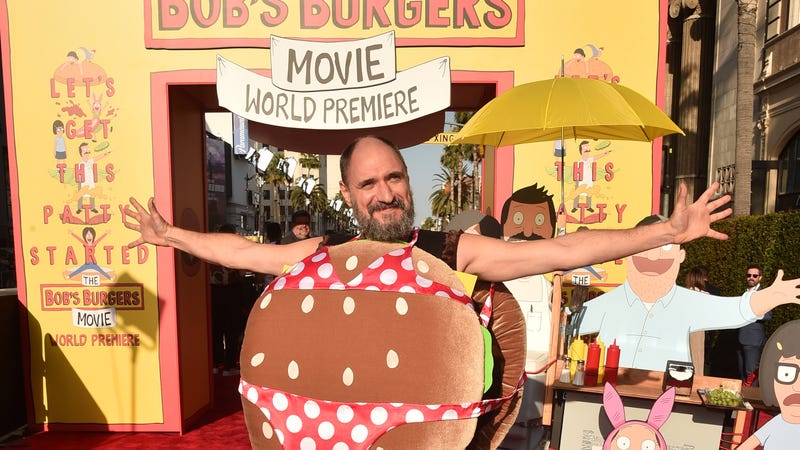 Bob's Burgers creator Loren Bouchard joins the Bullseye with Jesse Thorne podcast this week to discuss the show's creation and lasting impact -- with an official movie now streaming for fans new and old.

Originally released in 2011; whether it's the animation, dialogue, music, or just that deranged, almost feral look Tina gets when she's really on one that makes Bob's Burgers so magical, the show, based around a family's burger business, is without a doubt beloved by fans and adored by critics -- as evidenced by its eleven Emmy nods. Now, if you wanna dazzle, there's a movie! Great for kids, adults, longtime fans, and newcomers alike, The Bob's Burgers Movie hit theaters earlier this year, and is now streaming on Hulu and HBO Max.

This week on the Bullseye with Jesse Thorn podcast, Jesse talks with the show's creator, Loren Bouchard, about what makes the animated series so different from others, the brand new movie of course, and how the cherished show came to be.

“One thing we always knew about ‘Bob’s,’ and we’ve explored it a little bit on the series,” Bouchard explains, “but when we think about this little restaurant -- this family that runs a restaurant that’s barely hanging on -- at the same time we have in the writers room talked about it as if it is, perhaps even unbeknownst to the family, one of the most important places in this little town.”

Loren adds, "we've talked about how this town in a way seems to have a soul, and that, like anyplace, its soul is fragile and could be in peril. How, even though they're a struggling restaurant, and even though they may or may not ever succeed in the timescale that we're exploring, they could still kinda-sorta save the soul of the town. We've basically had this amusement park at the end of the street, that for all intents and purposes, is the soul of the town or an expression of it... and it's right there. You can see it from the restaurant, you can see it in a lot of the images that we give the audience routinely as an establishing shot."

Those scenes are emotionally attached to Bouchard, who remembers theme parks from his childhood as taking on an almost mythical persona. "You sort of take them for granted," he admits. "Back when I was a kid especially, they didn't get historical preservation status, they came and went according to the whims of the people who either go or not go and ride that Ferris wheel and eat cotton candy. Somehow though, at least in my mind, they do take on kind of a higher level of importance when you realize they could go away."

Listen to the full episode -- now streaming on Audacy -- and follow along with Bullseye from NPR, your curated guide to culture, as Jesse Thorn hosts in-depth interviews with brilliant creators, culture picks from our favorite critics, and irreverent original comedy. Bullseye has been featured in Time, The New York Times, GQ, and McSweeney's, which called it "the kind of show people listen to in a more perfect world." (Formerly known as The Sound of Young America.)

Listen to your favorite podcasts and tons of your favorite music on Audacy's all-new stations like Conscious Hip Hop, Let's Get Social, K-Bops, Don't Metal In My Affairs, Collabornation, Audacy New Country, Wake Up and Rock and ALT Roots -- plus check out our talent-hosted Ed Lover's Timeless Throwback and Kevan Kenney's Music Discovery!