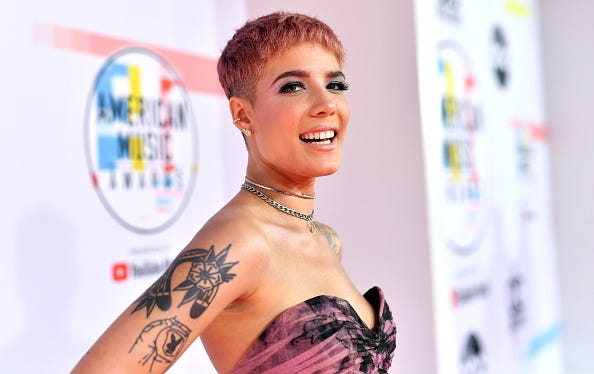 Halsey took to Instagram on Monday to open up about her pregnancy and shut down the haters.

The “Graveyard” singer is expecting her first child this year, with her boyfriend Alev Aydin, but the artist is tired of the speculation and rumors around her pregnancy.

On her Instagram story, Halsey ponders, "Why is it ok to speculate and pass judgment about fertility and conception?” She adds, “My pregnancy was 100% planned, and I tried very hard for this bb. But I would be just as happy even if it were another way."

In January Halsey revealed her pregnancy to the world. While wearing a crocheted rainbow halter top the artist wrote, “surprise!” alongside a bottle, rainbow, and baby emoji.

In 2018 Halsey shared her story about having a miscarriage while on stage. The singer who was diagnosed with endometriosis in 2016 revealed, “I was on tour, and I found out I was pregnant,” during an appearance on The Doctors.

Additionally, during the 2018 interview, the New Jersey native explained that she planned to freeze her eggs so that she’d be able to have a baby in the future.

At the time, Halsey was 23 when she chose to freeze her eggs. “Doing an ovarian reserve is important to me because I'm fortunate enough to have that as an option, but I need to be aggressive about protecting my fertility, about protecting myself," explained the singer.

music
Man faces charges after chopping down 150 trees
music
Taco Bell is going to start reusing hot sauce packets
music
Weezer gives us some of that with new song ‘I Need Some of That’
music
We weren't sure about the Oscars, until we found out Questlove is playing a role
sports
2021 NFL Draft: Mr. Irrelevant odds favor offensive player
news
Latinoamericanos ricos están viajando a EE. UU. para vacunarse contra el COVID-19