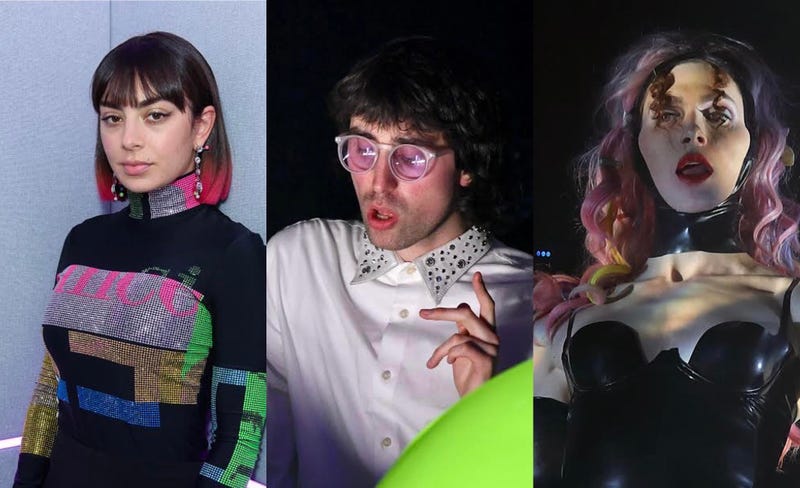 As the sounds of Hyperpop seep into the music we hear across the Pop charts, to understand the expanding subgenre’s roots we’re highlighting some of our favorite artists who have contributed to the rise of this electronically charged, addictive sound. From A.G. Cook to Charli XCX to SOPHIE to Slayyyter these founding figures are spinning up synthed-up tracks and delivering pure auto-tuned magic.

WATCH MORE: Charli XCX's "One Dream" Is For Kylie Jenner To Become A Pop Star

We all know Charli is the Hyperpop queen, leading the charge with tracks like “Vroom Vroom” and her DIY, pandemic project How I’m Feeling Now. Her exaggerated melodies and internet culture-inspired beats make her one of the greats. However, the LA-based Popstar who hails from the U.K. has taken her sound and expanded it beyond pop music. Most recently, Charli has lent her sound to a new project with The 1975 and No Rome where the three artists will come together on an upcoming track called “spinning.”

Dubbed as the “godfather” of Hyperpop, A.G. Cook pushed the celestial and harmoniously chaotic sounds of Hyperpop to the forefront with his label, PC Music, which was founded in 2013. The 7G artist and producer took center stage as Charli XCX’s creative director, producing four of Charli’s most successful projects. The producer has fine-tuned the qualities of Hyperpop and continues to change the landscape of Pop music with his twinkly, sophisticated, and twisted cyberculture sounds.

The legendary producer, who tragically passed in February of 2021 can almost single-handedly be credited for Hyperpop’s rise to the mainstream. Aside from her masterful 2018 LP, Oil Of Every Pearl’s Un-Inside and her vastly influential 2015 Product EP, SOPHIE has produced for artists such as Madonna, Kim Petras, Vince Staples, Charli XCX, and Rihanna. The pioneering artist’s sound has contributed to Pop as we know it today.

The British producer just debuted his newest album Harlecore, which serves as a true testament to rave culture and feels like a little droplet of happiness. The 13-track project derives inspiration from his time under A.G. Cook’s PC Music label. Harle has produced tracks for the likes of Charli XCX and Rina Sawayama.

Dylan Brady and Laura Les have come together to give us the amazingly odd, pop-culture referencing, act that is 100 Gecs. Pulling influence from early-aughts to literally collaborating with Brandon Urie and Rebecca Black, 100 Gecs pushes Hyperpop to its limits on their debut album 1000 Gecs and follows up the madness with a totally poggers remix album titled 1000 Gecs and the Tree of Clues. Honestly, the group’s music feels like one big “you had to be there” meme that boasts some technically incredible production.

The singer and songwriter released their debut album, Flamboyant in 2019 and since then Dorian Electra has been defying what we’ve come to expect from Pop music in the most fantastical, and well, flamboyant ways imaginable. Electra defies the constructs of gender while often using the concepts of the gender binary to craft perfectly garish, campy, and clever tracks within the realm of Hyperpop.

Oh me oh my! Slayyyter is the Hyperpop princess on the rise. Using Soundcloud as her diving board, the “Mine” singer is now preparing to launch her debut studio album, Troubled Paradise, in June 2021. With singles like “Clouds” and “Troubled Paradise” already released, the singer is primed to become another powerful purveyor of Hyperpop.