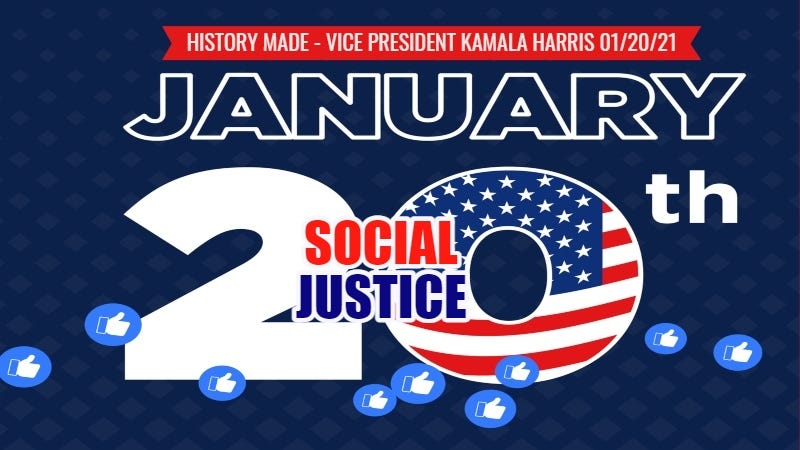 Vice President of the United States. Wife to the first @SecondGentleman. Momala. Auntie. Fighting for the people. #KeepTheFaith

Kamala Harris is the first woman, the first Black American and the first South Asian American Vice President. She was sworn in by the first Latina member of the Supreme Court Justice Sonia Sotomayor. They are both former prosecutors.

Vice President Harris was sworn in on two bibles. One belonged to Regina Shelton, a close family friend. The other to the country's first African American Supreme Court Justice, Thurgood Marshall, who is one of her heroes. NBC News

It's an honor to be your Vice President. pic.twitter.com/iM3BxJzz6E

"...We grieve and begin healing together..."

This evening, as a nation in mourning, we pay tribute to the lives we have lost. pic.twitter.com/u3MXNgDqnf

Our young leaders fuel me with hope for a better tomorrow. #LettersToKamalapic.twitter.com/jYnndIjO3R

Yes she did! #SecondGentleman is ready!

Forbes list of 2020's most powerful women features influential leaders from 30 countries in politics, entertainment, business & more.  U.S. Vice President-elect Kamals Harris made the list for the first time debuting in the #3 slot. "Her rapid ascension in U.S. politics" has "catapulted" her onto the list. - Forbes  12/08/20

Vice President - Elect Kamala Harris tweeted her go-to-cornbread dressing recipe for the holiday season. It's been a hard year, and she like others turns to cooking to cope. Finding a bit of comfort at home. It would go nicley with her turkey recipe.  11/25/20

During difficult times I have always turned to cooking. This year, I wanted to share one of my family’s favorite Thanksgiving recipes with you. I hope whenever you’re able to make it in life, it brings you as much warmth as it has brought me—even when separated from those I love. pic.twitter.com/68LUeat4fE

History happened on Saturday, November 7 when Joe Biden became the projected winner of the presidential election ...

We did it, @JoeBiden. pic.twitter.com/oCgeylsjB4

While I may be the first, I won’t be the last. pic.twitter.com/R5CousWtdx

Known as Vice President Auntie to some ...

music
Saweetie puts it all in motion for stunning 'Fast (Motion)' video
music
Coldplay's Chris Martin is just here to 'serve the songs' for liberated next chapter
music
The moms of Old Dominion spill some tea about their sons
sports
Daniel Jeremiah: Trey Lance 'needs to get out there and play'
sports
Former Mets prospect Jarred Kelenic homers twice in Triple-A debut
music
Everything we learned from J. Cole's 'i n t e r l u d e'