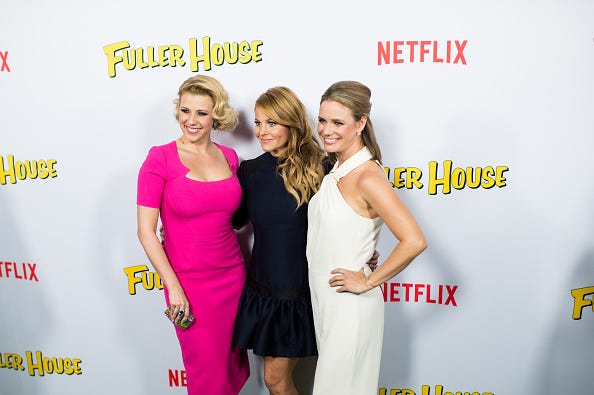 There’s nothing better than spending the holidays with your favorite TV family, the Fullers.

According to TVLine, the first half of the fifth and final season of "Fuller House" will debut on Friday, Dec. 6.

A weekend debut gives fans plenty of time to binge-watch all 9 episodes! The second-half of the season, the final 9 episodes, will premiere sometime in 2020.

When we last saw the Fuller family at the end of season 4, there was a lot happening.

For starters, Stephanie Tanner was officially on her way to becoming a Gibbler. Who would have thought we’d ever see the day?

Not only did Stephanie and Jimmy welcome a baby, courtesy of surrogate, Kimmy Gibbler, but Jimmy proposed in the final moments, leaving much to be explored when the season picks back up.

In addition to a premiere date, Netflix also dropped their preview video for the month of December, which gives us a sneak peak at the upcoming season.

At around the 3:15 mark, you can see Uncle Jesse and Uncle Joey doing the tango.

"Fuller House" wrapped production on the series on Friday, Nov. 15, and it was an emotional experience for the cast, some of whom have been bringing these characters to life since "Full House’s" inception in 1987.

John Stamos honored his TV family with a handful of pictures posted to social media, many of which included the Aunt Becky to his Uncle Jesse, Lori Loughlin, who is currently embroiled in a messy college admissions scandal.

"The end of an era … again,” Stamos wrote. “Last night was final taping of @FullerHouse. When every single network and streamer said no to a Full House re-boot, (and I mean ALL of them) @netflix said yes! And they were kind enough to let us play for five seasons!"

Jodie Sweetin, who plays Stephanie Tanner, shared similar sentiments writing, "I know this will never happen again... this special magic that is Full and Fuller House. The family we created will last the rest of our lives. So, while I may not see them every day like I have been, I know this family is never far from my heart."