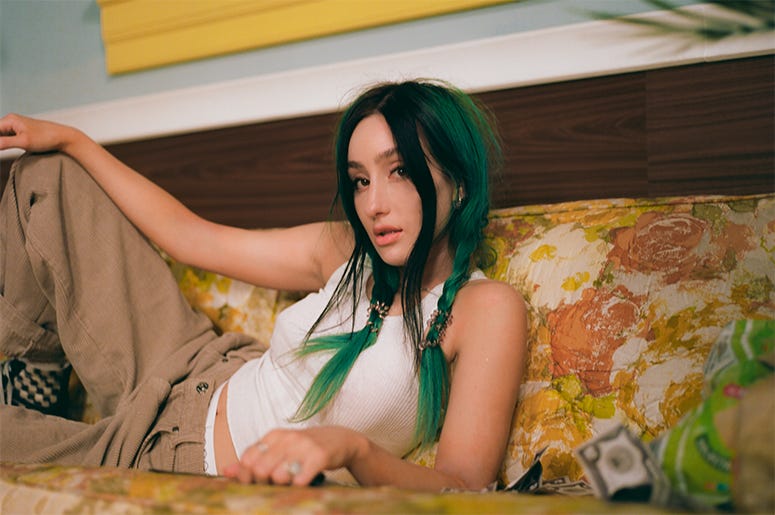 Just text the word "UP" if it's cool, or "DOWN" if it's not to 55701 and help us build your alternative playlist! (Standard messaging rates may apply)

Los Angeles-based Phem is in simplest terms an enigma. The writer, vocalist and producer identifies with no sexuality and carries a residual Catholic school guilt instantiated in the wounded tension and torrid conflict that haunts her music. Her opaque missives capture the chaos of the years before releasing songs that would end up accruing millions of plays, trying to find a working artistic compass.

Before her recent success, she spent a year living between her car and her studio space in the Crenshaw District of LA. Most of her nights were full of isolation and fear. Richter scale bass from other tenants often interrupted her sleep. These surroundings left their own stain, adding to the liminal and ethereal float of her songs. During this period, she attempted to understand the fluidity of both her creativity and sexuality.

Constant bouts of disconnect and alienation led her to bury herself in music, meditation, and prayer. Inside this claustrophobic window-less studio room, the answers started to slowly come, a splintered psyched re-configured itself through the discovery of the gifts of solitude. For Phem, this self-discovery has paid off.

Over the past couple of years she has both been featured on and co-wrote songs with a slew of artists including G-Eazy, Machine Gun Kelly, Lil Tracy and Iann Dior. She has toured the world supporting artists such as Lil Xan and Grandson. Phem has also become a regular contributor in John Feldmann's camp, writing a song on The Used's Heartwork and most recently Jxdn's single 'So What'. It was her own VACUMHEAD EP released last year that racked millions of streams and gained her a cult following of teens inking her name on their limbs. And somehow she accomplished all this while remaining completely independent.

Having remained somewhat quiet in 2020, Phem is now rolling out her EP titled “how u stop hating urself pt 1” that will drop on 12/4. It features 6 tracks, two of which feature MASN who’s single “Psycho” went viral on TikTok while amassing over 102M streams on Spotify and Iann Dior, who is riding the wave of a number one record with his single, “Mood.”