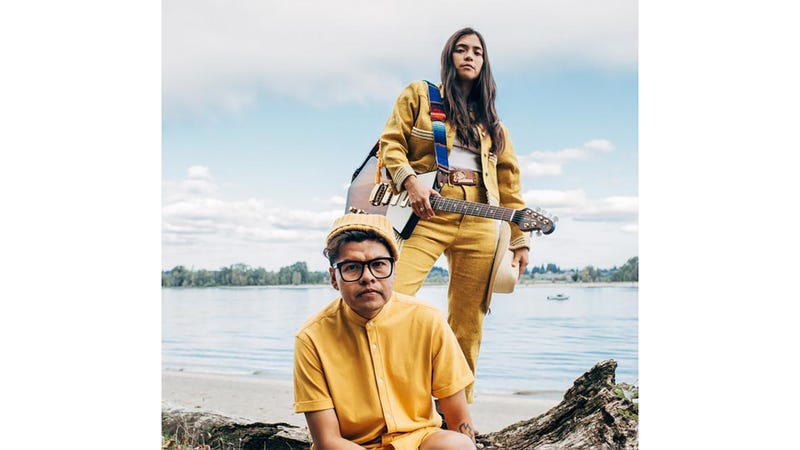 This week's Alternalido Artist Spotlight is with one of host Canyon Cody's favorite bands -- Reyna Tropical. You'll know he's serious if you've been following along with our weekly playlists. Los Angeles and Portland musicians Fabi Reyna and Nectali Díaz (also known as Sumohair) met during the 2016 Red Bull Music Academy Bass Camp, hosted at Tennessee's Bonnaroo festival. "It was a privilege to be a part of," says Díaz. He explains the now-defunct program as one that "hand-picked different creatives and music makers from different parts of the U.S. and bring them together in a camp where they had them meet up and make music and create."

"We hit it off the first night," Díaz adds. "The first day we went into the studio and recorded... and it's been magic ever since."

You would think the duo may not have a lot in common, both coming from different cities, but it's quite the opposite. Reyna says that because she grew up as an only child, they have a fun relationship; "I kind of feel like Sumo's my brother," she says. "In that sense," she says, "we don't really text, but when we meet up it's just immediately a vibe. We don't have to necessarily talk anytime before meeting up. We usually meet up every three to six months, probably. We like that spontaneous situation to see what happens in that moment and let the moment speak for itself." Fabi adds, "so yeah, we just make sure it's sunny wherever we are."

With notable tropical influences in their sound, Díaz spoke of the inspiration behind his music, admitting the French/Spanish musician Manu Chao has made a huge impact on his own production. "When I decided to start making music," he says, "I've always been obsessed with World Music, culture, and sounds from the Amazon... the whole cultural package has always been something that's fascinated me a lot. So whatever I make has to have that tropical feel -- and when me and [Fabi] met it was like... it was perfect. Reyna, it's her last name, but 'Reyna' without looking at how it's grammatically spelled, it means 'queen' in Spanish. So, 'Tropical Queen'... it's perfect!"

Watch the full interview with Fabi Reyna and Nectali Díaz above and stay tuned for more Alternalido Artist Spotlights right here on Audacy.