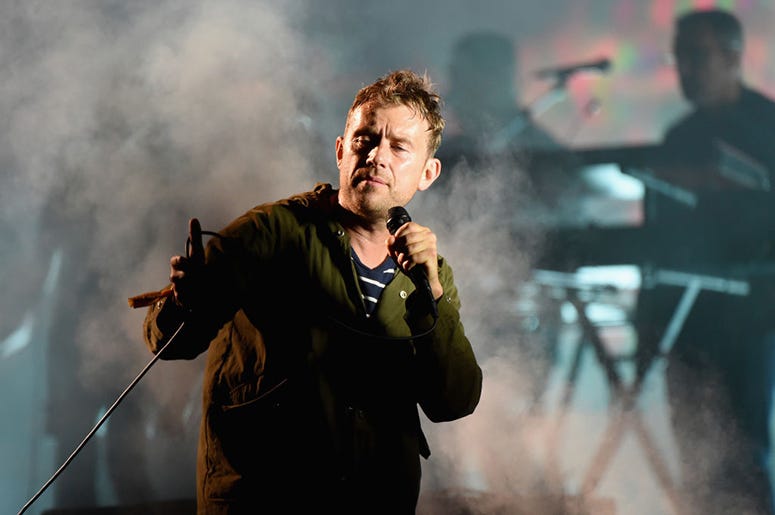 From his Brit-pop beginnings with Blur to the high-definition style of Gorillaz, frontman Damon Albarn has been at the forefront of music for the past 30 years. While we know him as the principal songwriter in the latter, some of the virtual "band members" have had something to say about that over the years.

Speaking with Bryce on RADIO.COM's New Arrivals show he explained, "it's very much their band, but we obviously help facilitate their band."

Gorillaz have taken a new approach to releasing music on their latest effort, Song Machine: Season One – Strange Timez, feeling more like a television series rather than a normal album. Released on October 23, the record is a collection of "episodes" from their Song Machine project and features collaborations with Robert Smith of The Cure, St. Vincent, Elton John, Peter Hook of New Order/Joy Division, JPEGMAFIA, Beck, and more.

Regarding his first experience with the ever enigmatic Beck, Albarn remembers, "It was probably a long time ago. I've been a fan of his since probably 1993... when he did those first couple of albums before 'Odelay.' He was such an inspiration back then, for all of us in Blur."

"The last time I really had a chance to hang out with him was in Brazil in 2012 or something and we had a really good chat. Ever since then I think we've been on each other's radar of maybe one day we'd work together."

They finally did work together, with Beck appearing on the new track, "The Valley Of The Pagans."

"That was a perfect collaboration really," Albarn says. "That's the great thing about Gorillaz, everyone is allowed to do whatever they want. There's no constrictions, really."

As the legend goes, Gorillaz was born after Albarn and designer/animator Jamie Hewlett consumed too much MTV, decided they could do it better, and drew up a "manifesto" of their plans.

"It was a late night manifesto, and neither of us could really remember what was on it," Albarn confirmed with a laugh. "We can't find the document. We speculate from time to time."

Aside from the 2019 documentary Reject False Icons which gives fans a behind the scenes look at the band and its intricacies, one of the things that Gorillaz have consistently talked about but have since failed to bring about is a full length, scripted movie.

"Well, we are supposed to be making a film while we're doing season two (of 'Song Machine')," Damon admits. "We signed contracts, we've begun scripts and stuff. Making an animated film that's kind of abstract is quite a big risk for a movie studio because they're very expensive. If you're telling a slightly obtuse story that only sometimes makes any sense, it's quite difficult. That's what we've discovered."

"We will do it, we are doing it," he says. "I see a lot of people doing animated videos these days but I don't think they really touch the quality of ours."

Gorillaz' 2010 album Plastic Beach, which also featured guest appearances galore was spoken of at the time as an unfinished storyline. Albarn says in fact there are "loads and loads of songs" based off the environmentally conscious concept.

"I think sadly, more than ever the need to keep reminding people that we need to change our habits; to somehow help our climate is really necessary. So maybe I need to revisit it, really. I don't think we can ever leave 'Plastic Beach.' I'd like to just have an album called 'Clean Beach,' but at the moment it's still 'Plastic Beach.' So 'Plastic Beach 2' is a nice idea for me creatively but it's also really depressing... but it's necessary."

Listen to the full interview above and be sure to pick up or stream the new Gorillaz tracks on Song Machine: Season One – Strange Timez -- available everywhere now.

RADIO.COM's New Arrivals is your destination for what's next in the Alternative landscape. Pairing new music from the artists who define today's sound against tomorrow's voices, on a given night listeners can expect not only first plays and premieres from future favorites, but also exclusive interviews with among the most prestigious of the genre's talents. Early guests include Kevin Parker of Tame Impala, Damon Albarn, 100 Gecs, Phoebe Bridgers, Robin Pecknold of Fleet Foxes, Romy of The xx, James Blake, and more.

Airing Sunday nights at 10PM ET (midnight, Los Angeles) the program is hosted by Bryce and is available on all your favorite RADIO.COM Alternative stations.