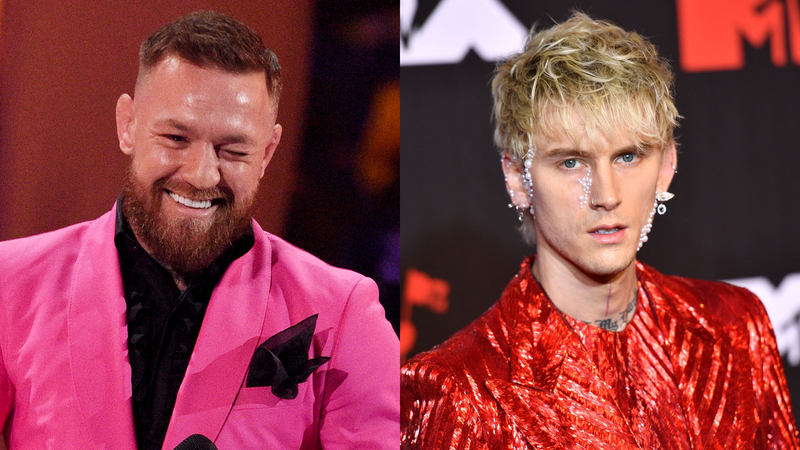 So besides that Lil Nas X performance, Doja Cat’s worm outfit and Megan Fox and Kourtney Kardashian introducing Machine Gun Kelly and Travis Barker’s performance of “Papercuts” by calling them their “future baby daddies,” the most buzzed about moment of the evening wasn’t actually planned, but it was caught on camera (kind of).

Listen to your favorite music now on Audacy and in support of Team MGK check out Audacy’s Machine Gun Kelly Radio exclusive station.

Yup, footage and photographs of Conor McGregor trying to get into a physical altercation with MGK on the VMAs red carpet surfaced Sunday night. So obviously we must find out all the deets and share them with you, duh.

According to a Page Six spy the two reportedly “got into a fight at the top of the carpet” and “had to be pulled apart.” The source also added, “They scuffled, then it settled down and Conor went for him again.”

Obviously something went down, because there’s proof. But the one thing that’s still uncertain is — umm why? We know fighting is McGregor’s thing, but we kind thought he saved it for the ring or whatever.

Despite the photographic proof, McGregor’s rep denied that any fight went down, telling Page Six “Conor only fights fighters,” which Conor also mentioned to Entertainment Tonight on the red carpet, calling MGK “a little vanilla boy rapper.” Which If you wanna get technical, it is kinda true, the not fighting part that is, because the two never actually got to that part before being pulled away from each other.

We do know that McGregor got petty and tossed his drink at Kelly, which was actually recorded, so we know it’s real.

Conor McGregor throws a drink at MGK on the red carpet (via ig:laurademytrk) pic.twitter.com/H0naCNbMta

Anyway, the “fight” ended as quickly as it began and Kelly was seen walking the red carpet with his GF Megan Fox, showing off their usual PDA shortly after, so all is right with the world.