As countries around the world continue to deal with the massive undertaking of testing their populations, identifying those who have been infected with the novel coronavirus, and tracing any people who may have been in contact with them in order to stop the spread, the United States has been taking a markedly different approach.

Rather than test and trace, it is the current administrations purview to reopen and win, seemingly regardless of the cost. This includes children.

Parents need to get back to work in order to put food on the family table, and kids need to be able learn in a safe, stable environment, surrounded by peers in order to gather up those necessary life- and social-skills so they can ultimately succeed as human beings.

High school drop out and Foo Fighters frontman Dave Grohl knows this as a fundamental truth, and not just because his mother was a public school teacher -- but that certainly helps. So, he took it upon himself to pen an open letter in The Atlantic, 'In Defense of Our Teachers,' to make his case. 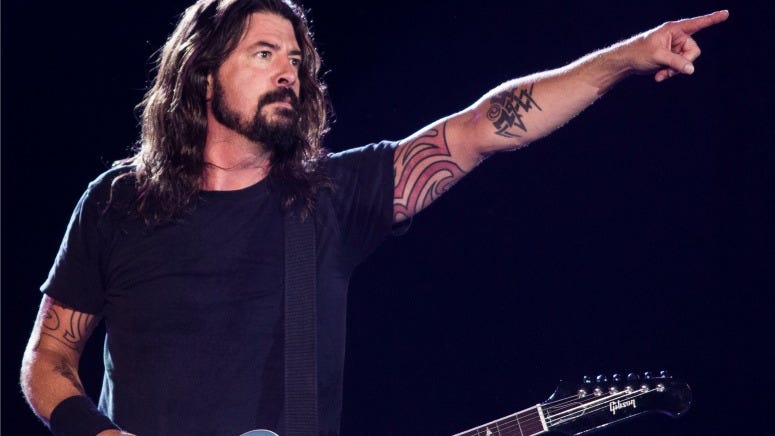 Dave Grohl Confirms He Plans to Eventually Write a Memoir

Although Grohl admits that he was not the greatest student in his formative years, he understands the incredible influence that a good -- no -- GREAT teacher can have on their students. He still gets people coming up to him to tell stories about how his mother had changed their lives.

"As a single mother of two, she tirelessly devoted her life to the service of others, both at home and at work. From rising before dawn to ensure that my sister and I were bathed, dressed, and fed in time to catch the bus to grading papers well into the night, long after her dinner had gone cold, she rarely had a moment to herself," he explains. "All this while working multiple jobs to supplement her meager $35,000 annual salary."

"It takes a certain kind of person to devote their life to this difficult and often-thankless job," he continues. "I know because I was raised in a community of them. I have mowed their lawns, painted their apartments, even babysat their children, and I’m convinced that they are as essential as any other essential workers."

"Some even raise rock stars," he exclaims, listing off Rage Against the Machine guitarist Tom Morello, the Haim sisters, Maroon 5's Adam Levine and singer Josh Groban as just a few celebrity children of educators.

Dave's plea in all of this is to give teachers the respect and dignity of a well thought out plan that they so deserve when it comes to the task of reopening schools. “There’s so much more to be addressed than just opening the doors and sending them back home,” Dave's mother, now retired at 82-years-old says as she explains to her son the list of concerns she has for her fellow teachers. “Masks and distancing, temperature checks, crowded busing, crowded hallways, sports, air-conditioning systems, lunchrooms, public restrooms, janitorial staff,” are all things she believes need to be addressed before any classroom doors are swung open.

Her suggestion? “Remote learning for the time being.”

A plan, which Dave's mother had to prepare three times a day for her students (public speaking, AP English, and English 10), is necessary in his view before reopening schools can begin. But as of now there is no plan coming from leadership, just reopen.

"America’s teachers are caught in a trap, set by indecisive and conflicting sectors of failed leadership that have never been in their position and can’t possibly relate to the unique challenges they face," says Grohl. "I wouldn’t trust the U.S. secretary of percussion to tell me how to play “Smells Like Teen Spirit” if they had never sat behind a drum set, so why should any teacher trust Secretary of Education Betsy DeVos to tell them how to teach, without her ever having sat at the head of a class," he asks.

"Teachers want to teach, not die, and we should support and protect them like the national treasures that they are," says Grohl. "For without them, where would we be?"

You can read Dave's full open letter here, and listen to his emotional plea, below.