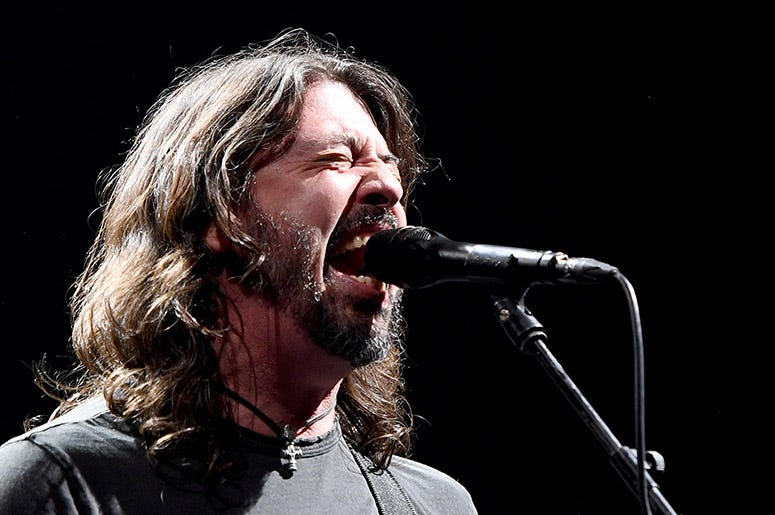 In a dark and manicured corner of The Roxy Theater, crew members wearing PPE from head to toe paced across an empty stage trailing wire. XLR cables snapped, sneakers squeaked and millions of monitors across the US buzzed with anticipation for a Saturday night, November rock show.

These aren’t the sights and sounds most loyal Roxy patrons come to expect from the venue famous for breaking such generational acts as The Ramones, Guns N’ Roses and 25 years ago to the day, the Foo Fighters. The Seattle-based Rock group returned to the Roxy and played a socially distant live stream show, celebrating a quarter century of high energy organic rock.

They brought that same energy to the intimate, moon blue stage. Things kicked off with Dave Grohl jogging on stage, sporting a pair of cherry red Vans and tight black rock wear (t-shirt and jeans). “We made it!” he exclaimed with genuine astonishment. Band members joined him to exchange a few silent glances and meek smiles before the frontman looked into the camera to declare, “Ladies and Gentlemen, the Foo Fighters.”

Just wrapped soundcheck and stream is now open! Log in, adjust your screen, get ready and turn it UP!!! 🤘🍻

“All my life I've been searching for something / Something never comes, never leads to nothing,” Dave sang, as the band tore into their opener, “All My Life.” Rhythm picked up with the stage light patterns and an unbridled sense of momentum began to transform a mostly empty 500 capacity venue into a sold out stadium tour for one; the user.

This wasn’t the Foo’s first virtual concert. They’ve been safely performing across many venues for the past couple of months. Back in October, the group performed for Save Our Stages Festival aimed to help raise funds for venues financially hit by the COVID-19 pandemic. They also visited the Saturday Night Live stage earlier this month. But Saturday’s show at the Roxy proved a great attempt at returning to normal. “I wish you were here. It’s not the same,” Dave lamented. “…because usually I sing this one along with you,” before leaning into a performance of “The Pretender.”

Many aspects of the show seemed implemented to restore a sense of normalcy for the user. Since most tours and live venues shut down due to safety precautions earlier this year, most live stream concerts have resembled half-assed audition tape style performances, sans crowd and excitement. The Foo Fighters seemed aware of this void and seemed to labor over the small details of genuine live events.

Drummer Taylor Hawkins sat perched in his percussion nest, slightly elevated from a fury of chords electrifying the stage. A quartet of backup singers stood in the backdrop, draped in black. Their vocals tied together an ethereal chorus for a classic. “Banging on the ceiling… Banging on the ceiling.”

Another eccentric detail included a synthesized piano interlude during the chorus of “Times Like These.” The group even video conferenced with their monitor engineer Ian Beveridge, while he quarantined in Canada. The whole crew was at the ready.

The group even asked the millions of streamers to get involved during a classic. “This is usually the moment in the song when everyone sings along,” Grohl told the camera, during a performance of “My Hero.”

“But that requires people to actually be here. So, if you hate your f****** neighbors and you hate your f******  roomies, I want everybody to sing ‘My Hero’ by yourself in front of your iPad. I know it seems embarrassing, but you can only imagine what it’s like on stage. Let’s share some of this awkward energy on stage. Because It won’t be long before we get to do this together.”

“That’s some bulls***. You gotta sing louder,” Dave commanded. The road crew filled in for the missing audience, parroting the lyrics and sending the group into a crazed solo explosion of staccato guitar licks and aggressive drum hits.

It was a night filled with standby classics and a few new tracks. “Tonight we might play a little bit of new stuff,” Grohl told the audience of crew hands and a streaming camera. “If you don’t hear something you recognize, it’s likely a little piece of new s***. A little here. A little here. That new record ain’t coming out right now, but we can do this song for you.” With that quick aside, the Foo’s dived into their latest single, “Shame Shame.”

The entire performance was a much needed 12-track catharsis for fans stuck at home, yearning for the good ole days of live shows and slight hearing loss. Dave left a parting message with viewers that seemed to acknowledge that need. “I think if every one looks out for the other guy, shows a little compassion, we’ll be back together soon.”