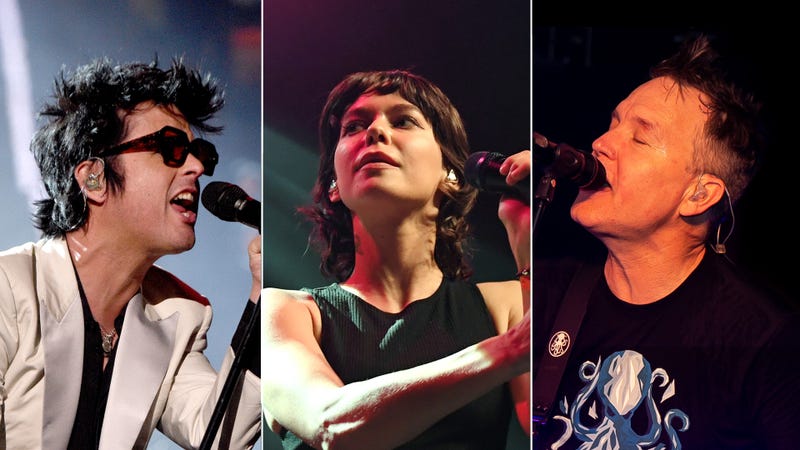 If there’s anything the Internet has taught us, it’s the fact that there is A LOT of music available out there. Almost too much. Almost.

We all have our favorites, and it can become quite easy to get lost in an artist’s collection once you’ve found your groove. But remember, these are artists at heart – and sometimes the work they are known for can become stifling, leading them to find other outlets for their creativity. Enter the ‘Side Project.’

Below are a few examples from some of yesterday and today’s biggest main acts in Alternative that not only provided sweet creative relief for the songwriters but also a look into the wide-ranging musical proficiency of our favorite stars.

Taking Back Sunday, Grouplove, Circa Survive / F***in Whatever

We're kicking it all off with the latest side project to cross our paths. The newly formed F***in Whatever featuring members of Taking Back Sunday, Grouplove, and Circa Survive. It's a dramatic shift from the sound we're used to from each of the contributing band members Adam Lazzara, John Nolan, Anthony Green, and Ben Homola. F***in Whatever dropped their f***in awesome debut single "Original Sin" back in April of 2021 and they arrive on June 4 with their five-track, self-titled debut release which can be pre-ordered now in a variety of formats and merch bundles.

Alex Gaskarth of All Time Low and Mark Hoppus of blink-182 arrived as Simple Creatures in 2019 with their debut EP Strange Love and the full-length follow-up Everything Opposite.

Green Day frontman Billie Joe Armstrong formed The Longshot in 2018 with touring members of his primary band (Jeff Matika and Kevin Preston), along with drummer David S. Field. They've got a number of singles and EP's available, as well as the 11-song full-length Love Is For Losers.

Let's veer off the road for a minute. Breaking completely with their distinct, heavy post-punk sound, Los Angeles' The Bronx have not only released five studio albums under that moniker, but an additional three albums of incredible Mariachi music under the name Mariachi El Bronx. Well worth a trip into this brave new world.

Another sharp turn from the dark, post-punk music fans have become familiar with, AFI's Davey Havok and Jade Puget formed their electronic outfit Blaqk Audio in 2007, releasing their debut Cexcells and continuing on with four more full-lengths. Their latest, Beneath The Black Palms, was released in the Summer of 2020.

If you've ever wondered whether or not Meg Myers was a Star Wars fan, well, say hello to her awesomely named side-project The Meat Wizards with members Ken Oak, Patrick Simon, and Sam Gallagher. She sings about Ewoks, and lightsabers, and Luke Skywalker. What are you waiting for?

Perhaps more of a departure than a side-project, Vampire Weekend's Rostam Batmanglij's sophomore album Changephobia is set for release on June 4 and has already been teased with the singles "These Kids We Knew,” and "4Runner." Rostam's exit from VW to pursue solo ventures was always something he saw as part of his "life path," he told us in March.

The Strokes / The Voidz

2021 GRAMMY winners The Strokes' Julian Casablancas says he's "still on a mission" with his songwriting, "trying to inspire and create inspiration towards... 'a better tomorrow,'" he explained at the end of 2020. Part of that mission is his work with The Voidz, which he also confirmed as having new music being prepared for release this year.

Well after Conor Oberst/Bright Eyes' "Calendar Hung Itself" and just as Phoebe Bridgers became a "Killer," the duo joined forces in Los Angeles, recording a secret album at the end of 2018 under the name Better Oblivion Community Center. The incredible songwriting Phoebe and Conor are each known for apart melds perfectly in their collaborations.

Is a supergroup a side-project? This group features Muse's Matt Bellamy on bass, frontmen Miles Kane of The Last Shadow Puppets and Nic Cester of Jet, guitarists Graham Coxon of Blur and Jamie Davis, and drummer Sean Payne of The Zutons offering up their own modern takes on '60s era classics. It all got started in 2017 out of a necessity to find a solid, and cheap Beatles cover band for guitarist Jamie's birthday bash -- when he realized he could just create one out of thin air with his rockstar friends.