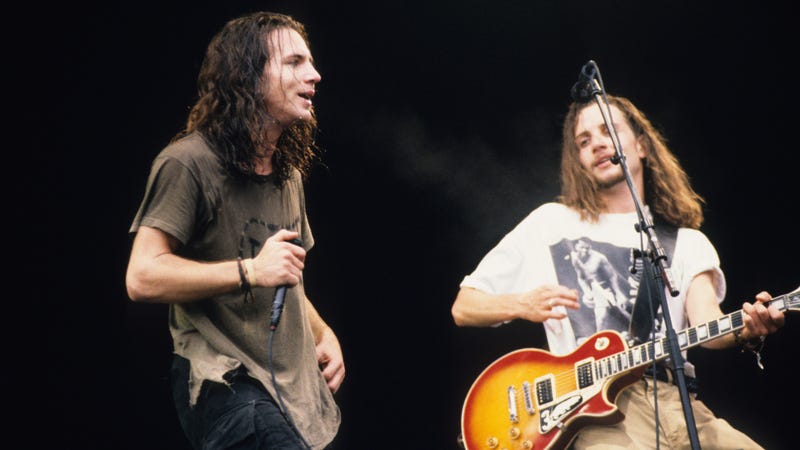 August 27 is an important day in Rock history. Scratch that. It’s a day that changed the course of Rock history.

Listen to Pearl Jam Radio now on Audacy and check out more of our all-new exclusive stations curated for fans, by fans

On August 27, 1991, Pearl Jam said hello to the world with the release of their debut album Ten. While the foundation of the band’s sound was already being built prior to the release of the record, Ten played an instrumental role in bringing the sound of Grunge and Alternative Rock to the mainstream helping it dominate and define the 90s sound.

Oddly enough, the record wasn’t an immediate hit as Ten didn’t achieve its breakthrough until the second half of 1992. At that point, it sent Pearl Jam on a trajectory to stardom. Consistently cited as one of the great albums of all time, several offerings from the record became signature songs that consistently end up on Pearl Jam setlists to this day.

As the album celebrates its 30th anniversary in 2021, we’re revisiting the record with a track-by-track breakdown of every song.

“Once” is a fitting track to mark Pearl Jam’s debut. It’s somewhat of a full circle moment for the band as “Once” is one of the songs guitarist Stone Gossard included on a tape he sent out in hopes of finding a singer. The tape made its way to Eddie Vedder, who at the time was working in a gas station in San Diego. Vedder wound up recording vocals for “Once” along with two other songs and returned the tape to Seattle. The band immediately invited Vedder to come to Seattle and the rest is history.

“Even Flow” is one of the most famous songs in Pearl Jam’s catalog, but it’s also the one recording on Ten the band still may be unhappy with. Bassist Jeff Ament has said he “knew it was a great song all along,” but that it “got the worst take on the first record.” Guitarist Mike McCready has also claimed that songwriter Stone Gossard may still be unhappy with it to this day. "We did 'Even Flow' about 50, 70 times. I swear to God it was a nightmare. We played that thing over and over until we hated each other. I still don't think Stone is satisfied with how it came out."

“Alive” marks the very first single from Pearl Jam as it was released 51 days before Ten came out. Like “Once,” “Alive” was one of the songs included on Stone Gossard’s tape that made its way to Eddie Vedder down in San Diego. Mike McCready’s guitar solo has gone on to become one of the most famous in the band’s catalog and has ended up on numerous “Greatest Guitar Solos of All Time” lists.

“Why Go” continues many of the lyrical themes that have been found up to this point in the album and tells the story of a girl who gets sent to psychiatric treatment against her will. Dealing with the themes of loneliness, anger, and the thought that the rest of the world is crazy, the song showcases Vedder’s storytelling talent.

Perhaps the most personal song on the record, “Black” elicits a variety of emotions in listeners. It was one of the first instances where Eddie Vedder’s brilliant lyricism was on full display. In fact, Pearl Jam refused to make “Black” a single despite pressure from their record company to do so. “Those fragile songs get crushed by the business,” Vedder has said. “I don't want to be a part of it. I don't think the band wants to be part of it.”