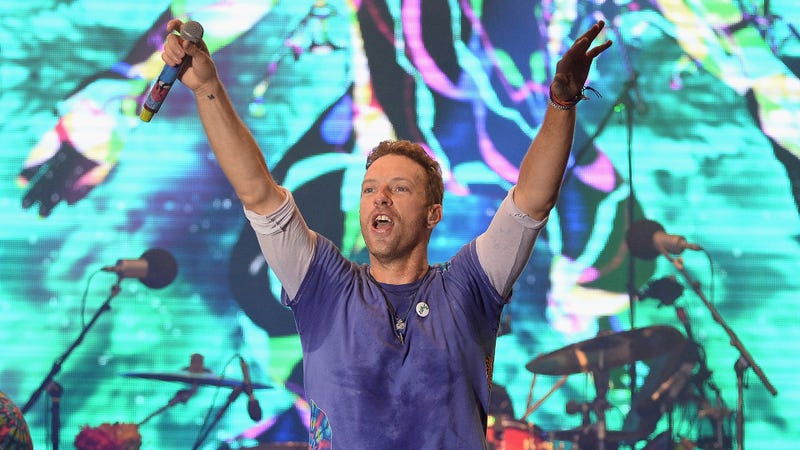 The band, whose brand new single "Higher Power" was teased with otherworldly "transmissions" written in an "alien" language, literally launched the track into the cosmos with the help of French ESA astronaut Thomas Pesquet, live from the International Space Station. You know, in space.

"We sent you some music, because right now we aren't able to play for anyone on Earth, so we thought we would just play for you," singer Chris Martin said in a clip posted this morning. "This is the premiere for the whole galaxy," Chris continues, adding the song's message is about "trying to find the astronaut in all of us, the person who can do amazing things."

Telling Audacy hosts Cane + Corey this morning that the video for "Higher Power" -- which looks as if it were filmed on an imagined planet -- that it's "not necessarily fictional, but yeah, a planet," this latest glimpse into Martin's connections with the cosmos has us truly wondering where he's been hanging out over the past year.

Martin's bandmates (crewmates?) Guy Berryman, Jonny Buckland, and Will Champion joined the conversation as well, which ranged between topics of zoning out in zero-gravity to music and fact-checking sci-fi flicks before Pesquet finally "beamed" the band's video back to Earth. But back to that part about floating with a playlist, though. "In the evenings when everyone goes to bed... I put on my headset and play some music and just float... it's really cool," Pesquet says. "You feel completely free." Ugh, rub it in, why don't ya?

Coldplay's "Higher Power" follows their 2X GRAMMY-nominated 2019 album Everyday Life and is available for download and on streaming platforms now. As an added bonus, don't miss the band this Sunday as they join this season's semi-finalists on American Idol to help them take on some Coldplay favorites for Mother's Day, leading up to a special performance of the new single.