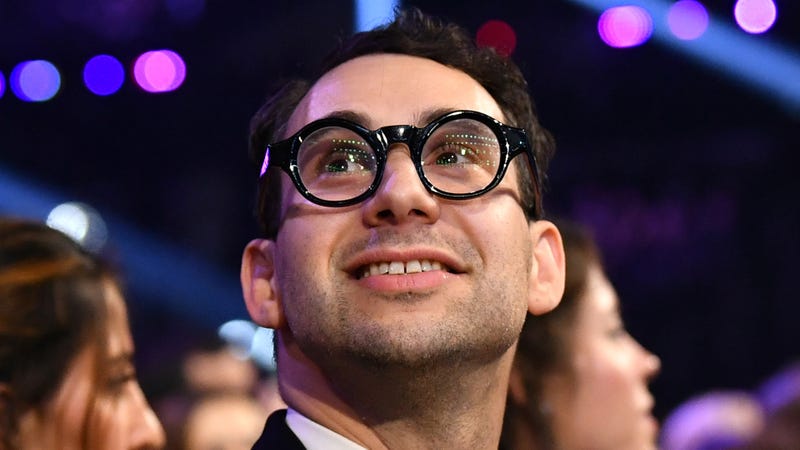 When he's not producing for the likes of Lorde, Taylor Swift, Lana Del Rey, St. Vincent, and more, singer/songwriter/multi-instrumentalist Jack Antonoff gets busy with his band Bleachers.

Antonoff's Bleachers are making their return this year with a forthcoming, third full-length album titled Take The Sadness Out of Saturday Night scheduled for release on July 30, and the newly released single, "Stop Making This Hurt."

Jack kicked off the conversation by asking Audacy's New Arrivals host Bryce Segall about his tattoo, which you can't see here but trust us, he's got one and he's accepted as fact that he can't be buried in a Jewish cemetery. Jack, also Jewish, believes that rule is a "myth." He says, "I feel like that's something we were told -- I checked in on, at least the cemeteries where my family is buried and they're like, 'no you can get buried here with a tattoo.' I call bulls***. I think it was just decided that they were gonna run this myth."

Jack has no tattoos himself, "I don't have tattoos, because I don't want tattoos," he says, "I just never thought of anything I wanted to get, which is weird because I love drawing on myself... so it's really weird that I love to do that but I have no interest in tattoos."

With the ink-talk out of the way, Jack got right into his process preparing songs for a new full-length Bleachers release. "It's a lot," Jack admits regarding the undertaking compared to dropping one-off singles. "You know, you don't have to make albums; you make them when you feel like you have something to say. I think, inherently, albums get tied to intense moments in life. If things are just chugging along, and nothing's really going on, then at least in my experience, I don't feel very compelled to make albums."

"The whole theme of this album," Jack says, "is about I'm sort of knocking at this door at the next phase of my life I'm trying to get through. There's a lot of joy and excitement about that, and there's also the realization that you bring everything with you, you bring all your baggage. When you're standing still, cool, everything feels good. When you want to move and you want to grow and jump forward, you inherently feel whatever weight is on you because you're moving."

Touching on some of his inspiration for the record, Jack says, "I think my favorite songs come from how hard it is to live, and then how much joy there can be in living -- and how they're both at play at all times. Big feelings make you want to write songs, so when you're really low you take something from there, and when you're really high you take something from there. But albums, I feel, come from breaking through to a different space."

"You don't have an album, in my opinion, until you understand where it's going and why it's existing, because you could have 50 songs and not have an album," he continues. "The first thing I started to feel was, OK, this album is being written from a low place, grasping at hope. So, the journey is trying to get there; moving from darkness into light. That's big; then I started to realize, I had written this song 'Chinatown' early on which is about falling in love again and taking that person to where you're from to show them the most unvarnished version of yourself. So, then I'm actually moving sonically from New York to New Jersey and that became a theme. So the album moves from darkness into hope, New York into New Jersey; it moves from a present into a future -- but the route it takes into the future is to go home."

Drawing parallels to the collective experience of slowly crawling out of a pandemic, Jack says "we're all looking for cultural upsides to what we've been through." Before the pandemic everything we could have wanted was at our fingertips; "Martin Scorsese makes movies for me, on my couch," he jokes. "Culturally, everyone loved it... then the pandemic hit... and we can't go do all these things. Here you are saying 'I'm left with only these fruits of the future, and it sucks. This to me was the great cultural connection which is, no matter what you can not find me a person right now that's like, 'man, tonight I'm just gonna order in and watch Netflix. That person does not exist, but you can find me a lot of people that want to go out and do things, and see people, and have those things that will never expire. Live music has been my life... and that's one of those things that will never expire."

Looking ahead to the future of live music, Jack admits "it can be a little bit crass to talk about the cultural upsides when something so massive and horrible has happened, but you wouldn't be human if you weren't looking for the positivity and joy. I think we'll see all the movie theaters come raging back; we'll see live shows be better than ever; we'll see just a bit of a reframing of what is isolation, which seems social but actually is isolation versus actually being around people. What it is, is an opportunity and I think there's a chance that everything sort of rockets back to the way it was, but we have a chance here... When it comes to live shows, take down some of the f***ing screens and f***ing play. Seeing a band play is something that 100,000 people can gather in a space and be blown away by, with no nothing. Live music had gotten bloated... I just want to go out there and be with a band now!"

Fans of Jack's work will also remember his band FUN. a project he has always seen as separate from his other musical ventures. When writing songs these days, Jack says the band never comes into his thoughts, much like Oasis is an afterthought now to Noel Gallagher. "I think one of the reasons why that band doesn't exist, is because there isn't that feeling. But that band's also a funny thing, unlike Noel, Steel Train was happening when FUN. was going on, so was Bleachers. I was always funneling the stuff. If I write a song alone, it's gonna be my song. I don't really write songs and think, 'oh, this could be a this song, or a that song.' FUN. was a band effort. But I do often write songs and think, 'this is an Oasis song!'"

Listen to the full interview with Jack Antonoff above and be on the look out for Bleachers' new album Take The Sadness Out of Saturday Night available on shelves and streaming services July 30.

Audacy's New Arrivals with Bryce Segall is your destination for what's next in the Alternative landscape. Pairing new music from the artists who define today's sound against tomorrow's voices, on a given night listeners can expect not only first plays and premieres from future favorites, but also exclusive interviews with the most prestigious of the genre's talents. Early guests include Kevin Parker of Tame Impala, Damon Albarn, 100 Gecs, Fleet Foxes, Romy of The xx, James Blake, and more.