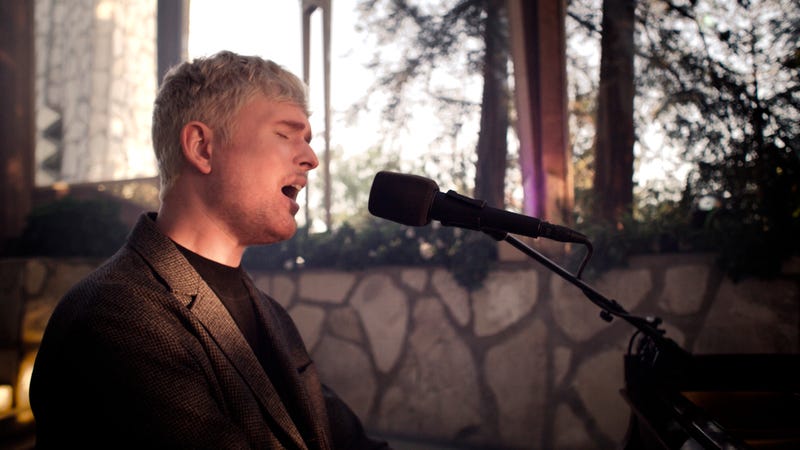 James Blake’s new EP Before is here and the artist delivers dance tracks and fresh vocals like never before.

As Blake joins RADIO.COM's New Arrivals with Bryce Segall, the artist explains “my thing is, with this, I really was just frustrated that I couldn’t go clubbing, I was frustrated that I hadn’t put a lot of dance music out in a long time, you know it was just sort of bottled up music and it had to come out at some point.” He adds, “these songs were all made during lockdown.”

Feeling less pressure and experiencing a sense of boundlessness, Blake’s track title track, “Before” hits his feelings at its core. The sense of limitlessness that exudes from the peaks and valleys of the track feels blissful, even though the record was created during a time of extreme restrictions. “I definitely feel a little bit more settled in what I’m comfortable making. I’m feeling less pressure externally which is always good,” James tells Bryce.

After feeling “boxed in by a sense of seriousness,” Blake tells us he doesn’t believe in guilty pleasures, so much so the artist will indulge in pure pop songs. When asked if there was a pop song he wished he’d written, James tells us “I said ‘Toxic,’ by Britney Spears, and I stand by that… There’s loads of unbelievable pop music that sounds nothing like what I do, that I listen to in the car all the time.”

The “Don’t Miss It” singer is already in the process of creating a follow-up to Before. The next piece will be “stripped back” and a harmoniously different “yin” to Before’s yang, James shares. Plus, Blake has something in the works with Ty Dolla $ign. “What I will say is that Ty Dolla Sign is a f*****g pleasure to work with and be around… I don’t know what it is yet. We made music… who knows… I feel like we’re really at the start of a burgeoning thing and it’s exciting to see where that goes, again it’s a privilege to work with him” alludes James.

WATCH MORE: The Most Surprising Song Collaborations We Can't Stop Listening To

Finally, the singer-songwriter reveals that he’s “made an ambient record.”

“I’ve basically made an ambient album, but I just don’t really know when to put it out, so we’ll see,” says James nonchalantly. He adds, “it's at that point where you go ‘oh this is an album!’” After always wanting to create something in the ambient sphere, Blake sent the record over to the architect of ambient music, Brian Eno. “I wanted to see what he thought and when his feedback was positive, that's when I decided I would put it out one day,” explains Blake.

The record bubbled up from a time when James was feeling stress and anxiety and all he could take in at the time was Eno’s music. “The only thing that would make me calm was either Brian Eno or Ryuichi Sakamoto, and so I decided to just make a bunch of ambient music... I got sick of beats.” describes Blake. He jokes, “I need a beat holiday, so I made all this ambient music and I have to say, ‘I love it.’”

James has worked with Eno before, and describes him as a “guiding light.” Blake tells us, “he gave some constructive criticism and was just very encouraging because you know it's a different genre and you’re stepping into something that you can’t necessarily just nail. Ambient music can be delicate, just taking beats away from music, drum beats I mean, does not an ambient album make,” shares James decidedly.

For more, check out the full interview with James above, and check out New Arrivals, Sunday nights at 10PM ET (midnight, Los Angeles), available on all your favorite RADIO.COM Alternative stations.