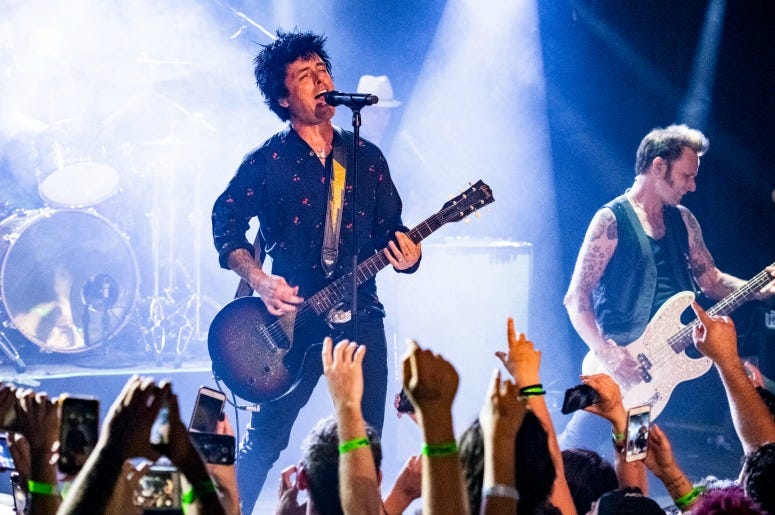 We’re still five months away from Green Day releasing their new album, Father Of All Motherf***ers, but we’re already getting a few hints about their sound. In a string of interviews surrounding the announcement of the HELLA MEGA Tour with Weezer and Fall Out Boy, Billie Joe Armstrong and company have revealed a few details about the loud, fast, and new LP from the rock icons.

“I knew I wanted to do something different,” Armstrong tells Rolling Stone, looking to add some of the soul he was listening to into the follow-up to Revolution Radio. “I’d always loved British mod music from the Sixties, but I wanted to go to where the source was and see if I could put (soul) through the Green Day filter.”

More specifically speaking, it’s the music of Motown and the sonic style of Kendrick Lamar that helped contribute to Father of All Motherf***ers, with Armstrong telling Billboard that both helped guide him to letting rhythm lead the way. With 10 songs clocking in at only 26 minutes, the Rock & Roll Hall of Fame band is speeding back to something new.

“It’s very high energy,” Billie Joe tells Billboard. “We wanted to create a dance groove with space between the drums and vocals the way Kendrick Lamar does things or old-school Motown music, where it’s leading with the rhythm. I realized I hate long songs, anything over two-and-a-half minutes. I’ve had a short attention span my whole life, even though I’ve written s*** like f***ing 'Jesus of Suburbia.'”

The nine minute epic isn’t the only difference between Father Of All Motherf***ers and the GRAMMY-winning album American Idiot. Armstrong explains that there’s no political commentary in the fabric of their new LP, despite it being released in an election year. “I can’t think of anything that’s less inspiring than trying to write about Donald Trump. It grosses me out,” Armstrong says to Billboard. “Everybody knows the way I feel about these things. I like to feel some sense of joy, living through the chaos of the era.”

You feel that joy in the first sample of the upcoming album. The lead single, “Father Of All,” is a burst into the next chapter for the band. “It’s kinda like ‘Hawaii Five-0’ meets Rick James in a certain way,” Billie Joe told RADIO.COM earlier this week. “It’s filtered through the Green Day coffee filter, and it’s loud, it’s noisy, and it’s pure rock n’ roll energy.”

The HELLA MEGA tour kicks off on July 17, 2020 with tickets going on sale on September 20.