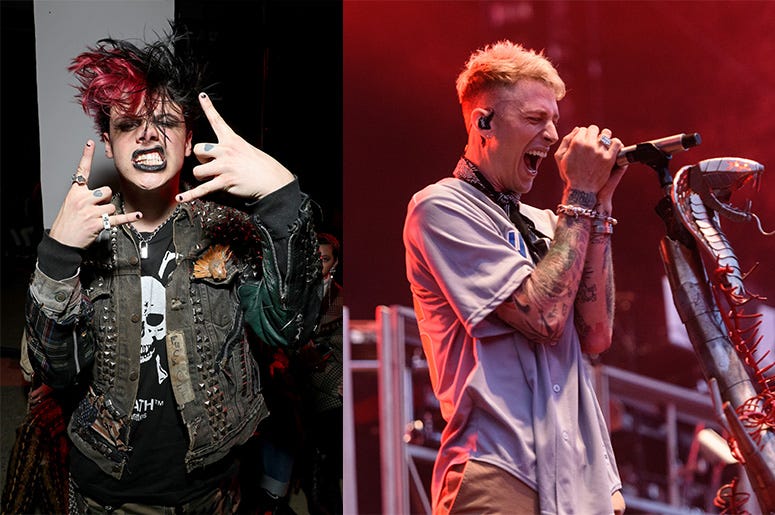 Machine Gun Kelly is drawing on music history to describe the creative relationship between he and YUNGBLUD, comparing them to Elton John and Jimi Hendrix.

"It feels like a dope, across-the-pond thing, like: ‘You hold it down over there and I’ll hold it down over here.’ Together we can make some sort of union of rock stars,” Kelly told NME for a cover feature of the artists.

MGK is referencing the 1960’s cultural shift that took place in the United States and Great Britain. “Good” music before that decade was defined by baritone lounge acts like Frank Sinatra, and trailblazing jazz geniuses like Miles Davis and John Coltrane. It wasn’t till the 1960’s when a younger generation of “Baby Boomers” began to define popular music with a taste for Hendrix’s guitar licks and Elton’s on-stager bravado.

WATCH MORE: MGK digs deep into his emotions while recording 'Tickets to My Downfall'

Kelly believes that same type of shift is occurring at the turn of this new decade. He believes his latest album, Tickets To My Downfall, could be that tocsin for a new generation of music. "This album might be the reason why bands of our generation, instead of the Foo Fighters, Green Day or one of those established artists, get to headline Coachella and s*** like that," he waxed prophetic.

"…Because this album is gonna make the demand for guitar music go up!"

.@machinegunkelly has reinvented himself as a pop-punk star with the year’s biggest guitar record, 'Tickets To My Downfall'. And, he says, we have his girlfriend Megan Fox to thank. Read the full NME interview now: https://t.co/Y4l6gsmYn2 pic.twitter.com/KqVCxla5F7

Yungblud and Kelly previously collaborated on MGK’s 2019 rap album Hotel Diabo. Collaborating with the UK born artist drew an automatic connection between the artists. “His raw voice is so good, and he has an immense love for rock ’n’ roll. Those energies gravitate towards each other.”

Tickets To My Downfall has lit up numerous top 100 charts. MGK is ready for the work to evolve into a musical. Kelly says he’s already finished shooting the film, calling it a "pop-punk Grease" when speaking with NME. "I just shot it in four days with Mod Sun," he says.

"It was my first time directing... It was almost like shooting 14 music videos back-to-back, but with a narrative that's outside of my personal life stories."