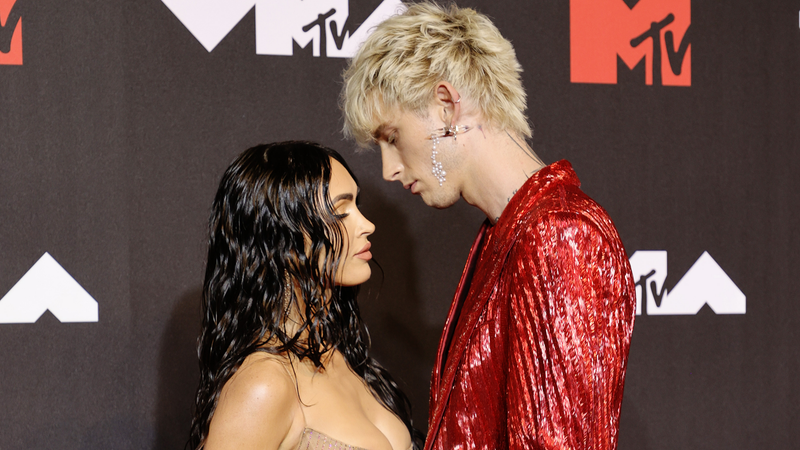 Megan Fox and Machine Gun Kelly, actually Colson Baker in this instance, put their love to the test in the most stressful way possible, by taking a GQ “Couples Quiz" — and trust, it did NOT disappoint.

In a video shared to the publications YouTube channel the twin flames, who grace the latest cover of British GQ Style (that had us SCREAMING), demonstrated their obvious chemistry while asking each other a series of questions to see who knows the other better. Tackling variety of topics, including their tattoos, favorite movies, and their first date. And yes, it’s everything you’d imagine it to be and more.

Fox started things off, asking Kelly questions and while the rocker started of with some struggle only getting 0.5 points on the first question of how many tattoos his girlfriend has, he guessed eight when Fox actually has nine. He then attempting to "redeem" himself with the "bonus" question, but that didn't go so well either.

"What does my back tattoo say?" the caption queen asked Kelly, who replied, "Butterflies have gilded wings.” Megan Fox and MGK give each other matching tattoos, then pose nearly naked and talk about it

"Close, you're in the vicinity," Fox said. "That's not correct, but do you know what it's from?" Kelly then guessed the quote was from Oscar Wilde, to which Fox corrected that it's actually Shakespeare and reads "We will all laugh at gilded butterflies,” adding, “It's from King Lear.”

Despite the questionable start, Kelly went on to answer the rest of the questions correctly, including naming something on Fox's bucket list, revealing she wants to "be abducted by a UFO." Nailing the star's pet peeve (the sound of people chewing #same) and her "favorite movie.”

"If you don't know this, I'm going to be very upset at you. What's my favorite movie now?" Fox said, before beginning to give Kelly a hint. For which he interrupted to let her know it was unnecessary because he already because he knew the answer.

"It's like an eight-series piece. We're talking about Harry motherf***ing Potter," Kelly said. He also didn't hesitate when she asked which of the films is her favorite —"Prisoner of Azkaban.” He did f up the name bit, but we’ll let it slide.

At one point Colson went on to detail the couple's "epic" first "out of the house" date — a picnic in LA's Topanga Canyon. "Our first date was epic. I picked you up in an old-school Cadillac and I had thousands of roses bedded on a hill looking over Topanga Canyon," Kelly recalled. "We ate sushi and we shared a kiss.” Then corrected himself —“Our first date, we breathed each other," he added. "That's what we did.” Ask for their second date, well he left that to our imagination.

One moment we definitely can’t not talk about is when Megan asked MGK what her favorite way to decompress was, for which Kelly replied with a question of his own. "Do you want to tell them what the doctor said?" He asked before Megan insisted, "We cannot say that on camera." And just as it looked like the musician was going to spill the tea, the footage cut out (#sus).

After a few more questions from Fox it was Colson’s turn to do the asking, but we’ll just let you watch the video above for those. We will however leave you with a hint of what to expect, and possibly our favorite moment from the entire vid. One word — meerkat.