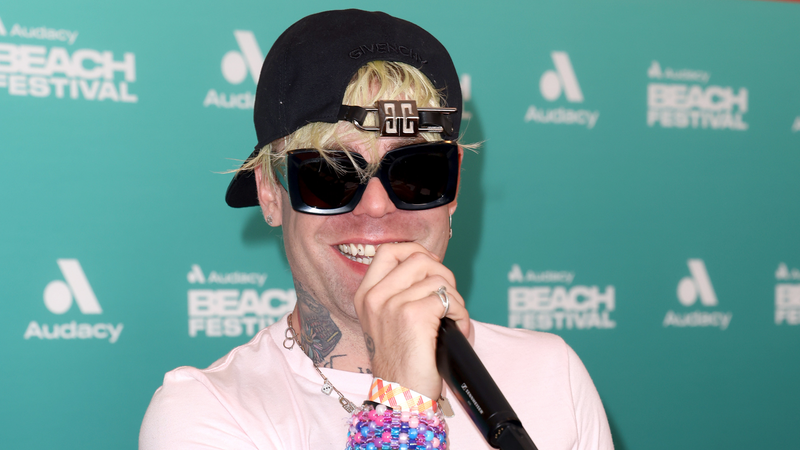 When he wasn’t absolutely smashing it on stage, or busy taking over Audacy Beach Festival socials, MOD SUN took some time to answer a few fan question about mental health, inspiration and the biggest show of his career while hanging out backstage.

Listen to the Audacy Beach Festival exclusive station featuring artists from this year's lineup and more.

One of the questions came from @Shaelynamber, who had a chance to see MOD perform at Red Rocks with Machine Gun Kelly and Jxdn. With it being “such an amazing experience” to watch and knowing that “he’s always wanted” to perform there, she wanted to know how much that show meant to Mod.

“I’ve always wanted to play Red Rocks my entire life,” MOD answered. “I think that was the biggest show I’ve ever played in my entire career so that was just like an honor. Having that dream since he was 15, now in his 30’s MOD noted, “that just goes to show - MOD SUN stands for Movement On Dream - Stand Under None… That was a dream come true, and I’ll be back there again, and imma headline it”

Next, MOD answered a question from @TravisPoet, who was looking for some inspiration from Mod on how to keep striving and “keep things going” and maintaining a "positive mind set” while pursuing your dreams.

As a poet we’re sure Travis was more than satisfied with MOD’s beautifully eloquent response, we know we were.

“I think the thing about art," he expressed, “is that if your doing it from a special place, you can’t really be concerned with how people accept it.” He went on, “I think there’s so much power in being the underdog - I kinda make everything that I do from that standpoint”

“The day you give up is the closest you ever were to making your dreams come true.” Finishing up his thought he said, “I think it’s important to just believe in yourself first and wait for the world to catch up.”

.@ModSun gave one of his fans @TravisPoet some inspiration on how to make his dreams come true when answering fan selfie video questions backstage at Audacy @BeachFestival! 🖤 #BeachFestival pic.twitter.com/9hD3xmYqII

"If you are here right now, you've been given a gift" @ModSun gave one of his biggest fans from Mexico advice on mental health when he answered fan selfie video questions backstage at Audacy @BeachFestival 🖤 #BeachFestival pic.twitter.com/3ThrEEcyI8

.@ModSun loves the idea of having an imaginary friend! He let us know all about it when answering his fan @Ticketstocolson's selfie video question backstage at Audacy @BeachFestival 🖤 #BeachFestival pic.twitter.com/jSD9wUxP6m