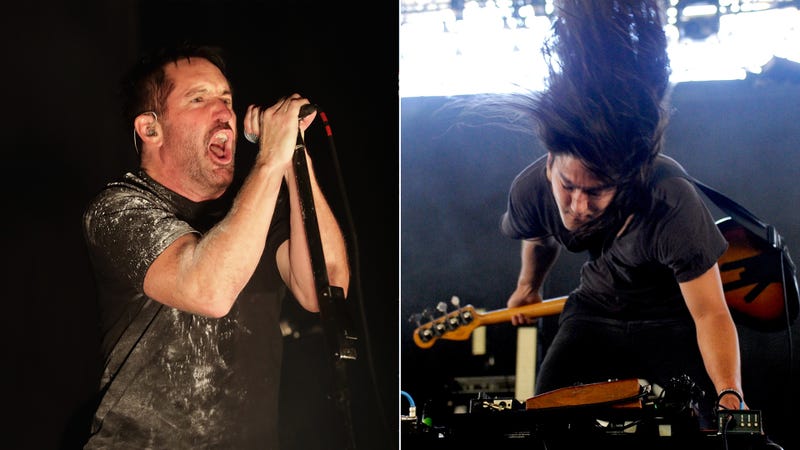 The highly-anticipated collaboration between L.A. noise-rockers HEALTH and industrial rock pioneers Nine Inch Nails has officially arrived. Aside from it being exactly the sound you've been waiting for from Trent Reznor following his ethereal Ghosts releases, the lyrics are also a haunting sentiment for the times we're in.

Immediately following his and Atticus Ross' Oscar win for Soul at this year's Academy Awards, (a feat that has inched him ever closer to the elusive EGOT title) NIИ frontman Trent Reznor said he was ready to dust off the synths and return with more music from his original moniker. That was confirmed with the announcement of a new collaboration with HEALTH this week.

The arrival of the track today should have longtime Nails fans vibrating, as this marks a return to form after 2020's atmospheric releases Ghosts V: Together and Ghosts VI: Locusts. In fact, in this writer's opinion, it's a return to the Nails of old with guitars, drums, and vocals from Trent that remind me of his Downward Spiral days.

The addition of HEALTH (and producer Corin Roddick) into the mix was brilliant as well; with brutal drumming, punishing synths, and beautifully tortured vocals from members Benjamin Miller, John Famiglietti, and Jake Duzsic, I'd argue this trio could just be Trent's backing band for the foreseeable dystopian future.

For those unfamiliar, HEALTH has been destroying speakers with their unique blend of noise, industrial, dance, and shoegaze since first breaking into the scene with Crystal Castles' remix of "Crimewave" in 2007. Now with five studio albums, five remix albums, a video game soundtrack, and a ton of singles under their belt with artists from Youth Code to JPEGMAFIA, a whole new set of electronic rock fans are being exposed to their madness.

Aside from the cult-favorite "STONEFIST" above, which has buckled quite a few dance floors at their concerts (personal experience), here are some recommended tracks to get you familiar: Try "Die Slow," "SLAVES OF FEAR," "We Are Water," "STRANGE DAYS (1999)," and "LA LOOKS."