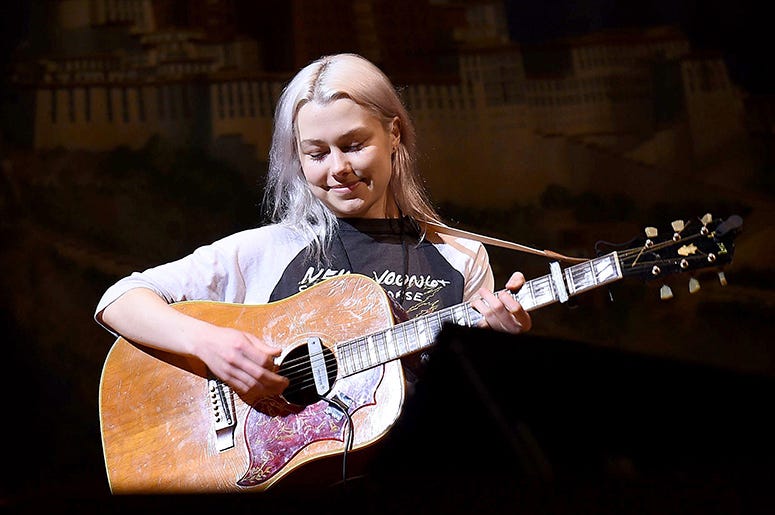 The indie singer is up for four awards at this year's GRAMMYs celebration (which has since been put on hold due to the current health crisis): Best New Artist, Best Alternative Album for her record Punisher, Best Rock Performance, and Best Rock Song for her single "Kyoto."

Let's get the most important question out of the way first: Is Phoebe working on her GRAMMYs acceptance speeches? All joking aside, Phoebe says she hasn't thought much about the possible on-stage moments but knows she will certainly forget to thank someone important. That someone, however, will not be her mother.

"In my eighth-grade graduation speech," Phoebe explains, "I was like, 'thanks to my family,' or whatever and I got punished about it for many years because my mom wasn't mentioned by name."

"Actually, I sang a Townes Van Zandt song instead of my speech," Bridgers admits. "How punishy would that be, to sing a whole song as your GRAMMYs acceptance?! They're gonna send security to my house and shut my computer."

Phoebe is no stranger to Internet rumors, one of the latest being that she is involved in some kind of collaboration with Detroit rapper Eminem. She says, "it's one of my favorite internet rumors to happen this year... so funny. She chalks the absurdity up to Twitter and a bogus, printed out press release that was not too convincing.

Another fun thing on Twitter was this gem of a quote, which Phoebe happened to quite enjoy: "phoebe bridgers is taylor swift for girls who have crumbs in their bed"

Taylor Swift's latest release, folklore, which was a departure from her Pop and Country stylings, featured album credits from the likes of The National's Aaron Dessner, Bon Iver's Justin Vernon, and Bleachers' Jack Antonoff. Both Bryce and Phoebe are fans of the 2020 release, as well as her 2012 album Red.

"I love the record," Phoebe says about folklore. "So many people that I love and respect worked on it, and there's some very specific instrumentation that's the same on her record and my record which I just think is cool. I think it drew more people to my record, also. I mean, I love the songs and I also tend to be more of a 'Red'-era fan... there were eras where I dropped off, but I also think that's kind of a testament to her range." 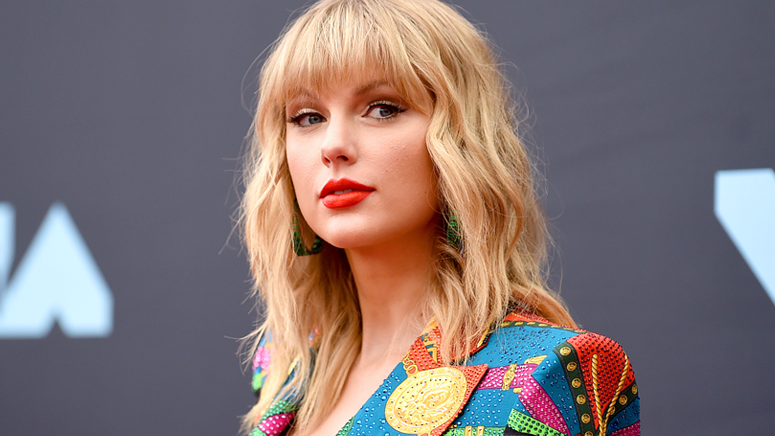 Taylor Swift admits 'Red' is about 'pure, absolute, to the core, heartbreak'

Phoebe says she has thought about taking her songwriting into the Pop music realm the same way Taylor branched into indie rock. "Sometimes I do listen to things that are totally opposite from my music," she explained. "I would love to top-line write for someone ridiculous, as in the opposite of my music. Like, the next Skrillex album I'll be writing some really, really poppy top-line... I'd love that, it would be great!"

Bridgers does however get a chance to write alongside some of her contemporaries, as part of the band Boygenius with songwriters Julien Baker and Lucy Dacus. She's also released music with Conor Oberst of Bright Eyes under their band name Better Oblivion Community Center.

Phoebe says the Boygenius group texts are still happening while everyone is under lockdown, "mostly venting about petty, weird music stuff," she says. "But also lots of positive affirmations. I just opened my mail today from Julien Baker who sent me a My Chemical Romance shirt that says 'Revenge' on the front. Every couple of weeks we get on a Facetime and talk for like five hours, it's so nice. They're two people in the world who have a basically mirrored experience with me."

Serious question: If Boygenius were ever to add a fourth member, á la Crosby, Stills, Nash, and Young -- who would their Neil Young be?

Serious answer: "We've actually thought about that," Phoebe says. "It's (Indiana musician and singer for Big Thief) Adrianne Lenker. She's out there doing her own thing... I feel like we would go on tour and every five years Adrianne would join."

Looking ahead at future releases, and considering her fondness for Metal which can be heard in the undertones of her record Punisher, Bridgers doesn't see herself writing for any specific genre.

"I think I will keep writing songs the same way, which is to keep writing the same song over and over, and I almost think of production as a totally different thing. Because the you have this batch of songs, each record sounds exactly the same, and then you're just like, 'how can we mess this up,' basically. That's the most fun, but the songs have to be good first."

Listen to the full interview with Phoebe and Bryce above.

RADIO.COM's New Arrivals with Bryce Segall is your destination for what's next in the Alternative landscape. Pairing new music from the artists who define today's sound against tomorrow's voices, on a given night listeners can expect not only first plays and premieres from future favorites, but also exclusive interviews with the most prestigious of the genre's talents. Early guests include Kevin Parker of Tame Impala, Damon Albarn, 100 Gecs, Robin Pecknold of Fleet Foxes, Romy of The xx, James Blake, and more.