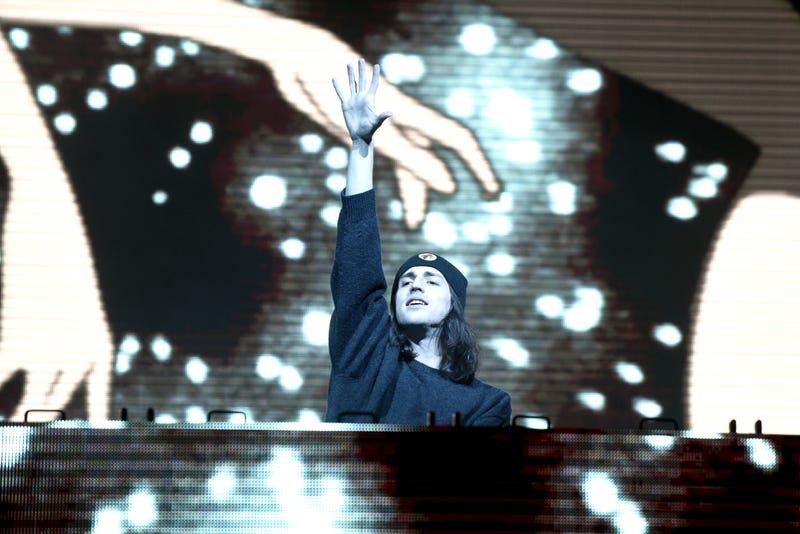 Porter Robinson’s highly anticipated Nurture arrives this April, and aside from a persistent deep yearning for a new LP from Robinson since the release of Worlds, many have been clamoring for the sophomore album since the producer announced the upcoming album during his virtual Secret Sky Music Festival in May of 2020.

In a conversation with RADIO.COM’s Bryce Segall on New Arrivals, Robinson delved deep into the inner workings of Nurture and how the latest collection of songs came to fruition. Sighting inspiration from DJ and producer, Madeon and the film Wolf Children, the artist tells us how he chose to develop the sounds, vocals, and visuals for his new project.

“I remember when Madeon was sending me some of his very early demos for Good Faith, which is some of my favorite music ever… he was like pitching his voice way down… I don’t know if he was thinking of it as being a stylistic thing, or if it was just like how he’d like to get his vocal tone eventually, or whether it was like a fill-in for somebody else to sing, but I felt like that was the coolest thing in the world,” Porter begins to explain. “Being able to do this whole singer/ songwriter/ producer project where you’re singing…. it’s you singing and it’s live, but it’s this kind of character, this ultimate persona… I loved that idea of just having this character sort of just sing with you or this representation of the inner voice.”

Porter took this inspiration from Madeon and applied it to the vocals that now exist on Nurture. The “Something Comforting” artist lays out the idea that “the pitched-up vocals that I’m doing on Nurture, they represent a few different things. Sometimes it’s like a negative inner voice, sometimes it’s like an ideal self, sometimes it’s a purely musical decision where like it just sounds better in a high octave. But I’ve been kind of calling it this digital falsetto because it serves a similar role. It’s this alternate register, but just the way of getting there is different.”

When using his voice to cultivate the proper sound for the new music Robinson shares, “with this effect, where a lot of the vocal melodies and the lyrics… if I sang them in my natural timbre they just wouldn’t come across quite right, but they really worked through this other voice.” He adds, “it’s really nice for me to have these different vocal registers because it gives me options for every lyric, every melody. Like I’ll just kind of babble into the microphone and scream or whisper or just try various melodies and I’ll record like 30 minutes of stuff and then start cutting it up and eventually that’s how it becomes the final vocal melody. That’s one of the few techniques I’ll do.”

While Robinson often employs this technique that involves his own voice, the producer also turns to Vocaloid software, like Hatsune Miku, a piano, or SawWave to “pre-write the melody.” But the producer says, “just as often I’ll just sit there and just hum whatever comes to my mind through heavy autotune and pick up the pieces later.” While there are so many routes to getting to a melody or sound for Robinson, he says having access to this “digital falsetto” has truly been a “game-changer.”

When developing the visual aspects for Nurture, Robinson began working with London-based art director, Samuel Burgess-Johnson. Burgess-Johson, who has worked with artists such as Tove-Lo and The 1975, helped Porter conceptualize imagery that he had been struck by while in Japan in 2016. The look and feel that surrounds Nurture is derived from the aesthetics in Japanese travel posters and subtle hints of Microsoft Paint.

Robinson says that working with Burgess-Johnson was a collaborative effort, adding, “I’m usually trying to push stuff towards the influences I’ve saved from the past. It’s a chicken or the egg situation too… because it’s not like I went to Japan and saw these things and thought ‘oh this is the art direction,’ it’s more like you see things and they match what you’ve already had in your head, or they represent something that you’ve already got with the music.”

However, one of the biggest guiding inspirations behind Nurture and the ecosystem developed around the music is the Japanese anime movie, Wolf Children. “I remember seeing that movie in 2013 or 2014 and thinking ‘this is the direction I’m going to want to take my music after Worlds,’” says Porter decidedly. “It’s funny how five, six years later you can still feel that influence really really strongly.

The biggest polarity between what listeners felt on Worlds versus what listeners can expect from Nurture is Porter’s shift from vastness to experiencing everything “up close.”

Moving towards a more “mindful” existence, focusing more on the ones he loves, and stepping away from what was happening online, Robinson shares, “I had this longing in my art for something that went from far away and beautiful to up close and beautiful and I think it sort of spoke to this need that I was feeling and didn’t yet register for a perception of real life that I could love…and an experience of reality that wasn’t so online and was more real life.”

In Wolf Children Porter was moved by the idea of finding beauty in the day-to-day, and in his own life while trying to improve his mental health those themes of everyday beauty were repeated.

The sounds that resonate from Nurture feel uplifting and light, yet the lyrics often present an opposing view where Porter notes, “in terms of the musical timbres it’s really bright and positive-sounding, but the lyrical content I would say is often pretty tough, and although there’s hope in all of the lyrics it was really difficult for me to write some of these lyrics and to talk honestly about some of the stuff I was going through.”

While dealing with difficulties in his personal life and sharing that he may have been at one of the “lowest points” in his life, Robinson touches upon how he also dealt with unreleased music getting leaked and sheds light on how he went about processing the incident.

“It sucks so bad when your music leaks because people listen to it and they upload it to YouTube like it’s an official release and it gets consumed as though it’s an official song. It’s like that information that it is leaked or that it is unfinished gets lost along the way and, you know we as musicians obsess so hard over the way that we present something. “

He adds, “It feels so sh***y, it feels so bad when you’re not done with the thing, you might not even ever want to share it with somebody and people are listening to it. It’s a terrible feeling and I was really upset about that… In one fell swoop I completely disowned this leaked music... in retrospect, I wouldn’t do that again. I think it was kind of selfish of me… it was so unclear. To me that was so clearly about the leaks and to 99 percent of everybody who didn’t know or didn’t care about the leaks, it was like ‘why is he disowning so much of his music?'”

The producer opens up about his inner anxieties and tells us, “I think I’m just a really emotional person, and I’m a flawed person, and I get really insecure about stuff that I do, and so anytime you see me angry basically I’m actually scared. I’m like scared that my project isn’t connecting, I’m scared that… I’m never going to be able to make anything good again… I feel like that’s useful for people to know. Whenever I’m like screaming about something I’m usually, myself, pretty scared.”

Additionally, the Virtual Self artist went into how he’s been processing the tragic passing of the trailblazing Pop producer, SOPHIE. “I’ve gone back to SOPHIE’s music in these last few days and it still really doesn’t feel real,” shares Porter somberly. He says, “I think that SOPHIE had this presence when she was alive that felt kind of immortal and the music is so aesthetically consistent and like the world is so robust. Some of the themes of artificiality that SOPHIE’s music played on kind of makes it feel like it can’t be true, that music feels physical, it just feels so immortal and it’s really hard for me to process it.”

As we have all faced difficulties and mourned losses both great and small, one of the burning questions on everyone’s mind these days though is when we will get to experience respite from our sorrows and feel the release and freedom that live music often provides?

For Porter, he has begun to imagine what new live music experiences will look like stating, “in my mind’s eye for what the Nurture live show might look like is maybe something a bit like the “Get Your Wish” music video… I plan to be singing and I plan to be more upfront… with Worlds, I’m very much behind the table and in Nurture, I want to have a little bit of both. I want to have moments where I’m exposed as possible and really look people in their eyes, and really sing these songs out as best I can. That’s the feeling I find myself longing for when I think about that show.”

“Having gone this long without live music I think Nurture live is going to take a very different shape than it would have if there hadn’t been a pandemic to be honest... .my desire for fun is a lot higher than I think it would have been.”

The official music video for "Look at the Sky" launches as a world premiere on Wednesday, February 10.