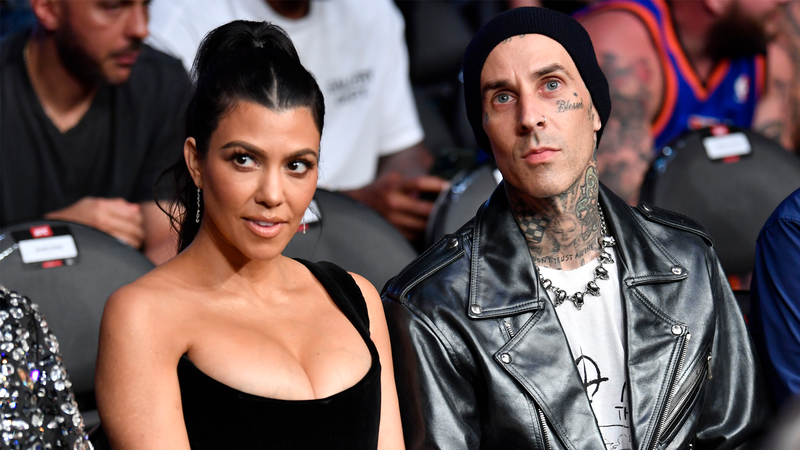 Honestly, we truly didn’t think the vibe between Travis Barker and Kourtney Kardashian could get any hornier than her sucking on his finger, but… here we are.

Since debuting as a couple earlier this year, Kourt and Trav have developed a habit of regularly posting PDA pics. So perhaps we shouldn’t be so shocked that when the camera was pointed at the duo during Saturday’s UFC 264 fight in Las Vegas, they went for a tongue only French kiss, that coulda been hella sloppy, but weirdly was kinda not. At the same time, a simple kiss would’ve also been sufficient, but whatever they’re in love, so to that we say - you do you boos.

The hottest ticket in town! 🔥🎟️@TravisBarker, @KourtneyKardash & @JustinBieber just some of the stars shining at #UFC264! pic.twitter.com/zl857Xwbt3

Like we said, there was a lot of tongue and very little qualms affectionately showing the world just how much they love one another, which is a giant leap from Kourtney’s previous relationship with French model Younes Bendjima, and that’s about all the press we’ll give him.

UFC fights are easily becoming “the hottest ticket in town,” not just for who’s in the octagon, but also for who’s in attendance. And with Saturday’s match ending uneventfully sooner than expected, obviously the most memorable part of the night was Kourtney and Travis’s frisky business.

Other celebrities in attendance during the fight, which saw Conor McGregor get stretchered away after suffering a round 1 leg injury to Dustin Poirier, included Justin Bieber and Dave Chappelle, among others.

Well, one thing is very clear in this whole situation. Kardashian and Barker are very comfortable around one another. And frankly, it seems like they don’t care what anyone thinks. So if like us, that’s what you’re into, feel free to join us in one of our current pastimes - lurking on Instagram account @KravisDailyfor a steady flow of nonstop Kravis content. Oh, also check back here because clearly talking about it while offering up our personal take and witty banter, is one of our current pastimes as well.