Well, no one can say Twenty One Pilots﻿ fans aren’t punctual.

The Ohio band have officially ended their scavenger hunt, albeit way earlier than they thought, and are now rewarding fans with the fruits of their labor.

Launched on June 12th with a 24-hour YouTube livestream featuring a television screen flashing mysterious imagery, the scavenger hunt directed users to the landing page of an alternate reality game, the goal of which was to find a total of 20 codes. Three million people tuned into the broadcast and dedicated fans had the Twitterverse buzzing with clues and discussion, trending for 12 hours with over 150k tweets.

In a post on their social media channels, the band admitted, “we didn’t think you would tear through the codes so easily. Should have taken a week but you did it in just over 12 hours.”

we didn’t think you would tear through the codes so easily. should have taken a week but you did it in just over 12 hours. you got us this time. now join in with your footage, your art, your dances, and be a part of the first ever never-ending music video. https://t.co/Xnj87g4Gks

This hunt was no simple task: Virtual USB drives with zip files containing images, videos, and symbols taken from the band’s personal phones were offered as clues, codes were hidden in the closed-captioning of the official “Level of Concern” music video, while another was hidden in the spectrogram of an audio file. That’s not all, one clue was even hidden inside a glitched photo file, when opened in a text program contained coordinates to locations around the world. When plugged into Google Maps that let fans piece together another code. Once all 20 codes were unlocked, the flood gates were opened.

Now we can all enjoy the first-ever, never-ending music video created with the help of the Skeleton Clique.

Livestreaming now on YouTube, the groundbreaking video for the band’s quarantine hit “Level of Concern” is the first of its kind - fan created content is uploaded and inserted in real time, with a “new” video being dropped every three minutes and forty seconds.

Conceived by Twenty One Pilots, alongside award-winning storyteller and director Jason Zada, the concept was to find a unique way to connect with fans during the current stay-at-home orders, and provide them with an opportunity to share meaningful moments. To upload your own footage, click here and follow the directions to instantly appear. 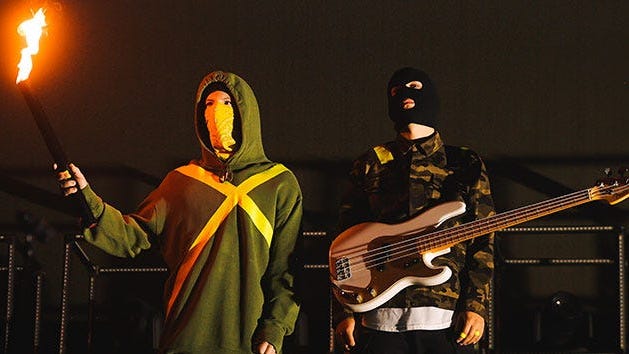 Despite the problems we are all facing daily, Twenty One Pilots have been hard at work in 2020, delivering new babies, new music, new marriages, and fun content for fans stuck inside without the live experience of one the genre's most powerful forces.

When life returns to normal, you can rest assured Twenty One Pilots will be ready to rock with their fans --- but until then, go ahead and make your own unique mark on the band.