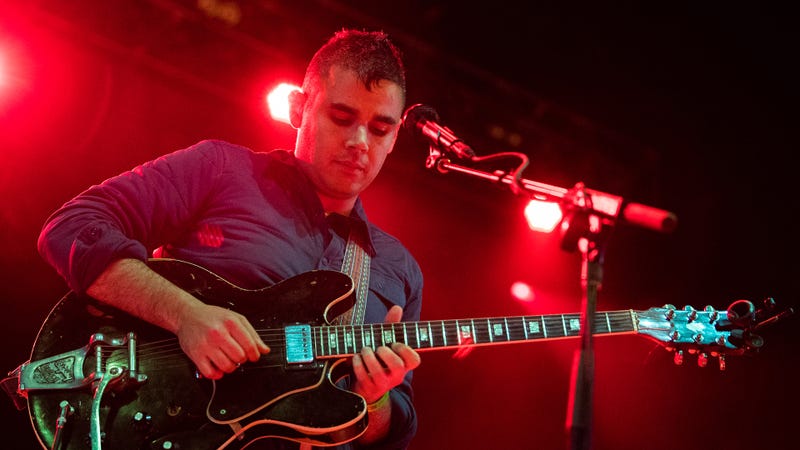 Singer, songwriter, producer, and founding member of Vampire Weekend, Rostam Batmanglij joined RADIO.COM's New Arrivals show with Bryce Segall recently to discuss his solo work, including his upcoming sophomore release Changephobia on June 4 which has already been teased with the singles "These Kids We Knew,” and "4Runner."

Prior to Rostam's Changepghobia, Bryce had become appropriately familiar with his first solo offering, 2017's Half-Light, while drifting in and out of a nap, finding himself pleasantly surprised with the soundscapes it provided. Rostam admits he's had plenty of similar experiences with albums finding their way under his skin while drifting off.

"They say the brain is most creative as you're approaching the dream-state, or just coming out of the dream-state. People say you should have a little notepad and write down your ideas, because you're going to have your best ideas as you're falling asleep or as you're waking up" says Rostam. "I think it makes sense that we would be receptive to albums that we experience as we're kind of like dozing in and out of consciousness. I will say I don't judge anyone who can't get into an album, because it's very hard for me to get into albums. I feel like it always takes me at least a year before I decide I actually like an album. Sounds pretty harsh," he admits, "but it's gotta get under my skin over time before I decide how much I really love it."

"My game is making music," says Rostam. "It's not being a music critic. It's funny, on the internet, it's so easy to want to throw your opinions out there and be like, 'this sucks!' And then you may have the opposite opinion a year later. So I don't have to live or die by my snap-judgments. I can hang out."

This is Rostam's second, second album -- after his first solo release and working with Vampire Weekend on their 2008 groundbreaking self-titled record and the 2010 follow-up release, Contra. "Making 'Contra,' I remember pretty vividly," he says, "because it was the fastest that I'd ever made an album. Both me and Ezra had a lot of ideas going in that made their way into the album... I remember it was January 2009, where we started having these sessions specifically for 'Contra.' There was some version of the album done by July. It was like, seven-eight months. So, that was a crazy, second album-making experience."

"I tried not to think of this as a second album," says Rostam. "I almost thought of this forthcoming album 'Changephobia' as a second phase of my career. Because I kind of wanted to get away from some of the stuff that people knew me for, and I kind of wanted to see how far I could push the boat out and go to a completely new territory."

Fans will be happy to know that Rostam has continued his love of the baritone sax on the new release, a sound he says he was drawn to because it's a "space that people have not occupied," and stems from his love of '50s and '60s Bebop Jazz. "To me, there's like those resonant frequencies with Bebop, A Tribe Called Quest and Q-Tip... it feels like an interesting time to explore that sound and that vibe."

While it's taken him some time to accept that his style of music is considered to reside in the "Alternative" genre, Rostam regards the term in a positive light, and remembered his very first experience at a Washington D.C. area festival thrown by RADIO.COM affiliate HFS 104.9 "back in the day." He says, "I remember crowd-surfing to Third Eye Blind and I think Rage [Against the Machine] took the stage later in the day."

His exit from Vampire Weekend to pursue solo ventures and produce other artists was always something Rostam saw as part of his "life path." Seeing the band he helped get off the ground and into the mainstream was simply one part of the journey. Ezra, he says, "we were friends and we talked a lot about things that we wanted to do, and we had so much in common it made sense that it made sense to do stuff together, but it's funny, he kind of knew me better than myself. He knew that my life would involve making records with lots of people and being in a band would not allow those two things to really be possible."

"We all felt like the timing made sense. There were so many things that coincided with me leaving Vampire Weekend in the capacity of being a member. I turned 30; I lived in New York for 12 years, I moved from New York to L.A. There were all these things that kind of made it seem like, 'oh this is a good time to make this change,'" he says.

Obviously, there's no bad blood between any members, but Rostam still has yet to catch a Vampire Weekend show as a spectator. "I think it would be fun to," he says. "Some scheduling stuff kind of prevented that. I think I was in S.F. during the Hollywood Bowl show... I think it would be fun to see it live. Some of those songs I feel like I've heard in different ways, other songs I probably haven't listened to in maybe like a decade. It would be kind of cool to hear them again."

Listen to the full interview with Rostam Batmanglij above, and keep an eye out for Changephobia, hitting shelves and streaming June 4.

RADIO.COM's New Arrivals with Bryce Segall is your destination for what's next in the Alternative landscape. Pairing new music from the artists who define today's sound against tomorrow's voices, on a given night listeners can expect not only first plays and premieres from future favorites, but also exclusive interviews with the most prestigious of the genre's talents. Early guests include Kevin Parker of Tame Impala, Damon Albarn, 100 Gecs, Fleet Foxes, Romy of The xx, James Blake, and more.