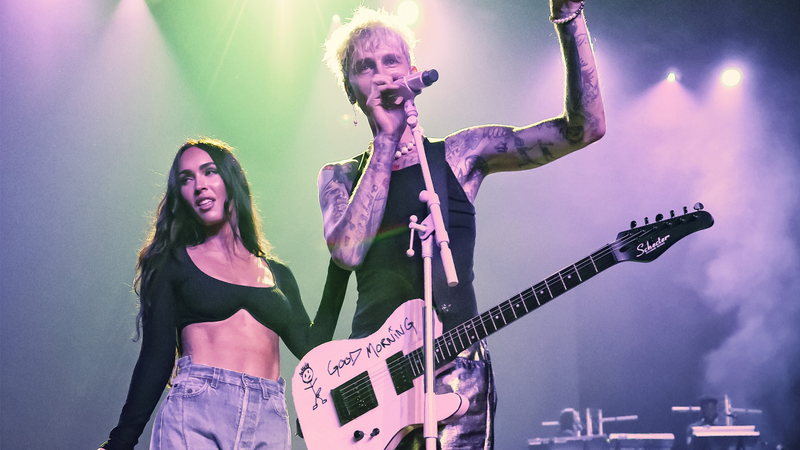 It’s no secret Megan Fox and Machine Gun Kelly have undeniable chemistry. And now it’s time to see how it all began, in the new red-band trailer for Midnight in the Switchgrass.

While off-screen it’s all PDA and piggy back rides for the real-life couple, who met while filming the thriller back in March 2020, in the tense new trailer Megan and MGK, who’s government name is Colson Baker, are definitely not on the same team. Well that’s what we’re going with since she punches him in the face.

Directed by Randall Emmett, Midnight in the Switchgrass follows two FBI agents, played by Fox and Bruce Willis, who team up with a Florida state cop, portrayed by Emile Hirsch, to catch a serial killer who abducts young girls from truck stops.

In the intense scene between Megan and her mans, Fox's character is seen going undercover to seduce Colson’s character. “You belong to me. Do you understand what I'm saying? Now lift up that skirt," he says before grabbing the actress, knife in hand. To which Fox's character replies "No" and proceeds to take a swing at her IRL boyfriend. The two reunite later in the trailer when Fox holds a handgun to Baker's head while demanding some information. Told ya, it's intense.

The directorial debut from Emmett, known for his engagement to Vanderpump Rules' Lauren "Lala Kent" Burningham and as the producer of films such as The Irishman, Speed Kills, Gotti and Everest, is slated to hit theaters and on demand on July 23.

So are we surprised things turned romantic on set for Megan and Colson, considering their intense onscreen roles? Not so much. And are we gonna re-watch that part of the trailer like a million times? Ummm yes. Look, we’d watch the whole thing over and over, but it’s kind of creepy scary and nightmares aren’t our thing. No seriously, whatever we don't care what you think, watch it above, you’ll see.