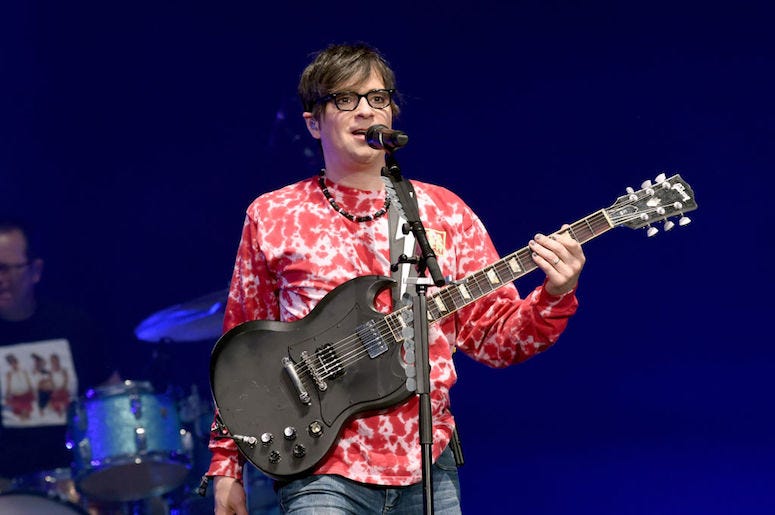 Weezer has been full of surprises lately and continued the streak with the release of their new song “All My Favorite Songs.”

Fresh off the surprising announcement of their new album OK Human, Weezer has dropped the first single off the record and its accompanying music video. The video opens up with frontman Rivers Cuomo staring at his phone in the studio while his bandmates wait impatiently for him to be ready to record.

The video then flashes back to a teenage Cuomo scrolling through his desktop computer before getting transported to the real world where he plays basketball, meets a love interest, and takes in a recording session with his future band, Weezer.

“During the summer of COVID-19 we grabbed our masks, hit the studio & began to chip away at what is now known as OK Human,” the band wrote in the description of the video. “An album that was made by a handful of humans using only analog technologies (including a 38 piece orchestra) for all of you humans to consume.”

“OK Human was made at a time when humans-playing-instruments was a thing of the past. All we could do is look back on ancient times when humans really mattered and when the dark tech-takeover fantasy didn’t exist. We used our instruments to connect to the 1960’s and 1970’s and, with the orchestra, back to the 18th and 19th centuries. We had no click track or loops or hi-tech sounds. Not even an electric guitar.”

Hold on to your hard drives 💾 OK Human, the new album, arrives 1/29

"All My Favorite Songs” the first song from the album will be out this Thursday, 1/21 at 12am ET.

Limited vinyl will be available for pre-order on https://t.co/7LaRP9HTTb then too pic.twitter.com/V7eCr5FUi3

OK Human is set to arrive on January 29 and will feature twelve brand new tracks. The announcement caught Weezer fans by surprise as they had been eagerly anticipating the group’s long-awaited album Van Weezer.

Van Weezer has seen its own set of delays due to the pandemic, but will finally see a release on May 7. All in all, 2021 is shaping up to be a pretty good year for Weezer fans.