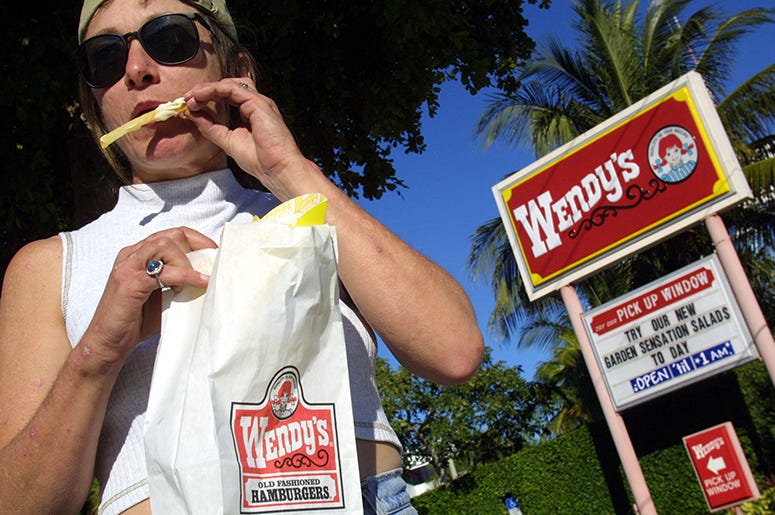 It looks like the social media manager over at Wendy's corporate has a serious affinity for pop punk.

It all started with a series of Twitter posts that began with a fun little trolling operation between the burger chain's account manager and the Dunkin' account. Dunkin' first posted a photo of a person in a donut costume holding up a placard in front of a Wendy's sign saying, "Listen to the life-sized donut: You don't have to settle for spicy nuggets," to promote their new spicy donut.

Wendy's responded with fire saying, "Stick to pushing the food that’s so 'good' you took it out of your name. My grandma has more heat in her roasts." Shots fired!

Stick to pushing the food that’s so “good”you took it out of your name.

My grandma has more heat in her roasts. https://t.co/4dyDghYTTz

See Also: Our Favorite Fast Food Trends That Sent America Into A Frenzy

This prompted followers to chime in en masse about the pure savagery of the Wendy's account manager, with one user saying "Top 5 Things Eminem's afraid to diss" -- which drew another response from Wendy's. "Please don’t make him do it, my pop punk album to recover after his diss isn’t ready," Wendy’s responded referencing Machine Gun Kelly's new pop-punk album, Tickets To My Downfall, and the reviews which claim he “switched genres” after a long-running Eminem feud.

please don't make him do it, my pop punk album to recover after his diss isn't ready.

Things then went beautifully off-the-rails with comments flooding in about the pop punk bands currently endorsed by Wendy's (like iDKHOW, All Time Low, Wonder Years, Nothing, Nowhere, and tons more!), or at least their social media person, who dropped band name after band name in response. See a sampling below.

honestly the new MGK is full of bangers. #1 album being a pop punk album is gonna do great things for the scene. Meet Me @ The Altar, Stand Atlantic, Hot Mulligan, Grayscale, Knuckle Puck, Nothing Nowhere, If I Die First is a great throwback sound. Tons more.

love that idkhow is a super group. was a big fan of the brobecks. love that they're climbing up the alt charts, hopefully some more momentum for tangentially scene bands

really enjoyed Lilac from The Early November. Ready for the new wonder years on Friday

no way, super cool that Monsters is #1 on alt.

Some of the bands tagged in the Tweets were also quick to jump in on the love-fest, with some asking for sponsorships, and others professing their adoration.

Damn thanks @Wendys I can’t tell you how many 4 for 4’s have helped us survive on tour lol pic.twitter.com/Nts2zXNg86

In all quite a productive project, excellently executed by the person behind Wendy's tweets. Honestly, someone better get a raise.