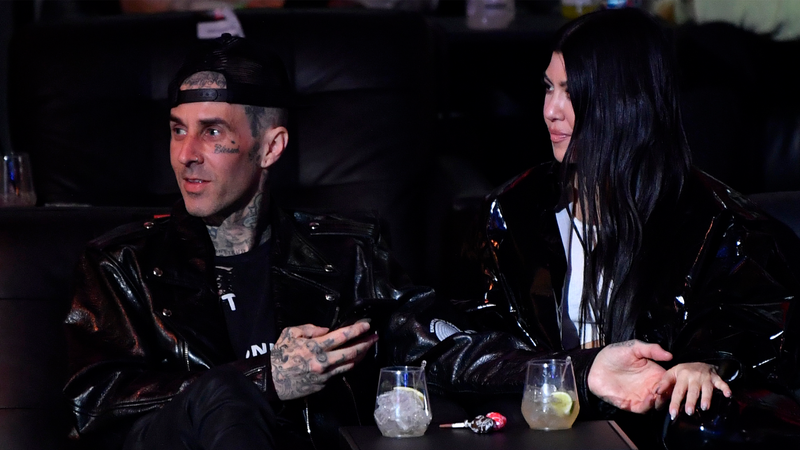 The love bug sure has bitten these two. Speaking of biting, in a recent Instagram post, Travis Barker posted a series of shirtless photos of himself cuddling with Louis, his black French bulldog, alongside the caption, “Dogs never bite me. Just humans.”

Hmmm, wonder what humans he’s referring to, or rather one human in particular? Lol that was both sarcastic and rhetorical because it took about 2.3 seconds for us and a plethora of fans picked up what Trav was apparently putting down, clearly alluding to his girlfriend Kourtney Kardashian.

“Just @kourtneykardash,” one fan commented, adding in some flame and heart eye emojis. Even Kardashian took a bite, eventually responded to Barker’s post with the vampire emoji, to which in true modern love story fashion, Travis quickly fired back with the red blood droplet emoji.

The suggestive IG flirting is just the newest development of public displays of mutual affection “Tratney” (that’s the couple name we just made up for them) has been blessing us with since making their relationship official in February.

Despite having a reality show, the usually private Kardashian has been rather transparent about her and Barker’s relationship, which might be all thanks to Travis. After weeks of cute coupley posts, Travis turned things up for Kourt’s birthday sharing a NSFW video of Kardashian sucking his thumb, that now will go down in history, and we will straight up fight anyone who says otherwise.

Like we said, Kourt’s been extra into sharing these days, showing off a rather cheeky snap Travis took showing off his braiding skills on Kourtney. As for Travis, he’s not limiting his love to just social media, deciding to make things permanent the Travis Barker way, by getting “Kourtney” tattooed on his chest.

So what do you think, should we be expecting a biting video to make its way to IG next? Honestly, who cares, we’ll take whatever. Clearly this love tour isn’t ending any time soon and this couple is here to stay. So we’ll just be here, patiently waiting for whatever suggestive tweet or NSFW video post comes next, you’re more than welcome to hang.