Just hours before the 2020 GRAMMY Awards, the world was dealt some devastating news. Kobe Bryant was killed in a helicopter crash on Sunday, along with his 13-year-old daughter and 7 others. As plans were underway for music’s biggest night at the Staples Center in Los Angeles, fans gathered outside to celebrate the life of the iconic athlete.

The tributes stretched into the show, with artists throughout the evening sending love to Bryant’s family and holding up his jersey during performances. Host Alicia Keys honored him along with Boyz II Men, singing “It’s So Hard To Say Goodbye To Yesterday.” The legacy of Bryant was felt throughout the arena, and on the red carpet outside. 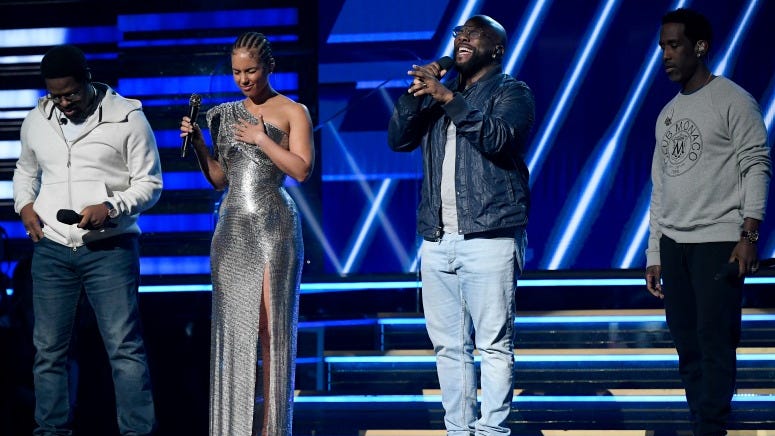 “This was a great American and a great global citizen,” Iggy Pop told RADIO.COM on his way into the event. “And this was his house.”

“He’s like a national treasure,” added Oli Sykes of Bring Me The Horizon.

“We lost Kobe Bryant today,” GRAMMY-nominated rapper YBN Cordae shared with RADIO.COM. “He’s a black superhero and a true definition of a role model. Rest in peace to his daughter. It’s just tragic.”

Artists across all genres, from Rock to Hip Hop to Jazz and beyond were obviously moved by the passing of Bryant, an athlete who became an all-star on and off the court, and a force within the community.

“It’s heartbreaking,” reflected the members of GRAMMY-nominated band I Prevail. “Being in the home of where he created so many memories and created his legacy. I’m hoping to see some artists come up there tonight and honor his legacy. Not only was he a huge impact just in sports. He was a global icon and did so many things for so many people.”

“When people pass, I think the most brilliant thing is remembering their spirit,” the members of GRAMMY-nominated band Bones UK shared. “Though it’s really sad, I think he’d probably want us to celebrate the things he loved.”

“Though it’s incredibly sad lets for him, celebrate his life rather than just mourn his death.”

With chants of MVP echoing outside the Staples Center, the life of Kobe was celebrated on Sunday both around and inside the arena. As Alicia Keys called it, “the house that Kobe Bryant built.”