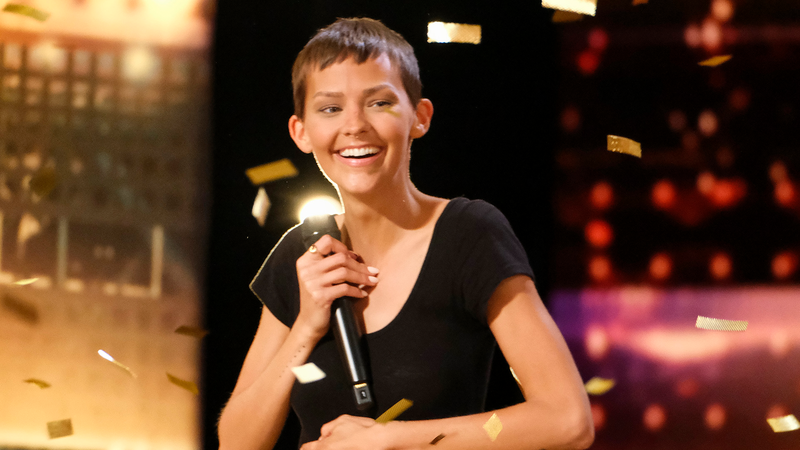 While her voice earned her the illustrious ring of the Golden Buzzer from Simon Cowell no less, it’s Jane Marczewski’s cancer story that has left viewers and the judges most inspired, but obviously her incredible voice doesn’t hurt.

Before leaving the judges in tears with her original ballad “It’s OK,” three-time cancer survivor Jane, aka Nightbirde, briefly detailed her current cancer status revealing she had “some cancer in my lungs and spine and my liver," which left the judges at a loss for words.

Judge Howie Mandel was the first to address the 30-year-old singer, saying, “so… you’re not OK?” To which she calmly answered, “well, not in every way, no,” and that despite the fact that doctors had now given her only a 2 percent chance of survival, “it’s important for people to know I’m so much more than the bad things that happen to me.”

Nightbirde’s AGT performance and raw yet eloquent way with words were beautifully complemented by her etherial and airy voice, that when she finished and shyly backed away from the microphone, there was a long, astounded pause before a choked-up Simon simply said “wow,” which was right about when the entire theater broke out in a standing ovation.

No secret here that this story ends happily as the golden buzzer means Nightbirde is headed  straight to this season’s live shows.

“Your voice is stunning, absolutely stunning,” said Simon. “There was something about that song, the way you almost casually told us what you are going through…” Cowell then did one of his Simon fake-outs, by saying, “I’m not going to give you a yes,  I’m going to give you something else!” And with that, he hit the Golden Buzzer. As the overjoyed and overwhelmed Nightbirde dropped to her knees crying, happy tears of course, Simon joined her onstage for celebratory hug.

While the folk-pop vocalist didn’t share any more details of her cancer battle during her time on AGT, she goes into more detail about the harrowing experience in a blog post on her website.