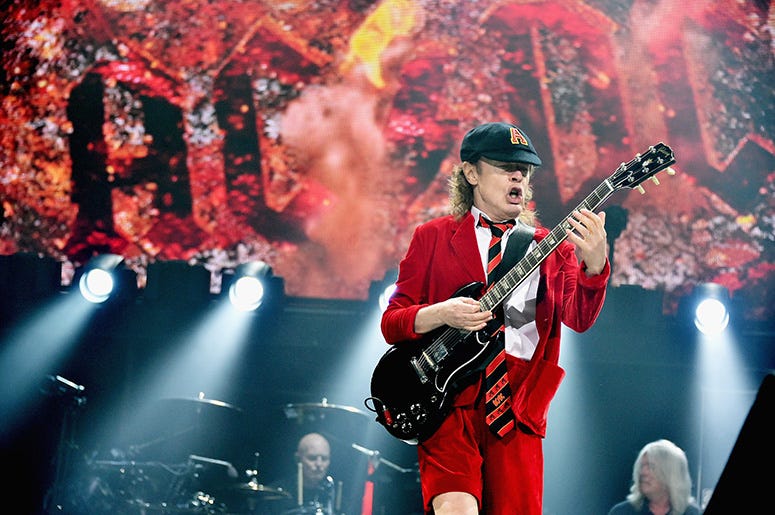 AC/DC continue rigorously promoting their November 13 album release of PWR UP with a new satanic-themed trailer fit for fans who love the band’s evil undertones.

The “Demon Fire” trailer begins with a Chrysler Imperial Crown rumbling down a desolate infrared highway, ruby lights illuminating the expanse ahead. As lit up billboards read “FEEL THE PWR,” a second car approaches on the left harboring a driver with glowing red eyes.

As the former car continues barreling down the road, flashes of red reveal the driver with glowing eyes waiting on the road to deliver uncertain fates.

Clip music is from the track “Demon Fire.” It’s the second single featured on the group’s 17th studio album. It’s their first project since 2014’s Rock or Bust, and welcomes back Brian Johnson who left AC/DC in 2016 because of hearing loss. The lead singer seemed excited to spark old musical flames during an interview with NME last month. “There were AC/DC tracks we’d never got the chance to work on and it was just great that everyone wanted to be a part of it,” he said.

“We’ve managed to get back what the world has known as AC/DC since 1980 when Bon Scott passed away.”

Another single that’s been heavily promoted is “Shot In The Dark.” The band released a high powered music video to get fans pumped for their comeback. High resolution footage captures band members in the throes of rock nirvana, beating their respective instruments to a sonically heroic pulp. Brian, Angus, Stevie, Cliff and Phil perform atop a simple and enlarged stage with laces of red light, glowing band logo hanging in the background.

The Rock Gods also shared their official Power Up name generator, complete with "Pwr Up" button and sound effects. PWR UP is available for stream and sale November 13.