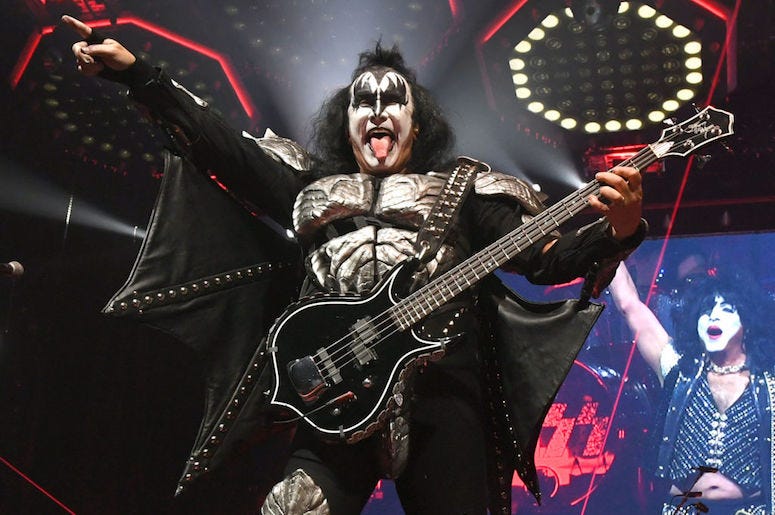 Early on in their career, even before they released their first album, Van Halen had a brief period where they were employees of Gene Simmons.

The KISS frontman recalled his experience with a young Van Halen during an interview with Yahoo Entertainment. “I was invited in the ‘70s... to go to a place called the Starwood,” Simmons said. “My date that night was a young lady named Bebe Buell, who would then go on to have a child with [Aerosmith’s] Steven [Tyler], Liv Tyler. And I was busy upstairs in the ‘a*****e section,’ the whole ‘who do you think you are?’ thing, looking down on everybody else.”

Simmons said he was blown away by the show, especially Eddie Van Halen’s masterful guitar work. “I just was so astonished,” Simmons said. “I was waiting backstage by the third song.”

After the show, Simmons caught up with Van Halen and was pressing them about their future plans. When Simmons asked Van Halen about their business dealings, the band replied “oh, we got a guy outside. He's a yogurt manufacturer, and he's going to invest in the band.”

Simmons said he “begged them” before telling the band “please don't do that, please don't do that. Don't give away any percentages of the band at the outset. That might be the only profit margins you'll ever see — which is to say, you'll take a dollar now, and like anything, later on in life you're not going to see a profit and somebody else is going to have a say in what you can do.”

Simmons then made the offer to fly the band to New York and produce a demo for them. He signed the band to his company, Man of 1,000 Faces, and ended up recording 15 songs at the famous Electric Lady studios.

Early versions of Van Halen classics “Runnin’ With the Devil” and “On Fire” were recorded during this period and Simmons was left with heightened excitement about their future.

Following the sessions, Simmons went to KISS’ manager Bill Aucoin and pleaded with him to sign Van Halen to his management company. Surprisingly, Simmons was the only one in the KISS camp to have any type of enthusiasm for Van Halen.

“Aucoin, Paul Stanley, none of the guys from the band, Ace — they didn't hear it,” Simmons said. “They would just go, ‘So what?’ I’m like, ‘No, you don't get it. I'm telling you, listen to Uncle Gene, I know what I'm doing. We're going to take them out, have them open for us. They're going to be a mega-band, and we'll be there also with them!’”

While he was disappointed those in KISS didn’t share his vision, he still had Van Halen under contract and was left with a decision. “I had a choice of, because they were assigned to me, keeping them locked up with my thing, or doing the ethical thing, which is: ‘Guys, you don't owe me anything. I'm tearing up your contract. You're free to go,’” Simmons said.

He ended up releasing Van Halen from their contract and gave the demo masters to Eddie and Alex Van Halen. “And of course, within two months, they got a deal with Warner Bros. and skyrocketed,” Simmons said.

Simmons could easily lay claim to “discovering” Van Halen, but he has no interest in doing so go so far as calling it a “false idea.”

“The people who literally discovered the Van Halen brothers were their mom and dad,” Simmons said. “After that, the two brothers made themselves. Nobody handed them anything. They worked hard for it. They put the years in, paying their dues.”