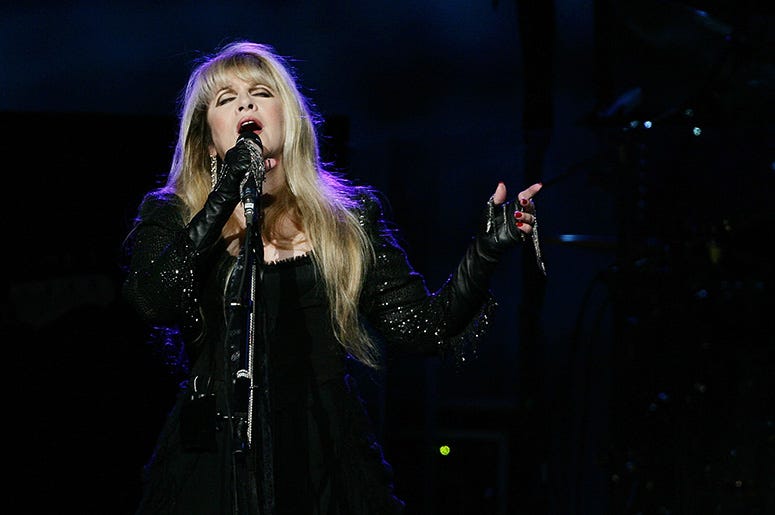 Stevie Nicks channels spirits of Classic Rock legends like Prince and Tom Petty to provide an ethereally support while performing on stage.

That’s what the Fleetwood Mac superstar told Variety magazine during an expansive interview to promote her concert film Stevie Nicks 24 Karat Gold the Concert, and upcoming soundtrack. “And if I have a really big, important show, I call in all my spirits, and I say, “Tom, stand behind me. Prince, stand with me,” Stevie tells the magazine.

Nicks reveals meeting The Purple One and telling him her song “Stand Back” was modeled after music from “Little Red Corvette.” His influence became a hopeful spectre she would call on in difficult times.

“The Prince thing started a long time ago, because sometimes even before Prince died, I would say that. I wish Prince was here and he could just walk with me out there; because of his performing ability and how good he was on stage, sometimes I’d just go, ‘Come with me.’”

She went on to differ her relationships between the two legends, describing Tom Petty as “my buddy friend,” and someone she would talk on the phone with “sometimes for a couple hours.” The Pair earned song writing credits for songs like “Starshine” and “Stop Draggin’ My Heart Around.” Petty’s 2018 death signified a personal and career tragedy for Stevie.

“I spent a lot of time at Tom’s different houses, and a lot of time with his family when he was still married to Jane. And that was a very hard loss for me.”

Stevie Nicks on Her New Concert Film, the ‘Crazy’ Resurgence of ‘Dreams’ and Staying in Touch With the Spirits of Prince and Tom Petty https://t.co/wL8bfZWH2k

Other topics covered during the interview included historical precedence for events in 2020, songwriting with Fleetwood Mac and her thoughts on the viral social media challenge based on the group’s single “Dreams.”

“I’m thrilled that people still love it, and that it does still make people happy. And who knows even why? But it does. But 'Dreams' came out how many years ago? Like in 1975, right?”