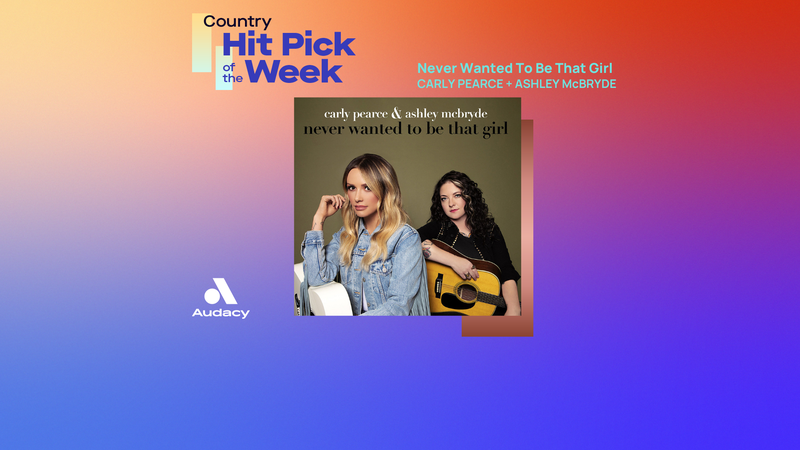 Our Audacy Country "Hit Pick of the Week" is Carly Pearce and Ashley McBryde’s “Never Wanted To Be That Girl.”

Two of Country music's most powerful female voices have come together for a one-of-a-kind collaboration and it has surpassed all our expectations. While the pairing of Pearce's refined vocals with McBryde's edgy grit isn’t something we necessarily saw coming, it took all of one listen to convince us it's pure perfection.

The high-drama song, included on Pearce’s most-recent album, 29: Written in Stone, narrates a sobering moment for two women who know their worth and find themselves in the presence of the same unfaithful man — We told you it was high-drama!

“Nobody ever thinks it will happen to them,” said Pearce of the song’s concept. “You never see it coming, but there’s always an explanation. You know, who’d ever want to think that way about someone they love. Why would you? And so, that’s where this song started: the things you don’t see, because you’d never look.”

Not only does the song highlight the high-level vocal talent of borth Pearce and McBryde, but it’s also a showcase of their top-tier songwriting as they both penned the song alongside co-prodcuer Shane McAnally.

“Ashley is such a great drop-into-the-moment writer, she was able to bring that reality bomb truth to what we were doing,” Pearce stated. “She’s fearless, and she understands human nature in a way that let us both really write to the hurt of realizing we’ve been lied to by someone we’re intimate with.”

Added McBryde, “Carly isn’t afraid to face the less potable subjects. As a writer she’s willing to get in there and get very honest. Writing this song together with Shane strengthened our friendship and taught us more about one another and ourselves. Seriously, nobody wants to be the other woman. And when you find you are … damn. It’s such a gut punch.”

Listen for the duo's brand new song, “Never Wanted To Be That Girl,” taken from Carly's new album 29: Written in Stone, all week on your favorite Audacy Country Stations.