A decade after his debut, already with six albums reaching diamond status and years of sold out arena shows in the rearview, Garth Brooks took a left turn. The highest-selling solo artist of all time put his hat on the shelf, leaned into leather, added some swooping bangs and became, Chris Gaines.

The alter ego of the music icon was first created for a film, The Lamb, which never came to be. Discouraged by initial reactions to the character, the project failed to launch. However, what remains is the amazing, committed and sometimes confusing, short but spectacular career of Chris Gaines.

Now for the 20th anniversary of Chris Gaines’ only album, Greatest Hits, some of Country’s biggest stars have gathered to remember the legacy of this fictional rock star in the exclusive RADIO.COM video above.

“That is the most random recognition of an anniversary,” Keith Urban says and smiles at our 20th celebration. “I saw him floating around, cleverly disguised as Garth Brooks. Sneaky”

“Oh I’m very familiar with Chris. Big fan,” Luke Combs adds with enthusiasm. “My favorite thing about Chris Gaines is the hair. The swoopy, like the Panic! At The Disco look, ya know?”

"Brooks in the streets and Gaines in the sheets," jokes Mark Wystrach of Midland. "I heard a rumor he's going back on tour," Luke Bryan inserts slyly.

Greatest Hits was released on September 28, 1999. Along with it came a VH1 Behind The Music, and a performance on Saturday Night Live, which was hosted by Garth Brooks. While some snickered at the project, it was ultimately a success. Greatest Hits has since been certified 2X platinum in the US, and produced Garth’s only Top 10 hit on Billboard’s Hot 100. For some it’s an odd, brief chapter from a legendary performer, but for a lot of others it was a collection of solid songs drowned in the volume of public perception.

“Chris Gaines’ album is one of the best albums Nashville’s ever made, it really is,” Dierks Bentley says. “Garth making that album, it was confusing for a lot of people. I think there was a movie that was supposed to go along with it, but if you really sit down and listen to the album, which I have being a Garth fan, it’s a great album.”

“I loved it, I really did,” Lee Brice confesses, after showing us a sample, singing “It Don’t Matter to the Sun.”

“The whole look thing was weirding me out, but I liked the songs,” he adds.

The digital footprint of Greatest Hits is essentially gone, or never really created in the pre-iTunes era, but for true fans Chris Gaines still echoes through time. Earlier this year, GRAMMY winner Childish Gamibino covered “Lost In You,” introducing the song to a new audience. This weekend a group of fans in Nashville will hold their own Gainesfest to celebrate the landmark event. From artists to the audience, the career of Chris Gaines is not forgotten.

“I bought that album, and it just goes to show you how talented Garth Brooks is,” explains Chris Lucas of LOCASH. “A lot of people down that album but, he is so talented. I mean, the guy could sing anything.”

Watch the full video above, to see more Country stars talk about the career and impact of Chris Gaines, including Garth Brooks himself, who didn’t appear aware of the anniversary.

“No I did not know that, that would make him 53 then,” Brooks smiles and looks off. “No, I do not think that he’ll be going on tour again.” 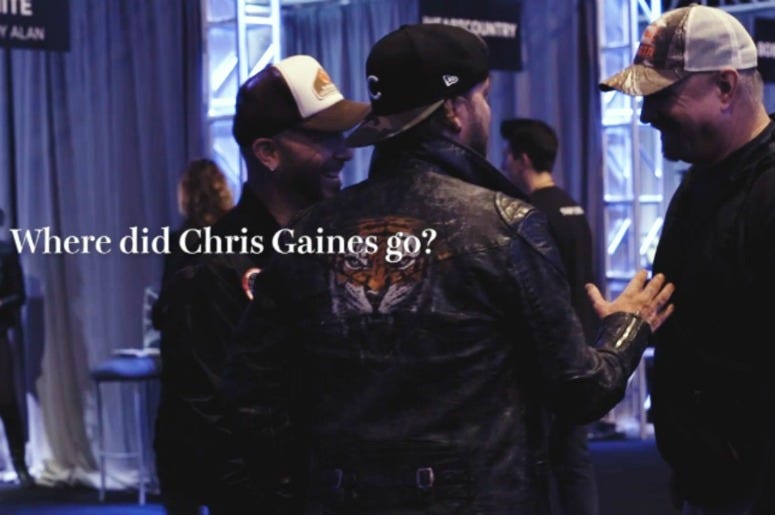