Although sashes and crowns are not actually given during the Country Music Association awards, RADIO.COM's Kelly Ford certainly made reigning Vocal Duo of the Year for 2019 Dan Smyers and Shay Mooney feel like they had theirs on during a quick check in ahead of this year's ceremonies.

This year's 54th annual CMA Awards will air live on ABC on November 11, broadcast from Music City Center in Nashville, TN featuring tons of tributes and performances from the genre's biggest stars.

Dan + Shay are nominated once again for the Vocal Duo category, as well as the Musical Event, Music Video, and Single of the Year categories for their hit "10,000 Hours" with Justin Bieber, and will be performing the song live with Justin on stage during the show. 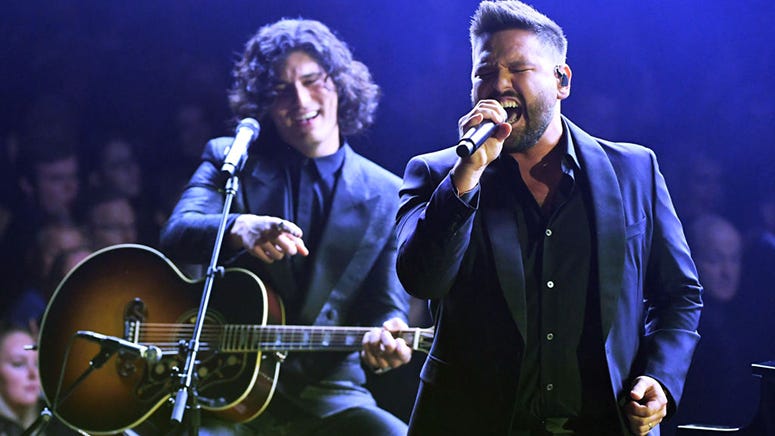 "I am a little bit nervous, in a good way" says Shay about performing with Justin. "I'm more excited, I would say. We haven't really gotten to have that moment of celebration with '10,000 Hours' -- we just had like the year anniversary of the song. So, it's kind of crazy that we haven't got to. Obviously with everything that's happened, we're excited to get back with him and hang, and be able to perform it."

For Dan, he's excited to be a part of something that so many people are anticipating. "I feel like so many people outside of the Country world just want to be a part of it, and when they get an experience, they're like 'this is so amazing.' It's so welcoming; it's just such a family. Everybody gets along and I think other genres kind of look in and are like 'we kind of want that.' I think that's why a lot of Pop artists gravitate toward collaborating with Country artists. It's uncharted territory for them and it's really cool."

"Hopefully we can bring home a trophy or two. I think it would be his first Country award," Dan continued. "If we could be a part of that it would be cool to have one with our names on the shelf."

While any award would be welcomed by the pair out of the, count 'em, four nominations they have this year, there must be one that stands out to them as top billing.

If he had to choose, "having one with Biebs would be pretty cool... having that moment and always having that memory. We already have the song that we got to have a big moment with him, and that was such an honor. [We're] very thankful, it completely changed our careers. It would be awesome to put a bow at the end of that one."

Dan pulled no punches... "Single of the Year," he said with a smile. "That's the big award. We've been nominated for it a few times and always lose, so hopefully one of these times things change."

Heading into the holidays, we have a new song from the pair to make the season bright. Just last week Dan + Shay dropped their original Christmas song “Take Me Home For Christmas” which is available everywhere now.

"Writing Christmas songs is pretty hard," Dan admits. "You think you've got a good idea and 'oh that one's already taken.' There's only so many things you can say, you know? I feel like we did it, we tapped into one and the fan response has been incredible so far. Hopefully it gets big this year, and is big every year."

Watch for Dan + Shay + Justin at this year's CMAs airing live on Wednesday, November 11 @ 8PM ET on ABC -- and stay tuned to RADIO.COM for even more exclusive conversations with your favorite stars.