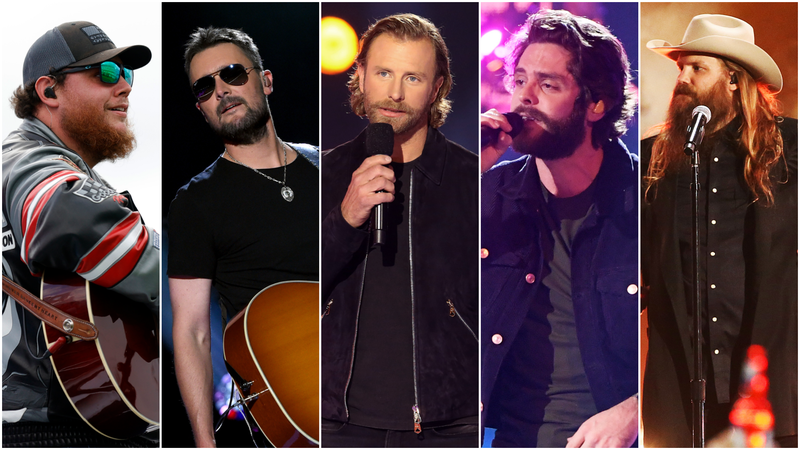 We are eager to celebrate a night full of great music, big stars and major awards at the 56th annual ACM Awards on Sunday night. Taking place across various Nashville music venues the show is sure to be jam-packed with exciting moments.

WATCH MORE: And the nominees are...

One of those exciting moments will be the unveiling of the 2021 ACM Male Artist of the Year, a title previously awarded to several outstanding men in the genre including Brad Paisley, Blake Shelton, Kenny Chesney, Tim McGraw, George Strait and most recently Luke Combs. While winners are voted on by ACM professional membership, we want to know what you think! Take a look at the nominees below, and let us know who your leading lady is.

An artist with one of the most loyal fan-followings in the genre, Luke Combs is a force to be reckoned with. His music speaks to fans of all types and he seems to bring the party wherever he goes. You won’t find a Country fan anywhere who doesn’t recognize his powerful vocals and get ready to sing along when they hear the opening chords to one of his many hits.

He may see himself as just a regular guy, but Dierks is looked up to by many throughout the genre. Known as the mountain man of Country music, Bentley finds a lot of inspiration for his music in the great outdoors. He’s also been known to show his support for 90s Country by mentoring the Hot Country Knights (we hear Dierks knows the lead singer, Doug Douglason quite well).

Never afraid to break the rules or push boundaries for the sake of creativity, Eric Church shows true leadership through his music. He gains a lot of attention for tackling some of the world’s most taboo topics with his well-crafted lyrics, and the genre is better because of him.

Thomas Rhett continues to release hit after hit. With every release he gives fans a taste of something new creatively, and they absolutely love him for it. While you never quite know what he’ll come up with next, on thing is for sure, it’s in the fast lane to undeniable success.

With a voice unlike any other and songwriting skills that have been proven immaculate time and time again, there’s no doubt any project Chris has been a part of will go down in history. He has an innate ability to capture the ears of both Country and non-country fans which makes him a popular pick for any playlist.