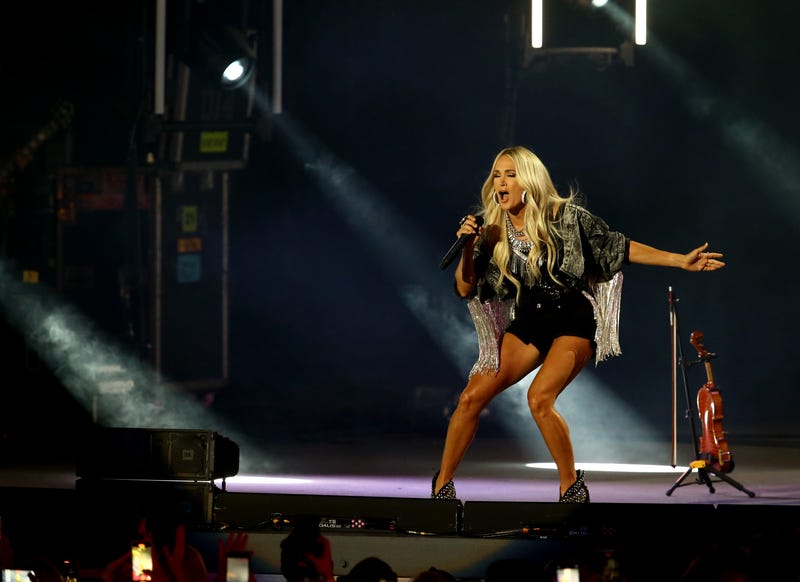 CMA Summer Jam brought the heat as it aired for the first time on ABC Thursday night. Filled will appearances from all our favorite Country stars, unique duets and the best of Summer fashion, the show was the perfect welcome back to live music for many.

Missed it? We got you covered. Check out a recap from the show’s hottest moments below!

Blake Shelton opened the show with a high energy performance of, “Minimum Wage.” Clearly excited to be on the CMA stage again, Blake had a huge smile on his face that only grew bigger when his wife, Gwen Stefani, joined him for their duet, “Happy Anywhere.” The newlyweds were glowing as Blake sported his shiny, new wedding ring and introduced his wife as, “Gwen Stefani Shelton,” while Gwen rocked all white with an off the shoulder top, mini skirt and high-heeled cowgirl boots.

Carrie Underwood had a night to remember as she shared the stage with Country legend, Dwight Yoakam. Underwood threw on a blinged-out cowgirl hat for the occasion while Dwight rocked his own bling with a rhinestoned denim jacket and guitar strap. The two danced around the stage together as they sang Yoakm’s “A Thousand Miles From Nowhere,” and “Guitars, Cadillacs.” Dwight playfully credited Carrie saying, “Best backup singer I’ve ever had, I believe.” Carrie was seeing stars as she said, “Dreams do come true!”

Miranda Lambert wasn’t messing around. The 37-year-old showed up ready to party in neon orange fringe, high-waisted denim skirt and rhinestone fishnets with the only thing brighter than her outfit being her talent! Lambert rocked the stage with fan favorites old and new like, “Kerosene,” “Settling Down,” and “Tequila Does.”

Lainey Wilson was living her dream, quite literally, as she took the CMA stage for the first time. Wilson was happy as can be as she took the stage in all her “bellbottom country” glory with giant peace signs on her pants and stars on her bum. Aside from the stellar vocal performance of her single, “Things A Man Oughta Know,” it was so fun seeing Lainey soak up the memory as she danced around the stage, like we’re sure she used to do as a little girl in her bedroom, dreaming of being on a big stage one day. Congrats, Lainey! You’ve made it.