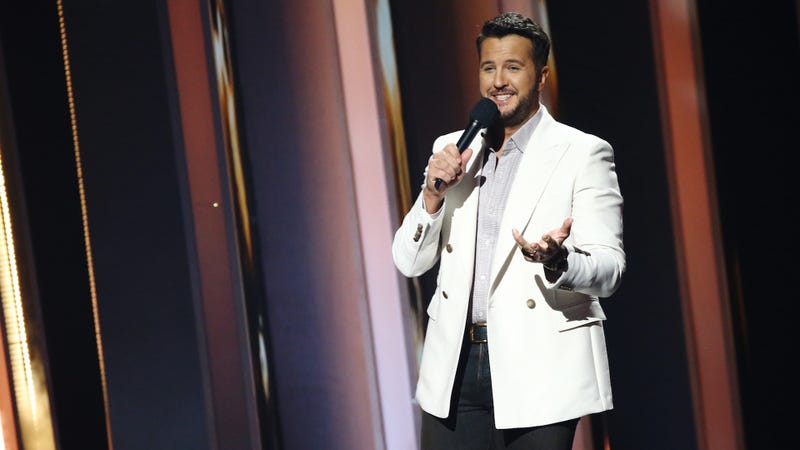 The 2021 CMA Awards did not disappoint!

Broadcasting live from Nashville’s Bridgestone Arena it was a night full of big wins, good music and lots of laughs as Luke Bryan dazzled the crowd taking the stage as the first solo host for the event in 18 years.

Missed the show? We got you! Take a look below for some of the most notable moments from Country music’s biggest night. From the most mesmerizing collabs to the moment the 2021 CMA Entertainer of the Year was crowned, we’ve got you covered! 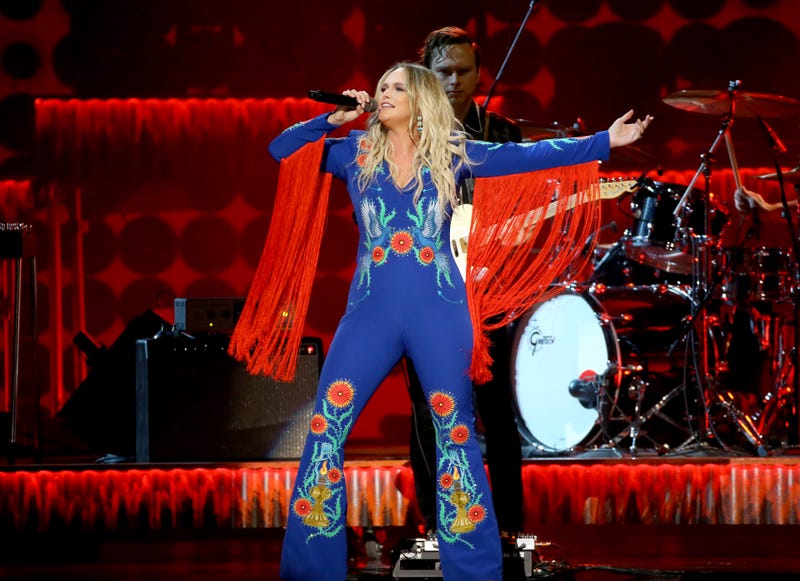 Miranda Lambert, who also happened to be celebrating her 38th birthday, kicked off the show with with fire, energy and epic red fringe! After receiving an energizing intro by fellow female artists Carly Pearce, Mickey Guyton and Gabby Barrett — Miranda brought the heat singing a montage of her hits from across the years including “Kerosene,” “Mama’s Broken Heart,” “Bluebird,” and “Little Red Wagon.” What a way to kick things off! 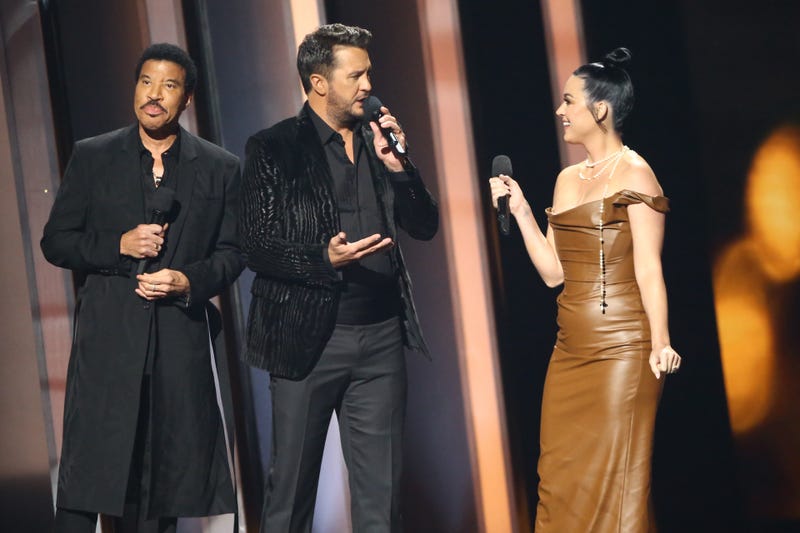 11 Luke Bryan Hosted… with some help

Luke has a lot of friends in Nashville and they all showed up to help him host. After a couple minutes kicking things off solo with a couple of jokes at his own expense, Luke was snuck up on by his fellow American Idol judges Lionel Richie and Katy Perry who stuck around to help him open the show. Luke would continue to be joined throughout the show by “surprise guests” who helped him with hosting duties from Darius Rucker, Elle King, Lady A and more. 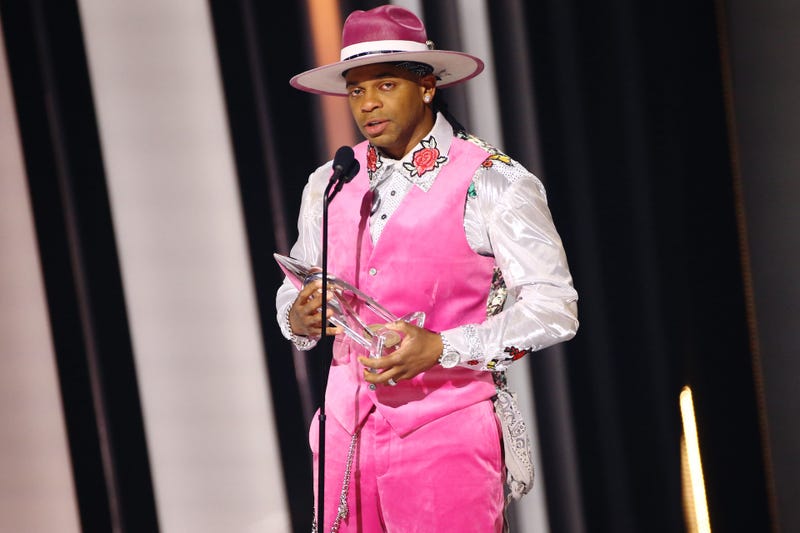 Jimmie Allen was revealed as the 2021 New Artist of The Year and immediately burst into tears, giving us one of the most touching moments of the night. After kissing his wife, Jimmie made his way to the stage with tears in his eyes and took a moment to compose himself before thanking his manager, Ash Bowers, and Charley Pride among other for inspiring him and helping him succeed. 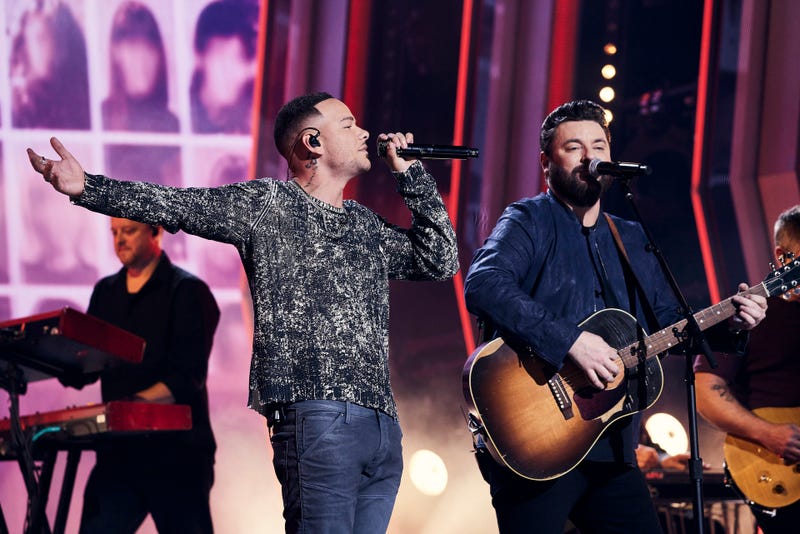 9 Chris Young and Kane Brown got funny with “Famous Friends”

While we’ve seen this pair perform their smash “Famous Friends” before, it’s never been quite like this! During their performance, Kane and Chris had superlative awards for fellow artists flash on the screens behind them along with throwback high school photos of each. Some of our faves were Tim McGraw being “most likely to have a misspelled tattoo” (is that true?), Scotty McCreery being “most likely to own an ice cream franchise,” Luke Bryan “most likely to win every talent show ever,” and Keith Urban “most likely to shred a guitar solo.” 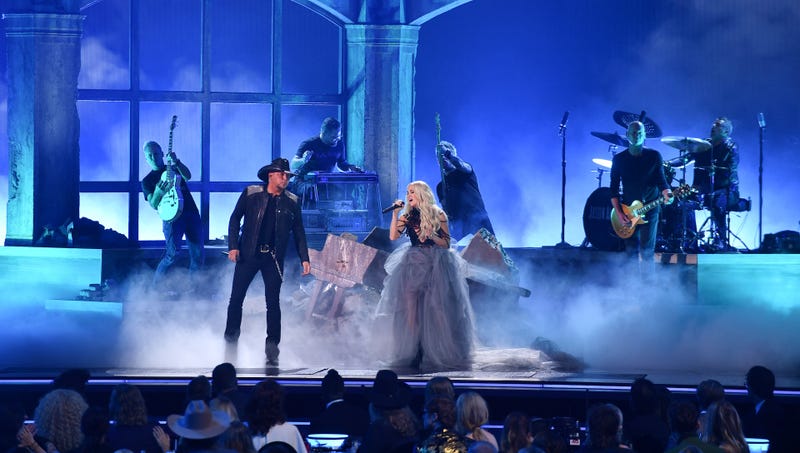 8 Jason Aldean and Carrie Underwood debuted “If I Didnt Love You” for the first time, live

There’s no doubt Jason Aldean’s duet with Carrie Underwood, “If I Didn’t Love You,” is an absolute smash, so it was a real treat to see the two take the stage for the first time together to perform it live! Jason in a dark suit and Carrie in a dramatic dark dress, the performance was nothing short of perfection! 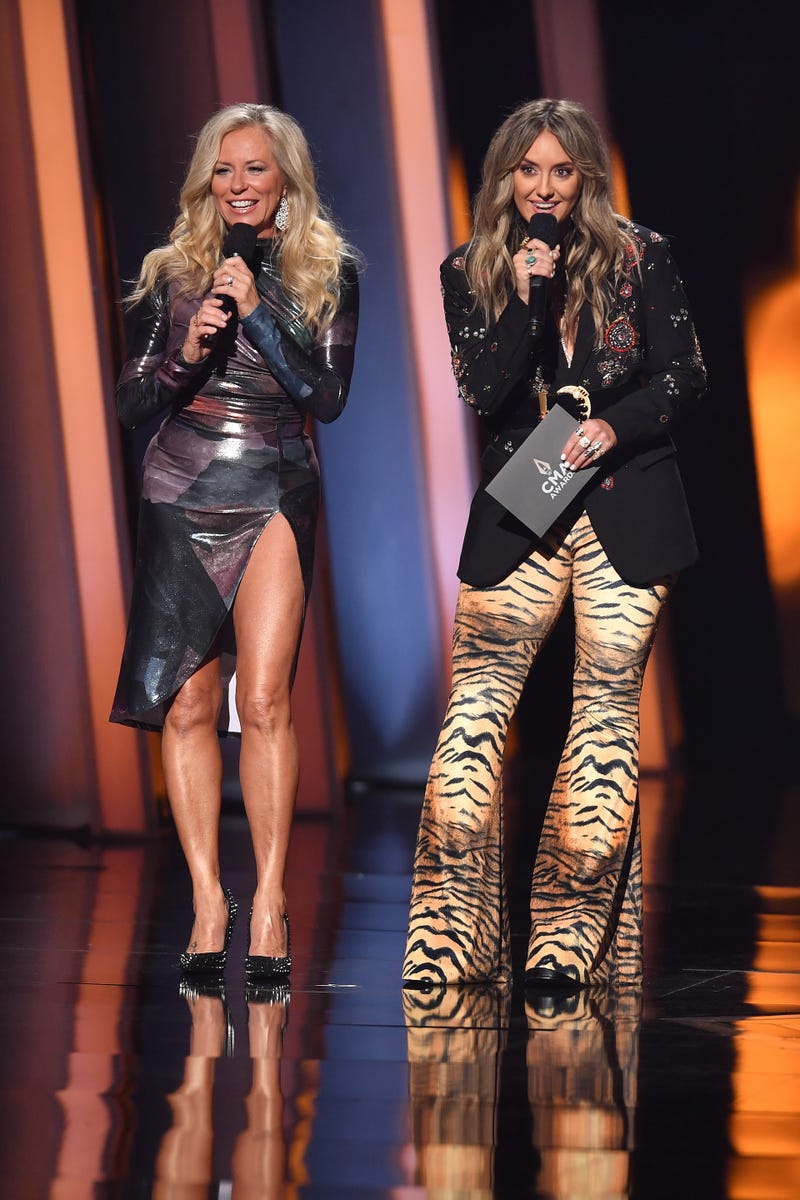 Country newcomer, Lainey Wilson and the legendary Deana Carter took to the stage to present the award for Single Of The Year, but they didn’t announce the winner before taking the opportunity to lead the crowd full of celebs in a sing along of Carter’s smash “Strawberry Wine.” The crowd didn’t need much convincing to join as they honored the 25th anniversary of the single that continues to be a staple in the genre. 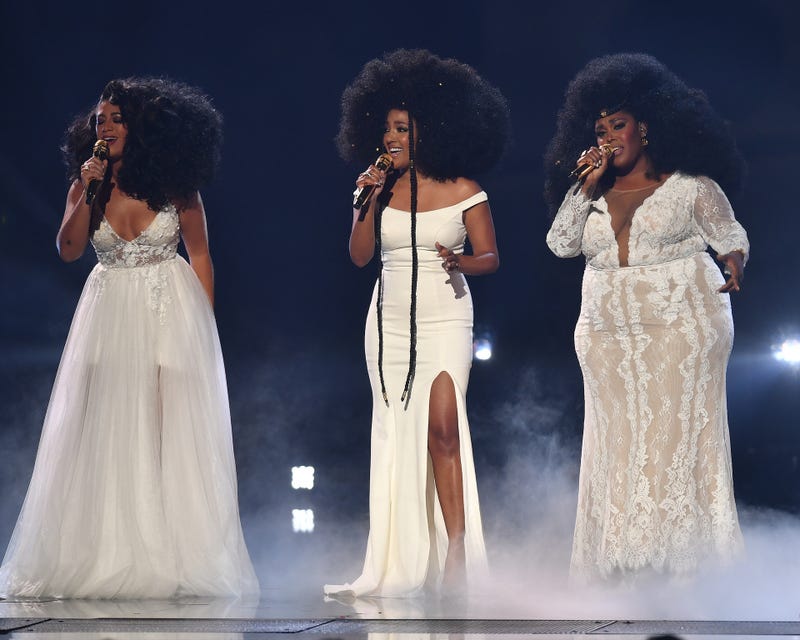 Mickey, Brittney and Madeline bared all, including their natural hair as they sang a new song by Guyton, “I Love My Hair.” Inspired by a high school student of color named Faith who was sent home from school for having “distracting hair,” the trio showcased the highest level of vulnerability and care as they stood strong as women of color, promoting acceptance for generations to come. From the moment high-schooler Faith introduced the trio flawlessly, the emotions remained high for a performance that will surely go down in history. 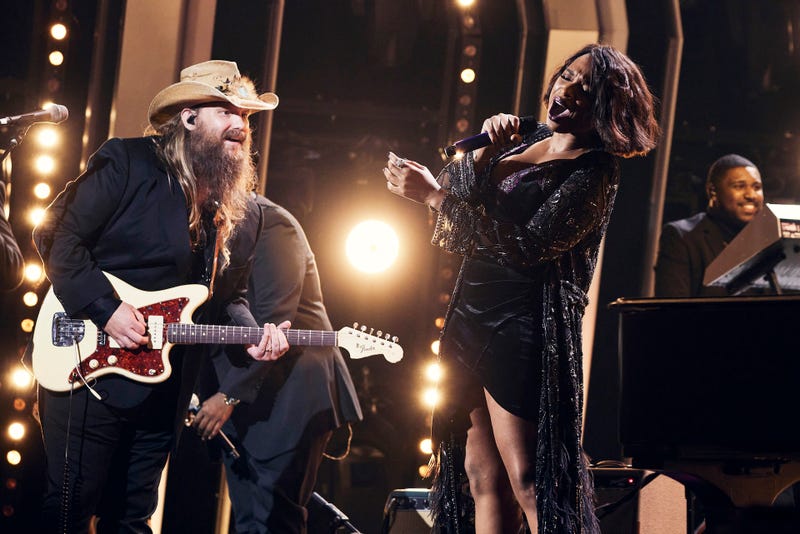 J-Hud and Stapleton brought some soul to the CMA Awards by performing a medley of songs honoring soul legend, Aretha Franklin and it was a welcomed change of pace for all! Jennifer led the crowd with a passionate vocal performance guided by Stapleton’s guitar and bluesy vocals and the crowd was FEELING it. The camera panned to some of the biggest stars in attendance dancing around like no one was watching and losing their ish over the magic that was Hudson and Stapleton together. WOW! 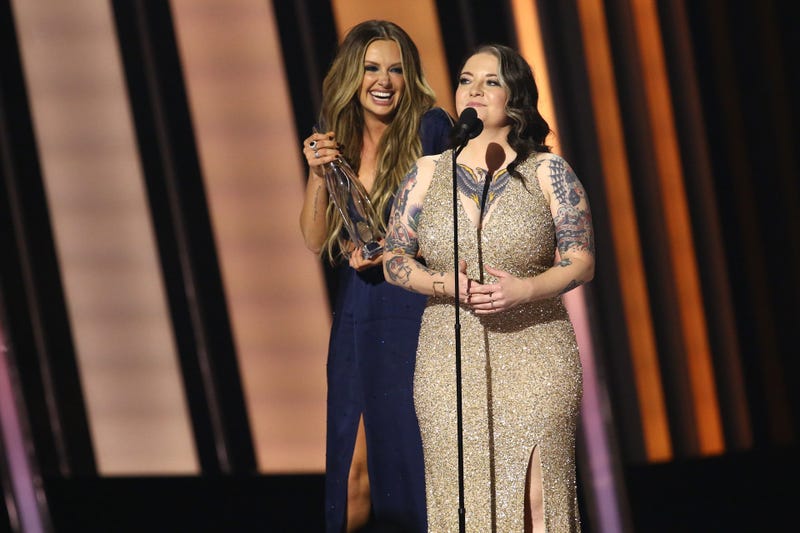 4 Ashley McBryde steps in to help a sister out

Carly Pearce was named Female Vocalist of the Year — a title she clearly didn’t expect to win as she froze and dropped to her knees upon the big reveal. With tears streaming down her face, Pearce struggled to get a hold of her emotions as her acceptance speech time ticked away. Carly’s struggle prompted fellow nominee and duet partner from earlier in the show, Ashley McBryde, to walk on stage and help Pearce get her acceptance speech started so she could fully enjoy the moment she’s dreamed about since she was a child. A full display of women helping women. 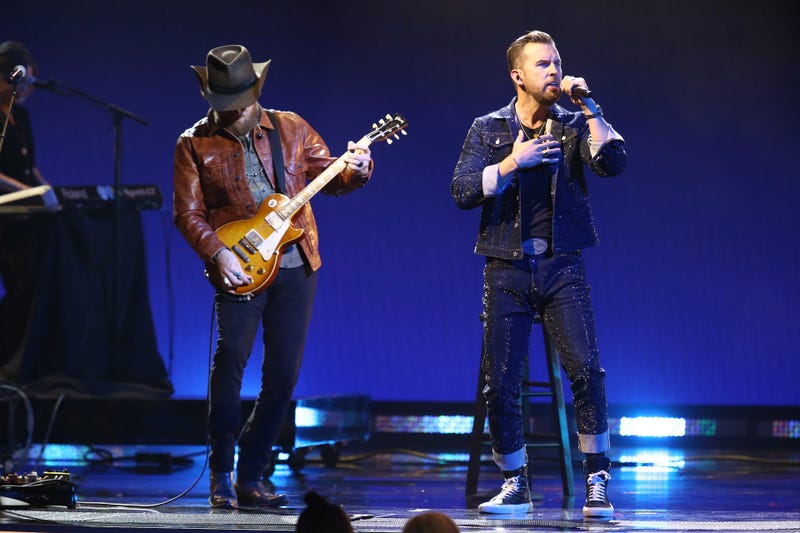 Brothers Osborne, who were named 2021 CMA Duo of the Year, took to the stage to perform their emotional song, “Younger Me,” and what a message it sent! Before starting the performance, brother TJ gave a brief monologue explaining the meaning behind the song for him as he publicly came out as gay earlier this year. While inspired by TJ’s journey, the song is a message to all to live their truth and do it unapologetically. 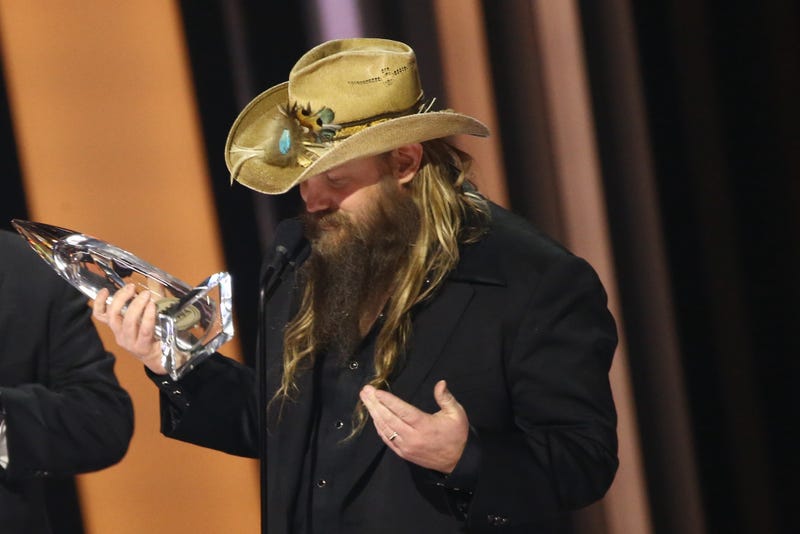 Chris Stapleton won big as he took home trophies for Album of the Year with Starting Over, as well as Song of the Year and Single of the Year for the title track. But wait, there’s more… Chris also scooped up the trophy for Male Vocalist of the Year. Let’s just say the night could’ve been called the Chris Stapleton Awards and we’re not mad at it! 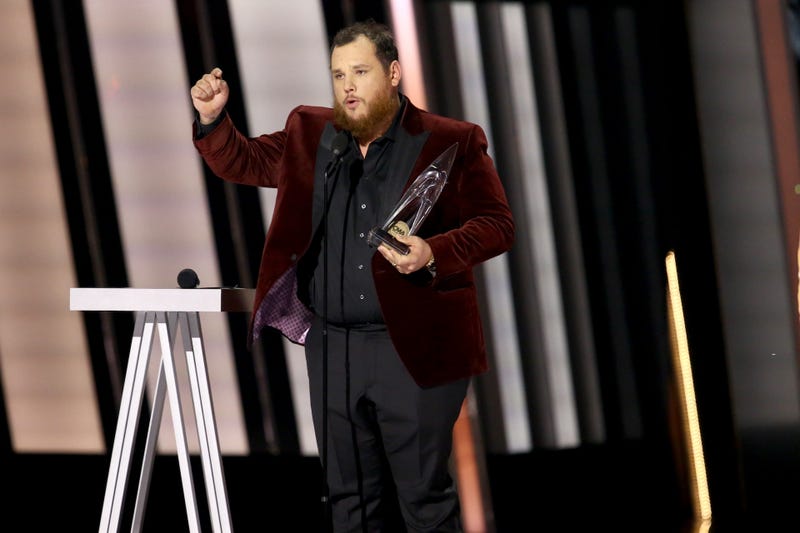 After debuting new music earlier in the show, Luke Combs, was crowned Entertainer of the Year and the crowd went wild. Luke was stunned and humbled by the accolade mentioning he was just trying to get over the fact that presenter, Alan Jackson said his name! A big congrats to Luke and team — after a night like tonight we’re even more grateful to have him as one of the Country music giants on our radios!