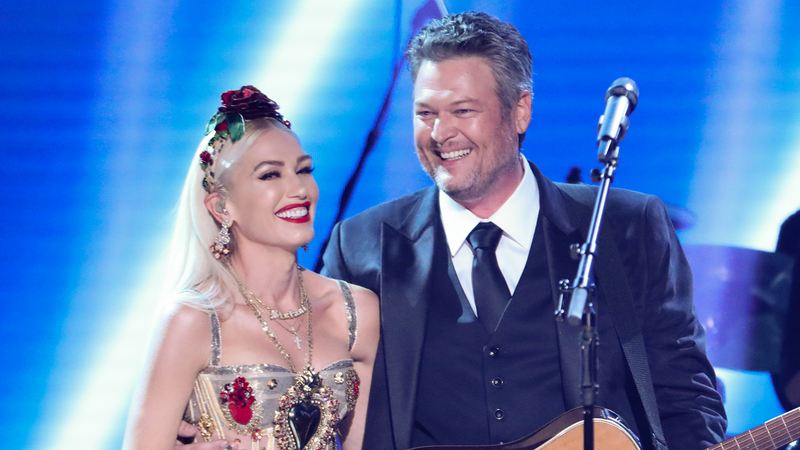 He’s a lot a bit Country and she’s a Rocksteady Cali girl, but together they make up the unexpected it couple of Gwen Stefani and Blake Shelton, and they’re here to fill us with Holiday cheer and fill their bellies with challenging recipes.

Don’t worry, we’re gonna explain, and we’ll start with the latter since you’re probably curious. While hosting Apple Music’s From Apple Music With Love, the No Doubt singer and her Oklahoma native hubby revealed the stories of musical inspiration, but also a bit about their lives and newfound family traditions.

“So every year, and this goes back to 2016, I think, you and I have this tradition. It’s really the only holiday tradition, I think, that we have, besides the obvious ones,” Shelton began sharing. “We go out of our way to find a recipe. And it’s always got to be the most difficult thing that you can imagine, whether it’s like a beef Wellington, which I didn’t even know what that was until I met you.”

While initially, Stefani wasn’t too fond and a little hesitant about this particular “tradition," she eventually came around and is now actually quite thankful for their new untraditional tradition.

“The fact that you wanted to make a tradition out of, it’s almost like an anti-tradition, because a tradition is something that you’ve done your whole life, and that you keep repeating.” Explaining that the idea made her uncomfortable, “because growing up as a child, my parents were very traditional.”

“So like the idea that now I somehow have control over what we’re actually putting in our mouths at Christmas, it makes me feel like I’m going to get in trouble,” she admitted. “So anyways, thank you for pushing me, pushing me to find new creative ways to feed our family.”

In other, yet still Christmas related news — the duo also shared that while preparing for the one-hour special they we’re bouncing ideas back and forth about what songs they’d sing; “We were talking a lot about doing covers and doing other people’s songs,” Stefani shared.

However, after going for a run on Shelton’s ranch, inspiration struck, leading to what also happens to be one of Gwen’s self-professed “favorite life moments” — she decided to write a Christmas song.

Well running in a open field led to an open mind — “and all of a sudden, this Christmas song called “Christmas Eve” came to my brain, it was like a miracle,” she recalled. “And I started booking back to the lodge because I was like, ‘Oh my gosh, I got to get my phone. Did I just write this song? How did this happen?’ And it was like a pure Christmas miracle. And I was like, singing it to my mom, my mom and dad were there, and I was like, ‘Does this sound like a church song? Did I copy this?’”

Gushing about his wife, and her song Shelton said, “I just loved the song and I loved the fact that you wrote it at the ranch.” In fact Blake is such a fan of “Christmas Eve” he covered the holiday track, which Gwen couldn’t have been happier about.

“You ended up covering that song, which was one of the greatest things ever," Gwen added. “It was just this full circle moment to have. You are one of my heroes, one of my musical heroes.”

And of course Blake being the southern gentleman that he is accepted the compliments… but did say the only difference in the two, talking about their different versions, “is yours is better.”