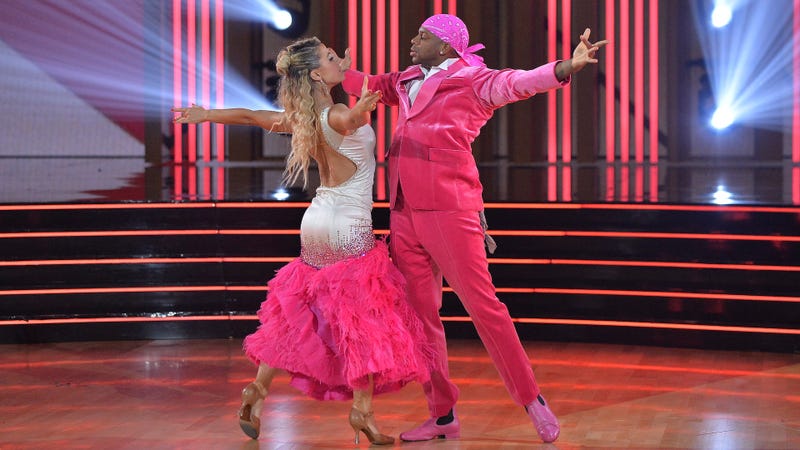 Jimmie Allen took to the ballroom floor with two dances honoring Rock band, Queen, Monday night for the seventh week of competition on ABC’s Dancing with the Stars.

Allen and his professional partner, Emma Slater, first performed a Viennese Waltz to the iconic group’s “Somebody to Love,” which Jimmie wrapped by presenting his wife, who was in the audience, with a bouquet of flowers.

In the second half of the competition, Jimmie showcased a Foxtrot to “Under Pressure” in the competition’s relay round. The round featured Jimmie going head-to-head against two other couples in hopes of earning extra points.

While Jimmie didn’t take away any extra points in the relay round, he was revealed as “safe,” thanks to high scores from his first dance and fan votes from super fans like Bryan McNeely…

Our emotions each week after watching Jimmie Allen perform: 🥰🥺😭😌 Thanks for giving us another Viennese Waltz to love!

Posted by Dancing with the Stars on Monday, November 1, 2021

“When it comes to constant growth and improvement, Jimmie's clearly someone whose work ethic sparkles as much as his outfit does,” said McNeely, a “Top Fan” of the show on Facebook. “He's openly emotional and sensitive and wants to do his best with what he does. That goes far here, both in judges' scores, but in the relatability factor with viewers as well. Maybe that's the formula for an entry into the finals. Jimmie's a stand-up guy doing a stand-up job.”

So what does Jimmie have to say to fans like Bryan?

“This guy deserves a massage or something!” Jimmie told Audacy’s Rob + Holly after they read him McNeely’s full comment. “Shout out to Bryan McNeely!”

Side Note: you know Jimmie has been practicing his dances a lot when the first reward that comes to his mind is a massage, Hah!

Don’t worry, the comment hasn’t gone to Jimmie’s head or anything as he continued on to share how focused he is on working hard to give a great performance next week.

“We don’t need to celebrate, we’re back to work today,” the “Best Shot” singer said, keeping his cool.

Catch Jimmie’s next Dancing With The Stars performance this Monday and be ready to rock out like a diva as the dancers tribute Janet Jackson.