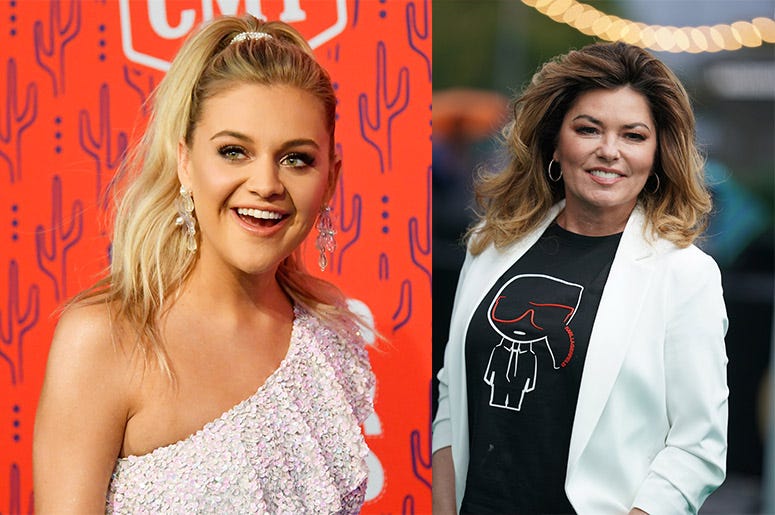 The original tune relies on Ballerini’s pop centric sound and notes of twang to illicit the vibe of a saloon rave. With the addition of Twain’s deep, velvety voice there’s a noticeable shift to a commanding tone. Fans can even hear Shania’s famous “let’s go” rallying cry, which precedes a raucous conversation between the two artists.
Who knew this song could pack more rebel into its notes?

We should have seen this collaboration coming after Wednesday’s 2020 CMA Awards. Kelsea graced the stage to perform the hit drinking song, wearing a jump suite and top hat similar to Shania’s outfit from the 1997 “Man! I feel Like a Woman” music video. The young star went a step further and shouted “Let’s go, girls!” at the end of her set. It’s all coming together!

Twain and Ballerini’s relationship grew from an email exchange they detailed during a recent episode of Today’s Country Radio podcast. Kelsea admits she was star struck first speaking with the legend. "I got an email from 'something Twain,' and I’m like, ‘Is this Shania?' And, basically, she had started the conversation of, ‘Let’s do something together,'" she says.

On #TodaysCountry Radio: Convos w/ @kesleaballerini & @shaniatwain who grace our cover this week in honor of their new collab #HoleInTheBottle.🍷 8am CT https://t.co/4Y8ziJRLfP @applemusic pic.twitter.com/dTNqVX8IRd

Shania complemented the young star on her ambition and commitment to song writing innovation. "She’s very serious about her writing, but she really gets the balance between relatability and not getting all wrapped up in the seriousness," Twain revealed.

"But … she was directing me all the way. It was really, really cute ... She’s actually a really good director, and she knows what she wants, and I really respected that."