Country star Kelsea Ballerini and RADIO.COM's Katie Neal had a chance to catch up this week about the singer's newly released single "hole in the bottle,' this time with the addition of the incomparable Shania Twain added to the mix.

But before the newfound BFFs got into music, Katie wanted to hear about how life at home has been for Kelsea while she makes a conscious effort to keep "health," her word of the year, a top priority.

"My word of 2021 is 'healthy,'" Kelsea explained on social media at the start of the new year. "I want to nurture and focus on my physical, mental, and emotional health that all took a bit of a backseat last year (anyone else?). Having a word for the year helps me stay focused and keeps my intentions set while I try to live a full life, stay creative, and be productive."

"When I do resolutions I always guilt myself if I don't stick to them them," Kelsea tells Katie. "Who actually sticks to something for 12 months? That's just kind of unrealistic. So, I started doing a word a couple of years ago and last year my word was 'grace.' Which, little did I know how much grace I would need for myself and for other people just navigating the mess that it all was."

"This year," Kelsea says, "I was just thinking about what I wanted to shift my focus to and I think last year I kind of ate whatever I wanted, drank whatever I wanted, and worked out whenever I felt like it in the name of just 'getting through it' -- and I think that I just wasn't treating my body very kindly. I wanted to really commit to being good to myself this year, whatever that meant, whether it's mentally or physically."

"So far, OK," Kelsea admits about her progress. "Someone just asked me about 'Dry January' and I was like, 'well, it's become damp!'"

We should all strive to have spaces to go, whether emotionally or creatively, to give ourselves a chance to take a breath and unwind from the stresses of daily life.

"I've had to figure out what those are for me," says Kelsea. "One is calling a friend, just checking in and getting out of my own head. Writing is a big thing for me, I think finding your outlet -- for a lot of people it's sports or exercise -- mine's writing. Also just moving... Fresh air and sunshine, that helps me a lot too."

Following Kelsea on the Gram, you'll notice that besides setting up her new home in the 'burbs with husband Morgan Evans, she's been getting in a lot of cooking (possibly captured above?) while off the road.

While she used to think cooking was incredibly boring, now she says she absolutely loves it. "I've always loved food," she explains, "everyone jokes that I'm the most food-motivated person that they know. So, I think I just combined my love of food and then needing to do something. I just got so antsy... so I was like 'well, I guess I'll learn how to cook.'"

Now Kelsea's had friends over so she could cook for them and even prepared a meal for her parents, who she says are "incredible cooks." "That says a lot about how confident I'm getting."

Kelsea's latest single, "hole in the bottle," which came out in May of 2020 has been steadily climbing the charts since its release and has just been given a makeover with the help of Shania Twain. The track has enjoyed tremendous success, despite Kelsea only getting a chance to perform it live once before the pandemic struck -- and that was before the song was even dropped.

It ended up being the song on the album that, for Kelsea, was an escape from the introspective, "discovering myself as a 20-year-old woman," vibe on the rest of the release. "'Hole in the bottle' was this fun escape from all of that," she explains. "And then last year happened and that's what everyone wanted -- a fun escape from everything happening. It ended up being this perfect gift that was the last song I wrote for the album that just barely made it."

The song has been the gift that keeps on giving for fans. The original track on her album kelsea, a toned-down version on her follow-up record ballerini -- and then of course the latest with Shania.

Kelsea explains how she sees each one differently as, "the 'kelsea' version is like the wine spritzer, the 'ballerini' version... you're gonna savor and sip it slow. The Shania version is like, barefoot -- 17 bottles!"

"The craziest part of all this, honestly," Kelsea says, "has been when people that I grew up listening to kind of turn around and reach out their hand to me and allow me to be on the stage with them. Taylor's done that for me, Allison Krauss, Trisha Yearwood, and Shania... This kind of feels like a full circle where I've obviously grown up listening to her and idolizing her and she just said, 'I like what you're doing. Whatever I can do let me know.'"

Watch the full interview with Kelsea and Katie above and stay tuned for more conversations with your favorite artists here on RADIO.COM.

But wait, there's more! Kick-off your weekend with Kelsea Ballerini on the Friday Night Takeover starting Friday night at 7PM. Plus, be sure to get your votes in for Rob + Holly's daily Top 7 @ 7 countdown! 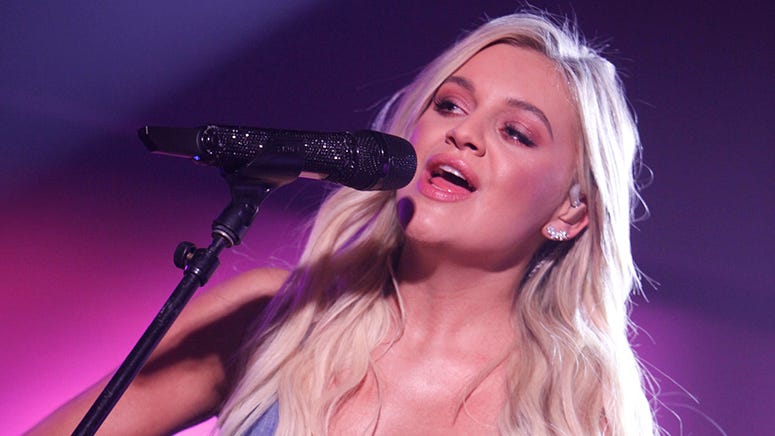