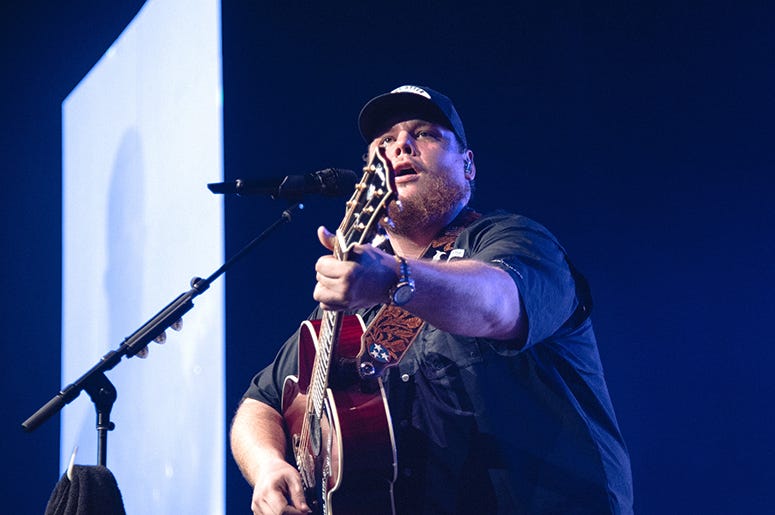 Featuring all 18 songs from the record, which spent over 25 weeks at number one on the Billboard Top Country Albums chart, the new release has some new tracks for fans to raise a glass to: "Better Together," "Cold As You," "Forever After All," "My Kinda Folk," "The Other Guy," and "Without You."

To celebrate the release, and give listeners some insight into his process, Luke gave us a breakdown of what you can expect from the 'Deluxe' offerings. Watch the Country star in the video below.

"Better Together," Combs says, was written "in the mountains of North Carolina" three years ago with songwriters Dan Isbell and Randy Montana. "We started there, people had always loved it," says Luke. "We ended up recording it and going with a very stripped down production of just me and a piano and I couldn't be happier with the way it turned out."

"'Cold As You,' I wrote this with two of the same guys I wrote 'Beer Never Broke My Heart' with," he says. "I think it's very similar. The idea was actually Shane Minor﻿'s idea, he's a really awesome guy and was willing to let me, and Jonathan (Singleton), and Randy (Montana) kind of take a little bit of a start that he had and run with it. Super pumped that I have another kick-a** song with two of my favorite guys and one of my new buddies, Shane Minor."

"'Forever After All' is the first song that I wrote in my house in Tennessee," says Luke. "I wrote it with Rob Williford and Drew Parker. It's one of those songs that we've been trying to hold back for a long time, and not play. We knew how much we loved it and how much we thought people would like it, so I'm glad that everybody's finally gonna get a chance to hear it. It's just kind of a continuance of the love story that you hear in 'Beautiful Crazy' and 'Better Together.'"

"'My Kinda Folk' is an idea that, actually, my guitar tech brought to me," Combs admits. "He had started it with my friend Dan Isbell and sent it my way. JD is his name, Jamie Davis. Him and Dan came out here with one of my utility players, Dustin Nunley and Ray Fulcher was living down the street at that time so he walked up. The five of us finished the song and it's probably one of my favorite songs that we've ever done."

"'The Other Guy,' Luke explains, "was a song that I wrote probably three and a half years ago... with Brendon Kinney and Rob Williford. When it came down to make this 'Deluxe,' it was just a song that I had always thought was great and it had always just been in this kind of state of limbo where somebody was gonna do it. So, I figured I would just do it."

"'Without You' is a song that I wrote probably a year and a half ago in the mountains of North Carolina with Wyatt Durrett and Dan Isbell. I always wanted to, along with 'This One's For You,' have a song that lets everyone know how appreciative I am of where I am," Luke says humbly. "The first verse is about my parents, and the second verse is about my wife, and the third verse is about you, the fans."

It's been quite a year for Luke. So far, he's released a handful of new songs, got hitched, hosted a fundraiser in support of struggling service industry workers effected by the COVID-19 pandemic, and held numerous live streamed events to keep his fans entertained while stuck at home.

I shotgunned a beer last night on national TV with @BrooksAndDunn. If you would have told me that 5 years ago I would have punched you for lying to me.

Be sure to pick up the new, deluxe album on shelves and streaming now, and look for Luke live on November 11 at the 2020 CMA Awards, where he's up for the coveted Entertainer of the Year award, as well as Male Vocalist of the Year, Album of the Year, and Song of the Year.

sports
Doug Pederson 'excited' for Jalen Hurts in 2021
sports
Jaylen Brown will miss the rest of the season due to injury
news
College students rescued from boat made of kiddie pools
news
FDA authorizes Pfizer vaccine for emergency use in kids 12-15
sports
Kenny Mayne announces he's leaving ESPN
sports
What might Stephen Curry's stats look like if there was a 4-point line?